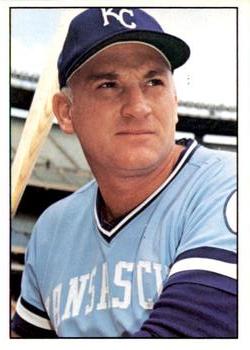 When Harmon Killebrew signed with the Kansas City Royals in January 1975, he brought two decades of baseball wisdom honed by major-league experience dating back to the early days of rock and roll. To borrow from a popular song title in 1954, Killebrew’s first year in the big leagues, one might say that he shook, rattled, and rolled the American League’s hurlers.1 In the first 21 years of his career, Killebrew had racked up 559 home runs for the Minnesota Twins and their progenitors, the first incarnation of the Washington Senators.

In what turned out to be a one-year sojourn with the Royals, the slugger nicknamed Killer added 14 homers to his power-hitting résumé and retired with 573 home runs; Killebrew’s aggregate stands above several Hall of Fame contemporaries, including Mickey Mantle, Reggie Jackson, and Willie McCovey.

During spring training, Royals right-hander Al Fitzmorris lauded his new teammate: “He can still swing the bat, which makes him a threat everytime [sic] he comes up to the plate. Since 1969 when I came to the club, one thing we’ve lacked with the Royals is a field leader. He’s a quiet man, but I think by his presence, he’ll be an inspiration.”2

Killebrew fulfilled Fitzmorris’s prophecy on May 23, banging two Ross Grimsley “shoulder-high pitches”3 over the Royals Stadium outfield fence during a 10-1 nighttime rout of the Baltimore Orioles. Coincidentally, Fitzmorris was the starting pitcher for the Royals that night.

Grimsley gave up Killebrew’s first homer in the first inning — a two-run bash that also scored Freddie Patek, who led off the game with a walk and a steal of second base. It was career home-run number 565 for the slugger, who was a little more than a month from his 39th birthday.

Kansas City extended the lead with three runs in the third inning. Killebrew hit his second two-run shot off the Orioles lefty. This time, Amos Otis, who led off the inning with a double, preceded him around the bases.

After the home run, Cookie Rojas singled, went to second base because center fielder Don Baylor made an error, and scored on Jim Wohlford’s left-field single for a 5-0 Kansas City lead, ending Grimsley’s night. Doyle Alexander became the first of two right-handers whom Earl Weaver used in relief.

Patek stole his second base of the game in the bottom of the sixth after drawing a one-out walk, then moved to third base on Otis’s fly out to Baylor. Alexander faced Hal McRae — who was to play in his first of three All-Star Games in 1975 — and stranded Patek at third when McRae fouled out to Bumbry in left field.

After throwing a shutout through six innings, Fitzmorris was dented in the top of the seventh. Bobby Grich led off with a walk, followed by Ken Singleton’s base hit that sent him to third base. He scored Baltimore’s only run of the night when Fitzmorris induced Lee May’s double-play grounder.

The Royals doubled their run count and ended any drama with a big inning after the seventh-inning stretch. Killebrew began the bottom of the seventh with the 11,109 fans at Royals Stadium wondering if he could pull off a homer trifecta. Alexander answered in the negative; Killebrew struck out looking.

The five-run jaunt began when John Mayberry and Rojas singled; Wohlford’s double scored Mayberry from second base and put Rojas on third.

Alexander loaded the bases by intentionally walking Brett, but Buck Martinez foiled the strategy when he tripled home three runs. Weaver replaced Alexander with Bob Reynolds, who gave up a run when Patek’s one-out fly to Baylor put Kansas City’s tally in double digits. Al Cowens pinch-hit for Otis, sending the Royals defense back to the field after a grounder to shortstop.

Killebrew had another chance for the second three-homer game of his career, but in his last at-bat of the night, he grounded to shortstop in the eighth.4 With his trademark humility explaining the home runs, he stated, “I just got lucky.”5 It was the 47th and last time in his career that he hit two homers in a game.6 Though the power hitter favored higher pitches, Grimsley, for reasons passing understanding, served up the home-run balls in Killebrew’s preferred region. “I haven’t made an adjustment in my swing the last five years,” revealed the soft-spoken slugger. “How do I hit my homers so high? I guess I was born to swing a bat in that groove.”7

Al Bumbry was the star of Baltimore’s lineup on this night. Though Bumbry knocked three doubles, his fellow Birds couldn’t advance him beyond third base. Primarily known as an outfielder but playing in the designated-hitter slot, Baltimore’s Tommy Davis went to Kansas City with a 16-game hitting streak; Fitzmorris prevented it going any further.

Killebrew served a similar purpose at the plate, batting in the DH slot for the later years of his career.

Royals fans engaged in Killebrew’s exploits may have missed Fitzmorris’s performance; he limited Baltimore to seven hits and one walk. He struck out three, including Baylor twice. Fitzmorris was a key hurler for the mid-1970s’ Royals: 13-6 in 1974; 16-12 in 1975; 15-11 in the AL West pennant-winning year of 1976.

The Royals’ victory kicked off a 5-1 homestand against the Orioles and the Yankees.

Between May 21 and June 3, they went 10-1. Their win against Baltimore was their second biggest margin of victory. On June 18, they beat the Angels 13-0.

For the Orioles, the loss reflected an opposite paradigm — second in a seven-game streak of losses. Baltimore went 5-12 between May 16 and June 3.

When Killebrew retired after the 1975 season, his devotees might have noted a diminished output, evidenced by a .199 batting average during his farewell year. But it’s likely that they would have highlighted a May night when he went yard twice.

1 “Shake, Rattle, and Roll,” written by Jesse Stone, was a 1954 hit single for both Big Joe Turner and Bill Haley & the Comets.

4 As a member of the Twins in 1963, Killebrew hit three home runs against the Boston Red Sox on September 21.