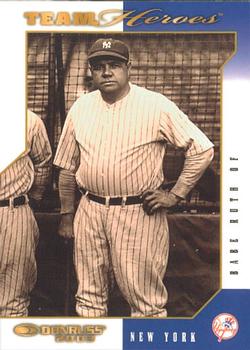 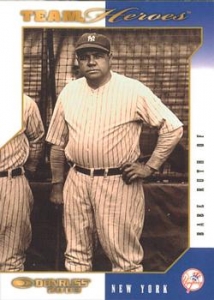 When the 1922 season began on April 12, the New York Yankees were without the star and face of the franchise Babe Ruth and slugger Bob Meusel, both of whom were suspended for six weeks after brazenly defying Commissioner Kenesaw Mountain Landis’s order not to barnstorm after the 1921 World Series.1 Landis had told Ruth in no uncertain terms that ignoring him would be “the sorriest thing you’ve ever done in baseball.”2 But Ruth was adamant and headed to Buffalo, where the tour was to begin. There was money to be made and the Bambino wasn’t about to let Landis rain on his parade. But rain the commissioner did.3

Ruth and Meusel wouldn’t debut until May 20, but the team weathered the storm with aplomb and after a 12-4 drubbing of the Cleveland Indians on May 19, the Yankees had a record of 22-11 and held a two-game lead over the second-place St. Louis Browns. Opinions about Ruth’s return varied. The Boston Globe wrote on May 20, “On this day the exile of the King of Swat expires, and the fans are crowding at the gates or waiting expectantly for news, confident that the Babe will knock one, perhaps two, out of the lot.”4 But the Philadelphia Inquirer was less enthusiastic, calling Ruth and Meusel “spoiled darlings of the fickle public.”5

The Yankees celebrated Ruth’s return by naming him captain of the team.6 But by the time the May 25 game against the Washington Senators rolled around, fans had turned on Ruth. He went 0-for-4 with a strikeout in his first game and was hitting an anemic .095 after a 5-3 loss to Washington on May 24. The locals derisively cheered when Ruth made two routine catches in the outfield against the Browns on May 22 and he responded with a contemptuous doff of his cap.

The New York Herald also took a swipe at Ruth after a 0-for-5 day against Walter Johnson, who pitched the Senators to a win over the Yankees on May 24. Light-slugging future Hall of Famer Sam Rice hit his first home run of the season, prompting the Herald to tease, “It begins to look as though almost anybody can hit a home run but the Babe. Nobody loves a fat man.”7 The catcalls heaped on him from the stands on May 25 finally became too much and Ruth snapped.

At 24-14, the Yankees held a 1½-game lead over the Browns going into their tilt with the Senators at the Polo Grounds in New York. Yankees skipper Miller Huggins sent 22-year-old right-hander Waite Hoyt to the mound to face 33-year-old journeyman Tom Phillips. Hoyt was 5-2 with a 2.84 ERA and had tossed 10 innings against the Browns only four days earlier in a 6-5 victory over St. Louis. Phillips was 2-6 with an abysmal 4.66 ERA and had only seven more major-league appearances ahead of him before landing back in the minors.

As he had in his first five games, Ruth was playing left field and batting third and Meusel was in his usual right-field spot and batting fifth behind third baseman Frank “Home Run” Baker. Only two batters in, Rice smacked an inside-the-park homer to left field to give the Senators a 1-0 lead. But the Yankees took a 2-1 lead in the bottom of the first. Whitey Witt led off with a walk, Aaron Ward singled on a bunt to put runners at first and second, and Ruth laid down a sacrifice to put runners at second and third. Baker shot a single to center and both runners scored, giving New York a one-run lead.

The second inning was relatively quiet but it was in the third that Ruth made a spectacle of himself and drew the ire of an umpire, and many in attendance. With one out, Ruth stepped to the plate and poled a hit to center that Rice fumbled, prompting Ruth to try to extend his single into a double. Rice threw the slugger out at second in a close play. Ruth came up with a handful of dirt and hurled it at umpire George Hildebrand.

“[Ruth] leaped to his feet with the quickness of a cat and he brought up with him a handful of dirt,” reported the New York Times, “which he threw in the direction of the umpire. From the grandstand it seemed that the dust spattered over Hildebrand’s face and neck. Some of it seeped down inside his collar and the rest fell on his arm and on the front of his blue uniform.”8

As Ruth walked off the field, many in the crowd jeered and hooted.9 Ruth returned the favor and mockingly doffed his cap as he headed to the dugout. At this, a fan yelled, “You goddamned big bum, why don’t you play ball?”10 With a crowd of only 10,000 on hand, Ruth had an easy time picking out the heckler. Ruth climbed onto the dugout roof and went into the stands, but the heckler had already distanced himself from his seat and was out of harm’s way.

Ruth was slowed by fans and someone in the crowd yelled, “Hit the big stiff!” Rather than continue his pursuit, the slugger returned to the dugout roof and challenged anyone and everyone to a brawl. “Come on down and fight! Anyone who wants to fight,” he shouted, “come down on the field!”11 As he exited the Polo Grounds, the catcalls grew louder.

Elmer Miller replaced Ruth in left field and went 0-for-2 with a strikeout. Fortunately for the Yankees, an equally-struggling Meusel, who was hitting only .100 going into the game, caught fire and blasted two home runs to lead them to a 6-4 win and a two-game lead over St. Louis. His first homer was a long drive into the left-field bleachers in the fourth inning that gave the Yankees a 4-1 lead. His second came in the eighth against Jim Brillheart, a line drive into the left-field seats that gave New York an insurance run in the 6-4 win.

The Senators made a game of it in the sixth when Joe Judge slammed a three-run homer into the upper deck in right field to tie the game at 4-4. But the Yankees responded immediately and broke the tie in the bottom of the inning on Wally Pipp’s single to center followed by Everett Scott’s double to left that gave New York a 5-4 lead.

American League President Ban Johnson announced that Ruth would be suspended until he had a chance to investigate his incident with Hildebrand. But Ruth missed only one game, was fined $200, and was stripped of his captaincy. His tenure had lasted all of six days.12

1 Pitchers Tom Sheehan and Bill Piercy were also suspended but Sheehan spent the 1922 season with the Double-A St. Paul Saints and Piercy had been traded to the Boston Red Sox on December 20, 1921.

3 In addition to the suspension, Landis also fined the players an amount equal to their World Series share.  Consequences for the Yankees could have been even more severe had pitcher Carl Mays and catcher Wally Schang accompanied Ruth as originally planned. They wisely backed out and helped the Yankees win their second straight pennant.

6 Some claim that Ruth was named captain in the winter of 1921-1922, but others, including Ruth’s SABR biographer Allan Wood, say the designation came on May 20. /bioproj/person/9dcdd01c

8 “Ruth in Row With Umpire and Fan at Polo Grounds,” New York Times, May 26, 1922: 1. Both Hildebrand and Ruth insisted afterward that the dirt didn’t end up in the umpire’s face, but landed on his sleeve.

12 “Ruth Is in Line-Up in To-Day’s Game, But Not Captain,” New York Evening World, March 27, 1922: 5. Senators owner Clark Griffith appealed to Ban Johnson to not suspend Ruth for more than a game because he desperately needed the gate receipts that Ruth would bring in over the last two games of a five-game series. Johnson was sympathetic to Ruth and chalked up the latter’s outburst, at least publicly, to his lengthy suspension at the start of the season, which caused him to lose his “batting eye” and endure criticism from fans. “Ruth plainly did not possess the mental strength and stability to brave this sudden reversal of public adoration,” Johnson announced to the press. “It served to warp his playing ability, and for days he has been nervous and irritable.”