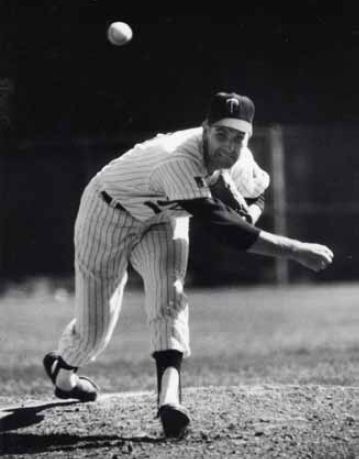 Sometimes the best deal for a major-league team is the one it doesn’t make.

In the first six weeks of the 1965 American League season, pitcher Jim Perry was given little opportunity to show the Minnesota Twins the truth in that adage.

From the start of spring training through the first 35 games of the regular season, the right-handed Perry tossed just 10⅔ innings: 7 in three spring-training appearances and 3⅔ innings in four regular-season appearances. Uninjured, but relegated to far end of the bullpen, Perry had been mentioned in trade rumors since the start of spring training.

At the start of the game against the Red Sox in Boston on May 26, it didn’t seem likely anything would change for the little-used right-hander, who had been mentioned in numerous trade rumors since the end of the 1964 season.

Twins workhorse Camilo Pascual was scheduled to start for the 22-13 Twins, who went into the game in second place, one game behind the league-leading Chicago White Sox. The Red Sox were in seventh place with a 17-19 record.

Pascual, who had averaged 256 innings a season in the Twins’ first four seasons in Minnesota, took a 5-0 record and a reputation as a warm-weather pitcher into the game, played on a day when the high temperature in Boston was 92.

The Twins, who had collected 20 hits in a 17-5 victory over the Red Sox the previous night, came out swinging. They scored four runs in the first inning – three on a two-out home run by Bob Allison off Earl Wilson – to stake Pascual to a 4-0 lead. But Pascual didn’t make it out of the second inning.

The Red Sox scored one run in the first, then erupted for five in the second to take a 6-4 lead. The scoring all came after Pascual had gotten two outs. Carl Yastrzemski’s bases-loaded double cleared the bases and chased the hard-throwing Cuban.

Perry, who was in his seventh big-league season, replaced Pascual. The first batter to face him was Felix Mantilla, who lifted a popup in front of home plate.1 Catcher Earl Battey dropped the ball and Yastrzemski, running with two outs, scored the fifth run of the inning before Mantilla was thrown out trying to advance to second on the play. While Perry was holding the Red Sox scoreless over the next three innings, the Twins made it 6-5 on a solo home run by Harmon Killebrew in the third and then regained the lead with four runs in the fifth. The Red Sox got one run back in the sixth to cut the Twins’ lead to 9-7, but also had a runner thrown out at the plate. Tony Conigliaro opened the inning by reaching first on an error. Eddie Bressoud followed with a double, with Conigliaro stopping at third. Bob Tillman singled to score Conigliaro, but Bressoud was tagged out at home by Battey (on a throw by center fielder Jimmie Hall). Left-hander Bill Pleis relieved Perry and went on to pitch 3⅓ scoreless innings before giving way to Al Worthington with two out in the ninth. Worthington got the final out to save Perry’s first victory of the season.

Perry had pitched 3⅔ innings (matching his season total to that point), allowing three hits and an unearned run.

“Perry pitched very well, especially when you consider he has not had much work,” said Twins manager Sam Mele. “His control might have been bad with so little work. He had good control and threw hard.”2

Perry said the speculation about his job security and the trade rumors didn’t distract him.

“I figured I would get my chance,” Perry remembered years later. “I just kept in shape. I worked in the bullpen. I threw all the time. I’d throw a lot of b.p. (batting practice). Hal Naragon, our bullpen coach, would say, ‘You can’t throw that much.’”3

The opportunity was a steppingstone for Perry, who was a valuable member of the Twins pitching staff in the second half of the season.

“After I got the chance to pitch [May 26] I won seven straight,” said Perry. “Camilo got hurt and I started [19 games] in the second half of the season. I always pitched the same. I pitched like I had a one-run lead, even if I had a six-run lead.”

During the stretch in which Perry won seven straight, the Twins went 34-20 to open a 3½-game lead over Cleveland on July 19.

Perry gave credit to Johnny Sain, who was in his first season as the Twins pitching coach. “Johnny Sain was great. He stressed control. He really built confidence in you. He always said, ‘Don’t talk [bad] about my pitchers.’”

1 According to the game report in the Minneapolis Tribune of May 27, 1965, “Yastrzemski scored from second when catcher Battey dropped Mantilla’s pop in front of the plate.” However, BaseballReference.com has the play scored as Battey’s error on a ground ball.

3 Phone interview with Jim Perry, August 2014. All subsequent quotes from Perry are from the interview.