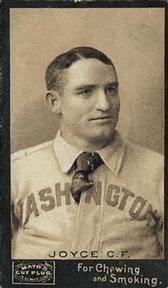 With Pennsylvania law still barring Sunday baseball,1 the Pittsburgh Pirates scheduled two games against the Washington Senators2 for Saturday, May 30, 1896, at Exposition Park.3 It was the first doubleheader of the season for both clubs, and a huge crowd was expected. The sixth-place Pirates (17-13) were looking to climb in the standings at the expense of the eighth-place Senators (15-17). Washington, however, had won the first game of the three-game series, 11-6, in a ladies day game, where “upwards of a thousand of these fairest and best of fans lent their loyal presence.”4

The first game of Saturday’s doubleheader was described as a “veritable slugging affair.”5 For the visiting Senators, Doc McJames, a rookie right-hander,6 got the mound duties. It was McJames’s eighth start of the season and his first since May 18; Washington had won just two of the games he had started to this point.

All accounts indicate that McJames struggled to locate the strike zone, and “when he did send one over it was generally hit to a place of safety.”7 Conversely, Washington “did very little batting until the seventh inning”8 against Killen. By then, the Pirates had rolled to a 13-run advantage – enough to hold off a late Senators rally, led by their captain, Bill Joyce, who hit for the cycle.

Joyce was an infielder (primarily a third baseman) who started his major-league career in 1890 with the Brooklyn Ward’s Wonders in the Players’ League. When the PL folded after the 1890 season, he signed with the Boston Reds (of the American Association), but the Association dissolved after that season. Joyce spent 1892 with Brooklyn’s National League team, the Bridegrooms, who traded him to Washington in the offseason.

Joyce “refused to play for the Senators at the salary offered,”9 so he waited until 1894 to sign a contract. The Senators named him team captain. In three seasons with Washington, he batted .355, .311, and .313. His on-base percentage was consistently near .500, as he placed in the league’s top 10 in walks every year he was with the Senators.

From the first inning, the game, as a Pittsburgh newspaper noted, was a contest of “biff, bang, biff,”10 and a concern arose that it might not end before the second game of the twin bill was scheduled to start. Even so, despite all the scoring, much more press was given to the lower-scoring second game of the day than to the opener, especially in the Washington newspapers.

The Pirates scored solo runs in each of the first three innings. Washington briefly took the lead with two runs in the top of the second, but Pittsburgh responded with the tying run in the bottom of the inning and the go-ahead run an inning later. Two more Pirates runs in the fourth were good for a 5-2 lead.

After a slow start, the visitors got their bats going in the fifth, as Killen’s curves and drops “were sent to every section of the ground.”11 The Senators scored a run in the fifth and another in the sixth.

But the Pirates continued to score, answering Washington’s fifth-inning tally with five runs for a 10-3 advantage. McJames did not return to the mound in the sixth; instead, Washington manager Gus Schmelz replaced him with Lester German. Unfortunately for the Senators, German “was no improvement.”12 The Pirates hit the right-hander freely, and at one point German walked in a run. By the time the inning finally ended, Pittsburgh had added seven more runs to its credit.

By the seventh inning, Pittsburgh had built a 17-4 lead, so Killen “devoted his entire attention to putting the ball over the plate, without overworking his arm.”13 That may have accounted for Washington’s subsequent burst of offense. Tom Brown opened the seventh with a single and scored on Joyce’s double. Billy Lush singled, driving Joyce across the plate. Charlie Abbey’s base hit tallied Lush, cutting the deficit to 17-7.

Connie Mack, Pittsburgh’s manager, was in his third season at the helm. (He also caught 10 games for the Pirates in 1896 in his final season as a player.) With the big lead, Mack left Killen on the mound in the eighth. German singled with one out. Brown followed with another single and Joyce walked to load the bases. A force out and a single by Kip Selbach resulted in two more runs for the Senators. Still, the 17-9 score “found the crowd in excellent humor.”14

Meanwhile, the Pirates had not threatened since the sixth inning, and German kept them off the scoreboard. In the top of the ninth, Washington gave the spectators “a genuine scare.”15 The first three batters reached, putting one runner (Jack Crooks) across home plate with Washington’s 10th run of the game.

An out later, Joyce hit the ball deep to the left-center-field fence for a three-run home run. With the round-tripper, he now had 10 total bases in the game. He received a standing ovation from the Pittsburgh crowd. Suddenly, with the score 17-13, the Senators were within four runs of tying it all up. Lush drew a walk, but Selbach and Ed Cartwright were retired, ending the game.

The first game was definitely an “exhibition of hit-and-run”16 baseball, as the teams combined to score 30 runs.17 Each team banged out 18 hits, and there were seven stolen bases in the game (four by Pittsburgh, three by Washington, including one by Joyce).18 McJames and German combined to walk 10 Pirates batters. Killen issued four free passes.

Every Pirates batter had at least one hit; Jake Beckley, Bones Ely, and Mike Smith each contributed three hits to the total. For the Senators, every hitter except McJames notched a hit. Brown had four singles, and team captain Joyce had collected a single, double, triple, and home run besides a walk. He had also scored twice.

The Senators did not lose their momentum from the first game. The late rally had “unnerved the Pirates and pickled them as easy meat,”19 so Washington roared back in the afternoon contest, winning decisively, 8-1. Lush and Joyce starred for the home team, collecting between them three hits, four walks, and five stolen bases. The Washington Post wrote of Joyce’s doubleheader performance: “Altogether it was a great day for Joyce, who went nine times to bat and made six hits, two singles, a double, two triples, and a homer, a total of fourteen bases, which figured in the making of ten of Washington’s runs.”20

A total of 15,000 fans turned out for the doubleheader (approximately 4,000 for the morning game and 11,000 in the afternoon). According to the Washington Post, the afternoon crowd “flowed over the seats into the field,”21 forcing Washington’s captain Joyce to insist on a ground rule: “A hit into the crowd was good for three bases.”22 It just so happens that Joyce was one of three batters in the second game to have a triple, giving him two three-baggers for the day.

With his performance in the morning game, Joyce had hit for the cycle. He became the second player to accomplish the rare feat in 1896. (On May 9, Boston’s Herman Long had also hit for the cycle, as Long’s Beaneaters defeated the Louisville Colonels.) In addition, Joyce had become the third and last player in the nine-season Washington franchise history23 to hit for the cycle, joining Bill Hassamaer (June 13, 1894, against the St. Louis Brown Stockings) and Ed Cartwright (September 30, 1895, against the Beaneaters).

At the end of June, the Senators still had a (barely) winning record of 27-26-1. July brought a skid, as they lost 20 of 28 games. Joyce was traded by Washington to the New York Giants on August 1 for Duke Farrell, Carney Flynn, and $2,500.24 A week later, Joyce was managing the New York team. 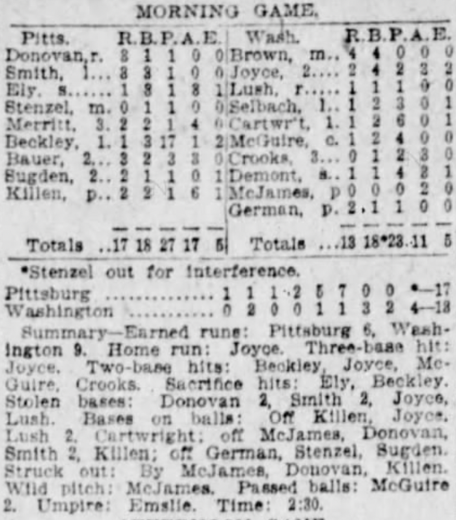 1 In the November 1933 election, Pennsylvanians in larger cities and towns (not so much in rural areas) voted to permit Sunday sports, effectively ending a bill passed in 1794 that banned playing sports in the state on Sunday. The restriction, however, was still in effect in 1896. John Lucas, “The Unholy Experiment – Professional Baseball’s Struggle Against Pennsylvania Sunday Blue Laws 1926-1934,” found online at https://journals.psu.edu/phj/article/view/23525/23294. Accessed January 2022.

2 Baseball-Reference.com states that the Washington team’s nickname was the Senators, while Retrosheet.org uses the Nationals.

3 Between 1890 and 1911, United States government regulations required that the names of all cities and towns ending with “burgh” be spelled without the final “h.” Accordingly, the city of Pittsburgh was known as “Pittsburg” during this period. “Pittsburgh with the ‘H’ Please: Geographic Board Reconsiders Dropping Final Letter,” Pittsburgh Post, July 22, 1911: 1. This article uses the current “Pittsburgh” spelling, except in reference to publication titles or direct quotations using “Pittsburg.”

17 According to the Washington Post, only seven runs were earned by each team. The Pittsburg Press reported that the Pirates had six earned runs, while the Senators had nine.

18 According to the Washington Post, Pittsburgh had five stolen bases and Washington had three.

24 According to Joyce’s SABR biography, after Washington dropped to ninth place in the National League standings, Joyce and Schmelz disagreed on how to manage the team. The solution resulted in Joyce being traded to the Giants.