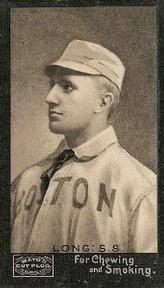 Three weeks had passed in the National League’s 1896 season, and the Boston Beaneaters were fighting for first place. They trailed Philadelphia by a game and Pittsburgh by a half-game. By contrast, Louisville was entrenched in last place, 10½ games back. With a 2-16 record, the Colonels had been outscored 155-69 by their opponents. The Beaneaters and Colonels were scheduled to complete a three-game series on May 9 at Louisville’s Eclipse Park. The visitors had handily won the first two games, 17-6 and 7-0.

Right-hander Willard “Little Willie” Mains pitched for Boston, his third start of the season. His fastball was described as if “the balls were fired from a cannon.”1 He had spent several years in the minor leagues but had been called up to the majors in 1888 (for two games with Chicago in the National League), in 1891 (with both Cincinnati and Milwaukee2 of the American Association), and finally in 1896, with the Beaneaters.3

Louisville’s August “Gus” Weyhing was a local product. The 29-year-old right-hander was born in Louisville, but he did not start playing for his hometown team until 1895, his ninth season in the major leagues.4 This was Weyhing’s fourth start of the season, and he was in search of his second win. Unfortunately for Louisville, the Beaneaters had no problems with Weyhing’s “assortment of parabolic curves.”5

The Colonels elected to bat first and “started the game with a rush.”6 Fred Clarke led off with an infield bunt single and moved to third on a passed ball. Frank Eustace drew a walk and the pair of runners pulled off a successful double steal, with Clarke scoring. Eustace scored on Doggie Miller’s single to center, and Miller “galloped home on [Billy] Clingman’s hot drive” to right field. The first four batters had reached, and the Colonels had a 3-0 advantage.

Boston answered quickly in the bottom of the first. Weyhing walked Billy Hamilton, who advanced to second on a passed ball. Herman Long sent the ball over the left-field fence for a two-run home run. With the Colonels ahead after the first inning (a potentially rare occurrence), the Louisville Courier-Journal reported that “the bleachers suggested calling the game on account of darkness.”7 Perhaps the fans were anticipating what was to come. The Boston Post commented, “Up to the third inning the game was real exciting and very much in doubt.”8

In the fateful third, Boston’s batters jumped on Weyhing and “left the Kentuckians in a stupor until the close of the game.”9 Bobby Lowe singled and Hugh Duffy doubled, putting two runners in scoring position. Charlie Ganzel sent a fly ball to short right field, but second baseman Miller fumbled the catch, and Lowe scored.

An out later, Tommy Tucker singled over second, driving in Duffy.10 Joe Harrington’s triple plated both Ganzel and Tucker. Mains helped his own cause with an RBI single to right, and the Beaneaters led 7-3. Hamilton forced Mains at second before Long doubled. Both runners were stranded when Weyhing retired Lowe, but Boston had sent 10 batters to the plate and scored five runs, and it appeared as if “the Colonels were in a trance.”11

The Beaneaters added a run in the fifth. Mains singled to left to start the inning, and after Hamilton was retired, Long forced Mains at second. Lowe singled for his second hit of the game, putting runners at the corners. This time, it was Boston that attempted the double steal. With Duffy batting, Lowe started for second and “allowed himself to be held between the bases till Long crossed the plate”; Boston led, 8-3.12

Louisville notched a pair of tallies in the sixth. Charlie Dexter reached on an error by Long and scored on a play in which both left fielder Duffy and third baseman Harrington made errors. Weyhing reached when Duffy misplayed a pop fly to left and scored when Clarke singled to center. The deficit was down to 8-5, but Clarke ended the threat by unsuccessfully trying to steal second.

Boston matched the Colonels’ runs in the bottom of the inning. Duffy singled but was forced at second by Ganzel. Jimmy Bannon singled and Weyhing hit Tucker with a pitch, loading the bases. After Weyhing picked off Bannon from second, Harrington singled Ganzel home. Mains singled to drive in Tucker, but Harrington was thrown out at the plate as he tried to score.13

The Beaneater hit parade continued in the seventh. Hamilton walked and scored on Long’s “slashing three-bagger,”14 his third hit of the game, into the left-center gap. Long scored on a fly out by Duffy. Boston’s lead was 12-5.

In the eighth, Boston “ripped the ball up the seam.”15 According to the Courier-Journal, Bannon “started the fusillade of hits”16 with a double. He scored on Harrington’s single up the middle, and Harrington moved to second on an error by rookie center fielder Chick Fraser.17 Mains was retired, moving Harrington to third, and then Hamilton drove an RBI single to left field. Long singled to right and Lowe singled to left. Duffy grounded a ball to Eustace, but the shortstop booted it, and “when the smoke lifted and cleared away the visitors discovered five more runs to their credit.”18 Louisville did nothing in the ninth, and Boston won, 17-5.

Weyhing received the brunt of the Boston batting, allowing hits in every inning but the second. The newspaper accounts revealed that only five of the 17 Boston runs were earned. Boston banged out 21 hits, compared with Louisville’s seven safeties.

With the single in the eighth, Long had completed hitting for the cycle. He was in his eighth season in the majors, seventh with Boston.19 He became the first player to hit for the cycle in 1896. On May 30, Washington’s Bill Joyce also hit for the cycle, in the morning game of a doubleheader against the Pittsburgh Pirates. Long’s rare achievement also marked the first time in Boston’s franchise history20 that a player had hit for the cycle. For the season, Long batted .345 with 101 runs batted in, both career highs. He also had six homers, which led the team.21

Boston had swept the Colonels in three games, twice posting 17 runs. For the 1896 season, Boston had won eight of its 12 games against Louisville, winning four at home and four on the road. The Beaneaters finished the 1896 campaign in fourth place, 17 games behind the pennant-winning Baltimore Orioles, then won the NL pennant in each of the next two seasons.

Louisville’s manager John McCloskey22 was replaced after this game by Bill “Gunner” McGunnigle. According to the Boston Globe, McGunnigle had arrived before the game and spent an hour “in the [club’s] directors’ box”23 watching the game. McGunnigle signed a two-year contract24 and was given complete charge of the team. Still, Louisville continued to struggle; McGunnigle’s record at the helm was 36-76 (.321), and the Colonels finished the 1896 campaign in the league’s cellar.

2 In August 1891 Milwaukee’s ownership bought the Cincinnati club and played its remaining schedule in the American Association.

3 Boston had selected Mains in the 1896 major-league draft (from Lewiston in the Class B New England League), but then sold him to Bangor on June 13. Mains had pitched in eight games for the Beaneaters (starting five) and won three of five decisions.

5 “Weyhing Pounded Unmercifully by the Bostons.”

6 “Weyhing Pounded Unmercifully by the Bostons.”

7 “Weyhing Pounded Unmercifully by the Bostons.”

10 The Boston Globe reported that “Tucker hit a slow one to Miller,” but the second baseman’s throw pulled first baseman Bill Hassamaer off the bag. Tucker was safe and Duffy scored. See “Could Not Hit Mains,” Boston Globe, May 10, 1896: 2.

12 “Weyhing Pounded Unmercifully by the Bostons.”

15 “Weyhing Pounded Unmercifully by the Bostons.”

16 “Weyhing Pounded Unmercifully by the Bostons.”

18 “Weyhing Pounded Unmercifully by the Bostons.”

19 In January 1890, Long had been sold to the Beaneaters by the Kansas City Cowboys.

22 McCloskey, a Louisville native, managed the Colonels in 1895, when they finished 35-96 (last place in the NL), After the poor start in 1896, he was replaced by McGunnigle. McCloskey was absent from the majors until 1906, when he became the manager of the St. Louis Cardinals. His career managerial record was 190-417. According to the Boston Post, McCloskey was to be “retained on the payroll, for the present at least.” See “In Second Place,” Boston Post.

24 “In Second Place.” McGunnigle did not return as manager in 1897. Instead, Jim Rogers managed the team until June 16, when Fred Clarke became the team’s skipper.