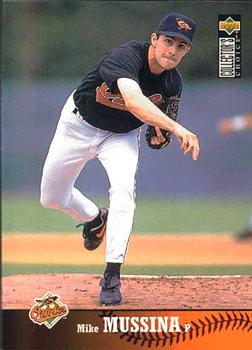 The Baltimore Orioles were flying high as June 1997 approached. The 34-15 Orioles carried the AL’s best record, and a 7½-game lead over the New York Yankees in the AL East Division, into a two-game weekend showdown against the AL Central-leading Cleveland Indians. Baltimore opened the 1997 season with a four-game winning streak and maintained the division lead since Opening Day. The Orioles were building upon the previous season’s success, when they finished second in the AL East and defeated Cleveland in the Division Series before losing to New York in five games in the Championship Series.

Baltimore boasted a powerful offense, hitting a record 257 home runs in 1996,1 led by Brady Anderson (50), Rafael Palmeiro (39), and Bobby Bonilla (28). Their starting infield all hit at least 20 homers apiece and four Orioles topped 100 RBIs. After the season, the club shifted its focus from offense to pitching and defense,2 adding veteran pitcher Jimmy Key, slick-fielding shortstop Mike Bordick, and key bullpen components, while losing Bonilla, Eddie Murray, and Todd Zeile to free agency.3 Embattled second-year manager Davey Johnson, who had the best record among active major-league managers entering the season, was excited about Baltimore’s changes and its playoff prospects. Although his reputation as a controversial figure preceded his arrival in Baltimore, Palmeiro noted his clubhouse demeanor: “I saw him as arrogant. But when I got a chance to play for him, I saw he has a lot of respect for players. I’d call him a players’ manager.”4

The 27-22 Cleveland Indians, managed by Mike Hargrove, led the Milwaukee Brewers by 3½ games in the AL Central Division. The Indians had dominated the division for the past two seasons but wanted to atone for their disappointing ALDS loss in 1996. The ballclub had solid offense, bullpen depth, infield defense, and bench strength, though the starting rotation wasn’t deep.5 The offense was led by future Hall of Famer Jim Thome, but table-setter Kenny Lofton and slugger Albert Belle departed during the offseason.

Mike Mussina, Baltimore’s ace and that evening’s starting pitcher was among the top five pitchers in Cy Young Award votes for three consecutive years. A Gold Glove winner and three-time All-Star, he established career highs with 243⅓ innings and a team-record 204 strikeouts during1996.6 The veteran developed a varied pitching repertoire, throwing a two-seam fastball, four-seam fastball, knuckle curve, cut fastball, overhand curve, changeup, and slider.7 Mussina entered the matchup with a 6-1 record and 4.26 ERA over 63⅓ innings. He won three of his previous four starts, including a victory at Cleveland six days earlier when he struck out a season-high nine in seven innings. Mussina frequently struggled against Cleveland; the win was only his third against the Indians in nine decisions. After his victory, he commented, “The last two times I pitched here, the playoff game and this game, were probably the best two games I’ve thrown against Cleveland in a while, especially in this ballpark [Jacobs Field].”8

Charles Nagy started for Cleveland. The Indians ace and 1996 All-Star compiled a 6-2 record and 3.82 ERA in 77⅔ innings. His last appearance was against the Orioles in Cleveland, the night after Mussina’s win. He had allowed three runs in seven innings. Three times Baltimore had rallied to tie the score but never pushed ahead.9 Nagy relied on a sinker, slurve, splitter, and changeup to disrupt hitters’ timing.10

Nagy immediately encountered trouble. Leadoff hitter Anderson doubled down the right-field line. Roberto Alomar beat out a bunt and Anderson went to third. Palmeiro hit a looping single into right field, scoring Anderson with the game’s first run. Cal Ripken Jr. grounded out on a high chopper for the first out, but both runners moved into scoring position. Jeff Newman, managing for Hargrove who was attending his daughter’s high-school graduation,12 issued a rare first-inning intentional walk to B.J. Surhoff, opting to face Pete Incaviglia. Surhoff was hitting .387 in 31 at-bats against Nagy, while Incaviglia was 2-for-7.13 The decision worked: Nagy struck out Incaviglia and Tony Tarasco to escape the inning.

Mussina quickly retired the Indians on three groundouts in the second inning. Nagy retired the Orioles on two groundouts and a strikeout. In the third inning, Mussina set down Cleveland on two strikeouts and a fly out by ninth-place hitter Omar Vizquel, who was the first Indians batter to reach the outfield.

Roberto Alomar started the home half of the third with a single to second baseman Tony Fernandez and went to second of Fernandez’s wild throw. Palmeiro’s groundout sent Alomar to third, and Alomar scored on Ripken’s fielder’s choice. Surhoff followed with a fly out and Incaviglia struck out again as Baltimore moved ahead 2-0 after three innings.

The Indians struggled against Mussina; in both the fourth and fifth innings, they mustered two groundouts and a strikeout. Nagy matched Mussina’s effectiveness, though not his dominance, as the Orioles managed one hit in the fourth inning and loaded the bases in the fifth on two walks and a hit batsman. They failed to score in either inning. Mussina appeared increasingly overpowering in the sixth inning, retiring the Indians on a pop fly and two strikeouts. While walking toward the dugout after striking out Vizquel to end the inning, he received a semi-standing ovation as the crowd sensed a special game unfolding.

Chris Hoiles led off the Baltimore sixth with a single to shortstop and went to second on Vizquel’s wild throw. Bordick grounded out to first and Hoiles reached third. Anderson singled into center, scoring Hoiles for a 3-0 lead. Anderson eventually took third on a stolen base and groundout, but was stranded on a popout.

In the seventh Grissom became only the second Indian to reach the outfield on a batted ball when he flied out to right field. Mussina continued piling up groundouts, as both Franco and Thome grounded out to second. Baltimore’s ace walked off to an increasingly louder ovation as the fans rose for the seventh-inning stretch. Baltimore threatened again in the bottom half when Surhoff’s single and Tarasco fielder’s choice put two Orioles on base with one out. But Nagy stifled the threat, getting a fly out and a groundout.

Mussina retired the Indians on a popout and three fly outs during the eighth inning. Through eight innings he had remained perfect, retiring all 24 Indians hitters. Paul Assenmacher relieved Nagy in the bottom of the inning. Nagy had allowed three runs (one earned) in seven innings. Anderson grounded out, then Roberto Alomar singled to center, his third hit in the game. He was caught stealing in a “strike ’em out, throw ’em out” double play.

Fans rose to their feet as the ninth inning began: Mussina was pitching a perfect game so far. Fernandez, leading off, worked the count to 3-and-1, then grounded out to second. The next batter was Sandy Alomar Jr., Roberto’s brother. Mussina was two outs from becoming the first Oriole to pitch a perfect game. On a 1-and-1 pitch, Mussina threw a fastball slightly up in the strike zone on the inside part of the plate; Cleveland’s catcher laced a single into right field, ending Mussina’s bid to hurl a perfect game and become the first Orioles pitcher to throw a no-hitter since 1969.14 After Alomar singled, the crowd gave Mussina a rousing ovation. Mussina completed the shutout by striking out the next two batters, pinch-hitter Brian Giles and Grissom.

Baltimore’s ace pitched a masterpiece though he didn’t think he had pitched better than in previous starts. Mussina commented, “The whole game I was really amazed I was still in that situation. I haven’t been in that situation in 12 or 15 years. It was kind of strange, but every time I went out there, they made three outs in a row.”15 Cleveland’s hitters complimented their mound opponent; Sandy Alomar Jr. said, “He pitched an outstanding game. He had everything going – fastball, curveball, changeup. He was perfect.”16

Mussina threw 115 pitches in the game during his brilliant performance; 77 were strikes. He struck out 10 hitters and induced 11 groundouts and six outs on fly balls or popups. His second career one-hitter increased Baltimore’s lead over New York to 8½ games. A few weeks later he became a four-time All-Star. He completed 1997 with a 15-8 record and a 3.20 ERA in 224⅔ innings. Baltimore’s ace finished sixth in AL Cy Young Award voting, won his second Gold Glove, and was fourth in the league with a career-high 218 strikeouts.