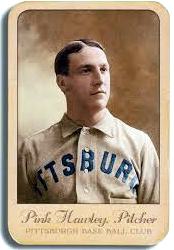 Pink Hawley’s pitching and Bones Ely’s bases-loaded home run led Pittsburgh1 to a 9-1 win over Cincinnati, capping a three-game sweep in the Pirates’ first homestand of 1897.

As 1897 opened, Emerson “Pink” Hawley and Frederick “Bones” Ely were Pirates mainstays. Hawley arrived in a trade with the St. Louis Browns before the 1895 season and immediately emerged as one of the game’s best pitchers. Only Cleveland’s Cy Young topped his 31 wins that year; nobody pitched more innings than his 444⅓. Baseball-Reference credits Hawley with 10.0 Wins Above Replacement (WAR) in 1895, second to Young among National League pitchers and more than any other Pittsburgh pitcher since the franchise joined the National League in 1887. Known as the Duke of Pittsburgh for his stylish clothes and handsome appearance, Hawley pitched less effectively in 1896 but still earned more WAR than all but two other National League pitchers.

By 1896, Ely had joined Hawley and the Pirates in another winter deal with the Browns. The tallest major-league shortstop of the 19th century at 6-feet-1, he was a steady and durable presence in Pittsburgh’s infield, seldom missing a game in five years as a starter from 1896 through 1900.

Hawley and Ely spearheaded Pirates’ wins in the first two games of Cincinnati’s early-season visit in 1897. On May 6 Hawley frustrated the Reds in Pittsburgh’s 3-1 win. Inconsistent in three prior starts,2 the 24-year-old right-hander limited Cincinnati to seven baserunners, all on singles. “Hawley was at his best … and made monkeys of the [R]ed [L]egs,” the Pittsburg Post praised.3

A day later, the Pirates erased a three-run seventh-inning deficit with run-scoring triples by Ely, Denny Lyons, and Joe Sugden. The 34-year-old Ely smashed four hits, scored four runs, and played flawless defense in Pittsburgh’s 7-6 win, their seventh in 10 games under first-year player-manager Patsy Donovan.4 “Those who missed yesterday’s game missed one of those pulling, tearing and hair-raising contests which have made the game so popular,” the Pittsburg Post reported. 5

Saturday’s series finale was Jesse Tannehill’s turn in Pittsburgh’s three-man pitching rotation of Hawley, Tannehill, and Frank Killen. But Killen had pitched the second Cincinnati game and Donovan preferred not to follow one left-hander with another.6 Instead he started Hawley on one day’s rest.

Venerable second baseman and captain Bid McPhee, piloting the Reds for ailing manager Buck Ewing,7 picked rookie Bill Dammann to start. A slightly built 5-foot-7 left-hander, Dammann had arrived with rave reviews after two years with Indianapolis of the Western League.8 Wins in his first two major-league starts, including a shutout of hard-hitting Cleveland on April 28,9 seemed to substantiate the praise. “Put me in tomorrow,” Dammann urged McPhee on Friday night. “I think I can throw this gang down.”10

A crowd of 6,400, more than twice the previous day’s turnout, showed at Exposition Park, the Pirates’ home since 1891. After Hawley retired the Reds in the top of the first, Dammann took the mound, armed with a submarine delivery and a finesse repertoire.11 The Pirates countered with “scientific ball” — the 1890s term for an offense focused on bunts and other strategically placed hitting. 12

Elmer Smith led off with a walk. Ely bunted to third baseman Charlie Irwin, whose throw to second pulled McPhee off the bag for an error. Lyons followed with another bunt. Dammann reacted slowly, forcing first baseman Farmer Vaughn to make the play; Lyons beat him to first and the bases were loaded with none out. Dammann turned Jim Donnelly’s grounder into a force at home, but Ely scored on Steve Brodie’s groundout to Irwin. The Pirates had a 1-0 lead without the ball leaving the infield.

Ely’s power broke open the game in the second. With one out, Bill Merritt and Hawley singled to right. Smith drew another walk, loading the bases for Ely. Locked on Dammann’s curve, he connected solidly with the third pitch he saw and drove the ball to deep left-center.

Dummy Hoy patrolled center field for the Reds. Rendered deaf and mute as a child by meningitis, in 1897 William “Dummy” Hoy was in the 10th season of a major-league career that spanned 14 years and nearly 1,800 games. He turned and pursued Ely’s drive, attempting a leaping catch as the ball passed by. No major-league outfielder caught more fly balls in 1897 than Hoy. But this one fell to the outfield grass, just out of his reach.

All three Pirates held their bases, waiting to see whether Hoy would make the catch. When the ball hit the ground, Merritt scored easily from third. Ely sprinted close behind Smith. Both closed the gap on Hawley, who ran with his cap in hand, his face red from exertion.

Hawley touched home for the second run on Ely’s hit. McPhee, whose tenure in Cincinnati dated to the 1882 American Association Red Stockings, caught Hoy’s throw in short center as Smith and Ely rounded third. He turned and relayed the ball home. It reached catcher Pop Schriver just after Smith ran across the plate and as Ely slid home, completing the bases-loaded home run.

The crowd celebrated. “Then men got on their feet, actually screaming,” the Pittsburg Post observed. “They swung their hats, danced, sang and did everything that a man of reason is not expected to do. It was a glorious opportunity to cut loose and cut loose the people did.”13 The Pirates led 5-0.

Meanwhile, Hawley continued his mastery of the Reds by holding Cincinnati scoreless through six innings. Schriver tripled to lead off the fifth, but Hawley retired the next three batters to keep the Reds off the scoreboard. Hawley “had all his old-time speed and curves to burn, and as a consequence the Reds could not connect with his delivery to any alarming extent,” the Pittsburg Leader reported.14

The Pirates extended their advantage in the fifth and sixth innings. Brodie, Pittsburgh’s main return in a November 1896 trade that sent Jake Stenzel to Baltimore, started the fifth with a double to the right-field fence and moved to third on Donovan’s bunt single. Dick Padden’s single drove in Brodie. In the sixth, Smith singled, stole second, and advanced home on fly outs by Ely and Lyons to run the score to 7-0.

Cincinnati finally broke through in the seventh, when Eddie Burke’s two-out single scored rookie shortstop Claude Ritchey,15 but Pittsburgh responded promptly in its half of the seventh. With two outs, Padden reached on McPhee’s error and Merritt singled. Hawley, an outstanding hitter throughout his career, ripped a triple to the right-field corner, scoring Padden and Merritt for a 9-1 Pirates advantage.

Hawley sealed the win by closing out the Reds in the eighth and ninth, aided by Smith’s running, leaping, and crowd-thrilling catch of McPhee’s line drive. “What’s the matter with Hawley?” a fan shouted after each inning. “He’s all right!” many other fans responded. Shouts of “Who’s all right? Hawley’s all right!” followed.16

The sweep boosted Pittsburgh’s spirits. “The Pittsburg team played first-class ball last week, in fact, the play was of a championship kind,” the Pittsburg Post summarized. “If Donovan’s men continue to put up the game they did last week they will most certainly land in first place.”17

But the 1897 Pirates’ performance did not match that optimism. They lost nine games in a row on a June road trip and never regained their early drive, finishing with their first losing record since 1891. Hawley’s 4.80 ERA was his highest in three seasons in Pittsburgh. In November, the Pirates traded him to Cincinnati in a seven-player deal. Ely remained Pittsburgh’s shortstop until Honus Wagner replaced him in 1901.

I wrote about this game after reading a 1940 Pittsburgh Post-Gazette article in which a longtime fan, Mr. Basil Peel, recounted his favorite baseball memories.18 This was the first major-league game that Mr. Peel ever attended. At age 12, he walked approximately four miles from Pittsburgh’s South Side for the game. “What a thrill that was,” Mr. Peel reminisced, remembering the day at Exposition Park.

3 “Donovan’s Men Take the First: Outplay the Cincinnati Red Stockings in a Close Game at Exposition Park,” Pittsburg Post, May 7, 1897: 6.

4 Donovan, the Pirates’ regular right fielder since 1892, assumed managerial duties when Connie Mack resigned at the end of the 1896 season to become manager of the Western League’s Milwaukee Brewers. Norman Macht, Connie Mack and the Early Years of Baseball (Lincoln: University of Nebraska Press, 2007), 128-130.

5 “Pittsburgs Hit the Ball: They Win an Exciting Game After It Looked Safe for the Cincinnati Reds,” Pittsburg Post, May 8, 1897: 6.

6 “Donovan’s Men in Good Form: They Lead Their Opponents This Season in Every Department of the Game,” Pittsburg Post, May 10, 1897: 6.

7 Sidelined by an unspecified illness, the Cincinnati player-manager and 1939 Baseball Hall of Fame inductee did not accompany the Reds on their first road trip of 1897. “Enormous Crowd Greets Anson,” Cincinnati Enquirer, May 10, 1897: 2.

8 Charles Comiskey, whose St. Paul team had faced Dammann in the Western League, lauded him before the season: “Dammann pitched great ball in the Western League last season, and I believe he will prove one of the best left-handers in the league.” “All Sports,” Cincinnati Enquirer, April 11, 1897: 23.

10 “Daring Work by Eddie Burke and ‘Dusty’ Miller’s Terrific Home Run Went for Naught Because of a Measly Muff: Reds Beaten Again in a Hard-Slugging Contest,” Cincinnati Enquirer, May 8, 1897: 2.

11 The Pittsburg Press reported that Dammann “prides himself on being able to toss up a clever imitation of [veteran Cincinnati pitcher] Billy Rhines’ underhand delivery.” “A Timely Homer: Fred Ely Made It When All the Bases Were Occupied,” The Pittsburg Press, May 9, 1897: 6. The Cincinnati Enquirer described Dammann’s array of “funny balls,” including “snake twists,” “barrel-hoop curves,” and “zig-zag shoots.” “Grand Was Dammann’s Work: Pitched the First Shut-Out of the Season.”

12 “Those who were fortunate enough to witness Saturday’s contest had an opportunity of witnessing scientific baseball,” the Pittsburgh Commercial Gazette reported. “To start off with, the players, or rather the majority of them, found little Dammann had a puzzling delivery and instead of trying to knock the ball out of the lot they took to bunting, and in that way secured bases.” “Leading the League: Figures Show the Pirates are Playing the Best Ball,” Pittsburgh Commercial Gazette, May 10, 1897: 6.

15 Ritchey came to Cincinnati from Brooklyn in the spring of 1897 in place of Tommy Corcoran, who had refused to report to the Reds after a trade from the Bridegrooms. He later started at second base for the Pirates’ 1901 to 1903 National League pennant winners.

16 “Our Boys Devoured by Pirates: Three Straight the Story at Pittsburgh, and Lots of Billy Dammann’s Confidence Is Gone,” Cincinnati Enquirer, May 8, 1897: 8.