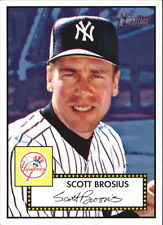 Arizona manager Bob Brenly handled the questions about his decisions in Game Four – from starting Curt Schilling on three days’ rest and then removing him after the seventh in favor of Byung-Hyun Kim. Brenly explained his decisions but also commented on second-guessing. “If you cannot point something out ahead of time, it becomes the lowest form of journalism as far as I’m concerned to come in after the fact and say what should have happened.”1

He also expressed confidence in Kim, his closer, who had allowed two home runs in blowing the previous night’s game to the New York Yankees. “He’s available to pitch tonight,” Brenly said before Game Five of the 2001 World Series, “obviously in a much more limited role – maybe an inning or maybe a hitter, but he is available.”2 Kim, in giving up a game-tying two-run homer to Tino Martinez with two out in the last of the ninth and a game-ending home run to Derek Jeter with two out in the last of the tenth, made 62 pitches in his 2? innings of work.

As for his closer, Yankees manager Joe Torre said he would want to limit Mariano Rivera to one inning in that night’s game. “His pitch count has been pretty good, even though he’s pitched three innings in the last two games. But again, I think I’d like to just hopefully be in a position to just use him one inning.”3

Torre was also hoping to get a stronger performance from Mike Mussina, who had lasted only three innings in starting the first game of the World Series. Torre and Mussina both agreed that Mussina’s command was the problem in that game, a 9-1 Arizona win. “He threw all of the stuff, but he was not able to put the ball where he wanted to. He was missing his spots.”4

“There’s not much I’d like to remember,” Mussina said of his Game One performance, “so I’ll just forget about it.”5

Even a stronger performance by Mussina in the opener might not have been enough as he was up against Arizona’s Curt Schilling, who was having a dominating postseason. For Game Five, the Yankees hitters would have one of their two chances in the Series to face a starter other than Schilling or Randy Johnson. Brenly rested his hopes on Miguel Batista, who was 11-8 with a 3.36 earned-run average during the regular season, a respectable record but not in the class of the Arizona Big Two.

However, the Yankees were as helpless against Batista as they as they had been recently against Schilling, Johnson, Brian Anderson, or anyone not named Byung-Hyun Kim. Batista, a 30-year-old right-hander who had floated among five different major-league teams (and even more minor-league teams) over the past decade before finding a home as a semi-regular in the Arizona rotation, held the Yankees to five hits and no runs over 7? innings.

Mussina also pitched a strong game. He allowed only a walk and a single in the first four innings, striking out six along the way. He got ahead of Steve Finley to start the fifth, but Finley then deposited a 1-and-2 pitch into the right-field seats to give Arizona a 1-0 lead. Two batters later, catcher Rod Barajas – a late replacement for Damian Miller, who was scratched because of a strained calf muscle – went deep to left with a home run that made the score 2-0. It was all the damage the Diamondbacks could do to Mussina, but it looked as if it would be enough.

Batista survived the first inning, when he allowed two runners, as well as allowing the leadoff batter to reach base in each of the innings from the third through the sixth. Batista walked a pair of batters with two out in the seventh but retired Scott Brosius on a fly to right to end the inning.

With two out in the eighth, Batista issued his fifth walk of the game and then gave up a bloop single to Bernie Williams. This brought Tino Martinez to the plate, and Brenly went to the bullpen, bringing in lefthander Greg Swindell, who got Martinez to fly to left.

The Yankee Stadium crowd was again subdued as it appeared their team would have to go back to Arizona and win a pair of games against Johnson and Schilling. They did cheer as the top of the ninth ended, in tribute to Paul O’Neill, who was trotting off the field in Yankee Stadium for possibly the last night. Sure that O’Neill would be retiring at the end of the Series (a decision O’Neill confirmed after the game), the New York fans saluted the right fielder for his many contributions to the Yankees over the past nine seasons.

A few moments later, the crowd let out another roar, this in response to the appearance of Byung-Hyun Kim, being called on by Brenly for the second straight night to try to close out the Yankees.

Jorge Posada greeted Kim with the same enthusiasm as the fans, driving a double to left. However, Kim retired Shane Spencer and Chuck Knoblauch, leaving himself only an out away from a save. Brosius looked at the first pitch for a ball, then turned on the next one and drilled it to left. There was no doubt in Brosius’s mind about the final destination of the ball. He began leaping in jubilation as he started down the line, watching the ball finally settle into the left-field seats.

For the second night in a row, the Yankees had shocked Kim and the Diamondbacks with a game-tying two-run homer with two out in the last of the ninth. From the dugout, Brenly stared in disbelief before coming out to the mound to replace Kim with Mike Morgan.

Morgan finished out the inning and retired the Yankees in order in the 10th and 11th. Meanwhile, Joe Torre went back to his bullpen ace, bringing in Rivera to start the 10th and staying with him in the 11th. Rivera gave up singles to Danny Bautista and Erubiel Durazo to start the 11th. The runners advanced on a sacrifice by Matt Williams. Steve Finley – with a homer and two singles in the game – was intentionally walked to bring up Reggie Sanders. On an 0-and-2 pitch, Sanders hit a soft liner up the middle. Second baseman Alfonso Soriano moved to his right and caught the ball with a diving backhanded grab. Mark Grace then grounded to Brosius, who ran to third and stepped on the bag for an inning-ending force.

Both teams went to new pitchers in the 12th. For the Yankees, Sterling Hitchcock quickly retired the Diamondbacks, then strolled to the dugout as organist Eddie Layton serenaded him with “Funeral March of a Marionette,” the theme to the Alfred Hitchcock television show.

For Arizona, Albie Lopez started the last of the 12th and gave up a single to Chuck Knoblauch on his first pitch. Brosius laid down a sacrifice bunt, sending Knoblauch to second. Soriano stepped in and lined a 2-and-1 pitch to right for a single. As Knoblauch rounded third, Reggie Sanders fielded the ball on two hops and fired a strong one-hop throw to the plate. A close play seemed imminent, but Barajas was unable to handle the bounce. The ball skipped off his glove as Knoblauch slid in with the winning run.

The victory put the Yankees ahead in the Series as the teams prepared to go back to Arizona for the final game or games.

For the second night in a row, Joe Torre in his postgame interview session expressed amazement at the ninth-inning comeback while his Arizona counterpart, Bob Brenly, prepared himself for another round of the “lowest form of journalism.”