The last game of the 1950 season found the Philadelphia Phillies clinging to a one-game lead over the Brooklyn Dodgers, who were closing fast. If the Phillies lost, a three-game playoff for the pennant would be needed and that did not bode well for the Whiz Kids, whose starting pitching was razor-thin due to injuries to Bubba Church and Bob Miller and the loss of Curt Simmons to active military duty.

The Phillies had enjoyed a 7½-game lead on September 20,1 only 11 days before the finale, which was to be played on October 1 against the Dodgers in Brooklyn’s Ebbets Field. Since then the Phillies had dropped eight of 10 games, including the last five in a row, to see their lead almost vanish.

It was anyone’s guess whom Phillies manager Eddie Sawyer would name to start on the mound for the climactic game on Sunday afternoon. Robin Roberts had started three games in the previous seven days, including Wednesday and Thursday starts against the New York Giants. With Simmons gone, the other Phillies starters had been largely ineffective during the late-season slump. Sawyer didn’t announce anything to the press, but about an hour before the game walked over to Roberts at his locker, tapped him on the shoulder, handed him a brand-new baseball, and wished him luck.2

Starting for the Dodgers was their ace, Don Newcombe, who had pitched almost as much as Roberts down the stretch. The fact that both hurlers were going for their 20th victory of the season went almost unnoticed, given the magnitude of the game.3 Roberts later recalled being nervous and tense and not very sharp while warming up before he happened to look over at Newcombe. He realized that Newk was just as tired and anxious as he was and after looking over never gave another thought to how tired he was supposed to be.4

A standing-room crowd of 35,073 packed Ebbets Field, with at least another 30,000 unable to squeeze into the park. Newcombe began strongly, retiring the Phillies in order in the first. In the bottom of the inning, Roberts started uncharacteristically by walking leadoff hitter Cal Abrams and giving up a long drive to Dodgers shortstop Pee Wee Reese that Richie Ashburn in center was able to run down, then retired the side on two routine outs. Neither side mounted much of a threat until Reese led off the Dodgers’ fourth with a double for Brooklyn’s first hit. Roberts then retired the next three batters on a failed sacrifice, a comebacker to the mound, and a fly ball to center.

Through five innings the Phillies had four runners on base on three singles and a walk, but were unable to advance anyone past first base. The Phillies did break through for a two-out run in the top of the sixth, however. After Newcombe retired the first two batters on tough groundouts,5 Dick Sisler stroked a hit just out of the reach of Gil Hodges at first. Del Ennis followed with a Texas Leaguer to center that Duke Snider, playing deep because of Ennis’s home-run power, could not reach. Sisler, running all the way with two outs, pulled into third on the play. Third sacker Willie “Puddinhead” Jones then delivered a clutch single to Reese’s left to bring in Sisler with the first run of the game. Granny Hamner then belted a long drive to the scoreboard in right, but Carl Furillo was able to track it down and keep the score at 1-0.

Roberts retired the first two Dodgers in the bottom of the sixth on groundouts to second baseman Mike Goliat, bringing Reese to the plate. He continued to be a thorn in the Phillies’ side, lofting a fly ball down the right-field line, a mere 297 feet from the plate. The ball hit the screen above the wall and normally would have been a double at best. But in this case the ball dropped straight down to a six-inch coping on the top of the wall and stuck. The ball was in the field of play but was unreachable as Reese streaked around the bases to tie the score, 1-1. The ball stayed on the ledge, a reminder of why the score was now tied.6

Although the Phillies managed a baserunner in the seventh, eighth, and ninth innings against Newcombe, they couldn’t get a runner past first.7 Meanwhile Roberts retired the Dodgers in order in the seventh and gave up a leadoff single to Roy Campanella in the eighth but retired the side without damage.

Roberts had surrendered only three hits heading into the bottom of the ninth with the score still even at 1-1.8  Abrams led off and went to a 3-and-2 count. Roberts thought he then struck him out but umpire Larry Goetz called ball four on a very close pitch. Reese fouled two pitches off trying to lay down a sacrifice bunt, but then hit a rope to left field to put runners on first and second with no one out.

Eddie Sawyer had ace reliever Jim Konstanty warming up, but elected to leave Roberts in to face the dangerous Duke Snider.9 Roberts thought Snider, with no outs, would be bunting and so threw a first-pitch fastball.10 He was wrong. Snider ripped the pitch on a line past the mound, just to the first-base side of second base for a clean base hit. Abrams at second had to hesitate a moment to make sure Goliat couldn’t reach the ball before he took off for third. Ashburn in center was reputed to have a weak throwing arm and so Milt Stock, the Dodgers third-base coach, waved Abrams home, trying to score the winning run. Ashburn, however, caught the ball on the first hop and made the most famous throw in Phillies history, a strike to Stan Lopata, the Phillies catcher, to nail Abrams at the plate by a good 15 feet.11

The runners had moved up to second and third on the throw to the plate, so Roberts was still in a jam with only one out. He intentionally walked Jackie Robinson to load the bases and bring up Furillo, who sported a .305 average with 106 RBIs. Roberts’ first pitch was a high fastball to a high-fastball hitter, but it had something extra on it because Furillo popped it up to Eddie Waitkus at first in foul territory for the crucial second out.12 The equally dangerous Gil Hodges was up next, with 113 runs batted in for the year. With the count 1-and-1 Hodges lifted a fly ball to right fielder Del Ennis, who battled the afternoon sun all the way. He managed to catch the ball against his chest for the third out to send the game to extra innings.13

Roberts didn’t have much time to relax as he was the leadoff hitter in the top of the 10th and Sawyer elected to let him hit. He was looking to make contact and on the second pitch hit a bouncer by Newcombe up the middle for a base hit. After a failed bunt attempt, Waitkus looped a Texas Leaguer in front of Snider in center to put runners on first and second with no one out. Ashburn then did bunt but Newcombe made a great play and was able to just nip Roberts at third for the first out.

That brought to the plate Dick Sisler, son of Hall of Famer George Sisler. Dick had been battling a sore wrist for some time and was not 100 percent. But even so he was 3-for-4 so far Newcombe. He liked fastballs out over the plate but quickly got behind 0-and-2, foul-tipping the first pitch and fouling the second straight back. He took a ball high and outside and then fought off an inside fastball, fouling it back to the press box. Newcombe tried to pour another fastball inside, but instead got it high and out over the plate. Sisler was all over it, hitting a low-trajectory shot to the opposite field in left. Although no one knew at first if it was a home run, the ball carried over the wall into the third row for the most dramatic home run in Phillies history.14

All of a sudden the Phillies had a 4-1 lead heading into the bottom of the 10th. Roberts made quick work of the Dodgers, retiring Roy Campanella on a line drive to Jack Mayo in left, striking out pinch-hitter Jim “Rip” Russell on four pitches, and getting another pinch-hitter, Tommy Brown, on a foul pop to Waitkus at first. The Phillies immediately mobbed Roberts and carried him off the mound as they celebrated their first pennant in 35 years. 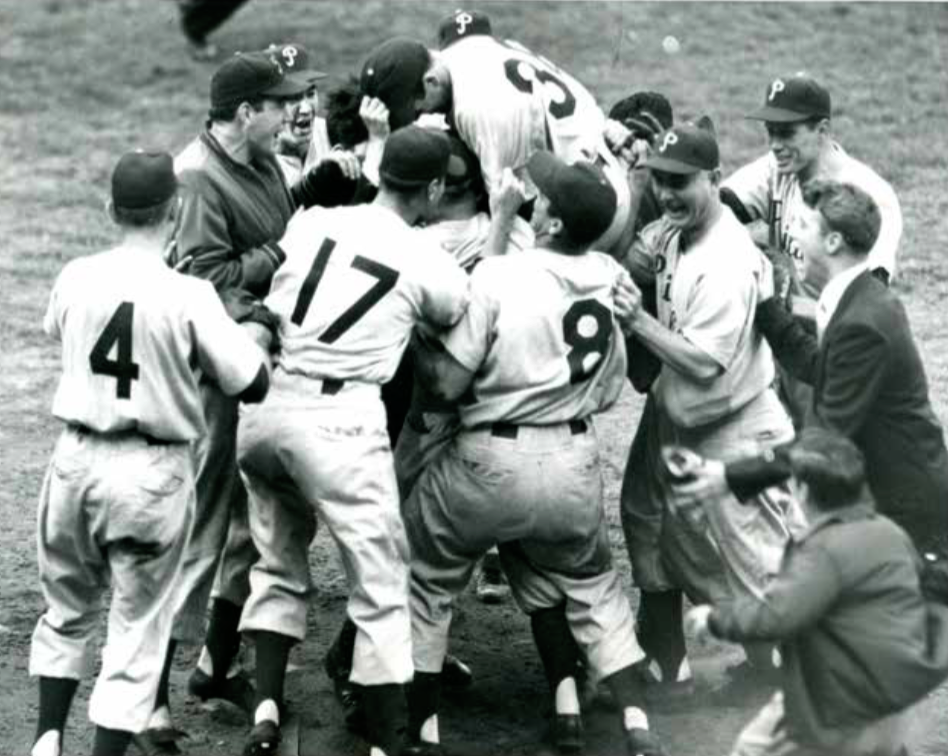 1 The Boston Braves were tied with the Dodgers on September 20 and also 7½ games back.

2 According to Roberts, it was the only time Sawyer, who didn’t talk much to his players, ever did anything like that. Robin Roberts and C. Paul Rogers III, The Whiz Kids and the 1950 Pennant (Philadelphia: Temple University Press, 1996), 10.

3 It would be Roberts’ sixth attempt at his 20th win.

6 Roberts and Rogers, 11. According to Ennis, the ball had backspin on it and just balanced on the ledge. He later said he should have thrown his glove at Reese’s drive because that would have been a triple rather than a home run. Roberts and Rogers, 314. In the seventh inning a young fan provided comic relief while holding up the game by walking along the top of the right-field fence and reaching up and plucking Reese’s home-run ball from the ledge. Baumgartner.

7 In the top of the ninth Abrams made a leaping catch against the left-field fence of a long drive by Hamner.  Baumgartner.

8 As he headed to the mound to start the inning, Roberts briefly thought about the Florida vacation he and his wife, Mary, had planned after the season with his World Series money and how, if he let the Dodgers score, they were likely not going to Florida. Roberts and Rogers, 11.

9 Konstanty would win the National League MVP Award and would set a National League record with 74 appearances. Snider batted .321 in 1950 with 31 home runs and 107 RBIs.

11 Lopata had been brought in to catch in the ninth inning after Seminick was removed for a pinch-runner in the eighth inning. He had Ashburn’s throw in time to tag Abrams, who didn’t bother to slide, several feet up the line.

13 Ennis later said that he lost the ball in the sun and that it hit him right in the chest and dropped into his glove. After the game he showed the seams of the ball imprinted in his chest. Roberts and Rogers, 318.

14 George Sisler, Dick’s father, was a scout for the Dodgers and watched the game from the stands. Afterward he said, “I felt awful and terrific at the same time.” ‘Felt Awful and Terrific at Same Time’ – Sisler, Sr., The Sporting News, October 11, 1950: 5.