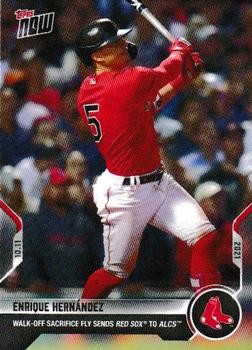 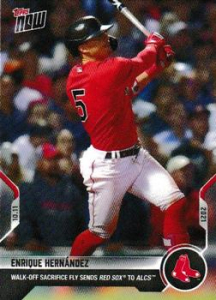 The evening after catcher Christian Vazquéz homered to give the Boston Red Sox a walk-off win over the Tampa Bay Rays in Game Three of the 2021 American League Division Series, the Red Sox won Game Four and wrapped up the ALDS in another walk-off.1

Vazquez was again instrumental – this time as a table-setter.

Thanks to the October 10 win, the Red Sox had beaten the 100-win Rays, AL East champions and defending pennant-winners, in two of the first three games in the best-of-five series. Boston had won eight fewer games – 92 – but was fresh off a wild-card win over the Yankees that arguably represented a payback for their single-game loss to New York for the division title in 1978, and this edition of the Red Sox advanced to the next round of the 2021 playoffs.

For Game Four, Boston manager Alex Cora started 28-year-old left-hander Eduardo Rodriguez. He had missed all of the pandemic-shortened 2020 season with a serious case of COVID-19 that involved myocarditis. He was 13-8 during 2021 with a 4.74 earned-run average. Tampa Bay manager Kevin Cash tapped 34-year-old righty Collin McHugh, 6-1 with a 1.55 ERA during the regular season but was battered for two homers and three runs in 1⅔ innings and charged with the loss in relief in Boston’s 14-6 win in Game Two.

Neither team scored in the first two innings. Only one batter reached base, Boston third baseman Rafael Devers, who singled in the first. Rodriguez retired the first nine Rays he faced.

Cash had not wanted to ask too many innings of McHugh. Although McHugh had thrown only 18 pitches in two innings, the Rays skipper brought on rookie Shane McClanahan, who had pitched five scoreless innings and was credited with the win in Tampa Bay’s 5-0 victory in Game One, four days earlier. McClanahan had started 25 games in 2021 and was 10-6 (3.43 ERA), but had never worked in relief as a professional other than one 2019 game in the minors.

The Red Sox soon exploded for five runs against McClanahan. Vazquéz kicked things off with a single over second base and into center field. After second baseman Christian Arroyo flied out to deep right, first baseman Kyle Schwarber walked on four pitches. Kiké Hernández flied out routinely to left field for the second out.

Devers – who had led Boston with 38 homers and 113 RBIs in the regular season – hit a high-arching three-run homer that came down in the first row of the center-field bleachers, giving Boston a 3-0 lead.

Shortstop Xander Bogaerts followed with a single between third and short and into left. Left fielder Alex Verdugo doubled high off the left-field wall, driving in Bogaerts. On a 3-and-2 count, J.D. Martinez singled, also high off the wall, scoring Verdugo with Boston’s fifth run.

Cash made a move and brought in another reliever, JT Chargois. Right fielder Hunter Renfroe doubled to center, Martinez holding at third base. The Red Sox had batted around and Vazquéz came up again. Chargois struck him out on three pitches. It was indeed 5-0, Red Sox.

But the Rays, whose 857 runs in 2021 were second-most in the AL, had already overcome a larger deficit against the Red Sox that season. On September 6, they came back from a 7-1 deficit to beat Boston 11-10 in 10 innings.

Tampa Bay got its first baserunner when right fielder Randy Arozarena singled to start the fourth, but Rodriguez disposed of the next three batters, the ball never really leaving the infield.

Andrew Kittredge pitched the fourth and fifth innings for Tampa Bay, facing six Red Sox batters and retiring them all.

The Rays began to chip away at the lead in the fifth. First baseman Jordan Luplow doubled off third baseman Devers’ glove and into the left-field corner. He tagged and took third, just barely, on a deep fly to center by third baseman Yandy Diaz, then scored as Austin Meadows, who had led the Rays with 106 runs batted in, grounded out to first base unassisted, Schwarber guarding the line. Another groundout to first ended the inning, but Boston’s lead was down to 5-1.

Tampa Bay continued its charge in the sixth. Rays center fielder Kevin Kiermaier dropped a ball into left that got by Verdugo, scored a double. Cora brought in Tanner Houck to relieve Rodriguez. Kiermaier took third on Arozarena’s fly out to center. Rookie shortstop Wander Franco – headed for a third-place AL Rookie of the Year finish at age 20, even though the Rays did not promote him to the majors until June – homered into the first row of the center-field bleachers, and it was 5-3, Boston’s lead cut to two.

The score was tied and Renfro’s futile throw to the plate allowed Arozarena to take second base. Garrett Whitlock replaced Brasier with a runner on second base – the potential go-ahead run – and still nobody out. Whitlock – claimed from the Yankees in the December 2020 Rule 5 draft – got outs from the next three batters.2 First was Franco on a fly ball to medium right field. Renfroe’s throw to third base skipped by both Bogaerts and Devers, but Whitlock was himself into proper position to back up the throw, right in front of the Rays dugout. Arozarena was unable to take advantage and advance.

Brandon Lowe had led the Rays with 39 homers in the regular season but was 0-for-17 in the ALDS and had struck out three times in this Game Four. He hit a two-hop chop to Whitlock who threw easily to first for the second out. Slugging veteran Nelson Cruz bounced the ball to third, scooped by Devers, with the throw just beating Cruz to first base. As Marc Topkin put it in the Tampa Bay Times, “Though the Rays got back to even, they could never get ahead.”3

The Red Sox got Verdugo to second base, thanks to Franco’s throwing error in the bottom of the eighth. Now it was Boston with a runner on second and nobody out. J.D. Martinez flied out to right and Renfroe flied to center, with Kiermaier’s throw to third base just barely getting Verdugo for an inning-ending double play.

Whitlock retired the three Rays he faced in the ninth, in order and without drama.

Heading to the bottom of the ninth with the game tied, J.P. Feyereisen took over pitching for Tampa Bay.

Vazquéz started the inning by singling just under Diaz’s glove as he dove to his left. Arroyo executed a bunt in front of the plate, sacrificing Vazquéz to second.

Travis Shaw (0-for-1 in the postseason) pinch-hit and skittered a ball to third base, which Diaz adeptly fielded, but his throw hopped and bounced off first baseman Ji-Man Choi’s chest while Shaw pulled into the bag safely. Only Choi’s smothering of the ball kept Vazquéz from scoring.

With still just one out, Hernandez was up. He was batting .423 (10-for-23) in the 2021 postseason with nine base hits and five RBIs in the first three games of the Division Series. Shaw took second on defensive indifference.

Cash could have had the red-hot Hernandez walked, but Devers was in the on-deck circle. He took his chances with Hernandez, who hit a ball to fairly deep left-center field, easily deep enough for pinch-runner Danny Santana to tag and score the game-winning run ahead of Meadows’ throw home.4

“The victory proved as unsteady as most of the season that has preceded it,” wrote Alex Speier in the Boston Globe, “with the Red Sox forging an early 5-0 lead but then springing a steady leak that yielded a 5-5 tie in the eighth. But after five listless innings, the team found a final burst across the finish line.”5

With the 6-5 victory, a walk-off on consecutive days, the Red Sox had won the Division Series. They had batted .341 as a team in the series while their pitchers had held the Rays to .211. Red Sox pitchers had struck out 46 Rays, but Rays pitchers had struck out only 26 Red Sox. Boston had finished in last place the year before. Now they were headed to the next round of the playoffs.

“I feel like nobody expected us to be here right now,” starter Eduardo Rodriguez said. “And look where we are.”6 It was, of course, the team’s “first set of consecutive walk-off postseason wins since 2004 ALCS Games 4 and 5, both courtesy of David Ortiz against the Yankees.”7

The Red Sox faced the Houston Astros in the ALCS. Despite winning two of the first three games, they dropped Games Four and Five – both at Fenway Park. The Astros moved on to the World Series, won by the Atlanta Braves in six games.

The game itself can be seen on YouTube at:

4 In Game Three, Hernandez had a fifth-inning home run, his seventh hit in seven consecutive plate appearances, tying the major-league record. Gary Phillips, “A Tough (Correct) Call and a Walk-Off Homer Have the Rays on the Brink,” New York Times, October 10, 2021. https://www.nytimes.com/2021/10/10/sports/baseball/red-sox-rays.html