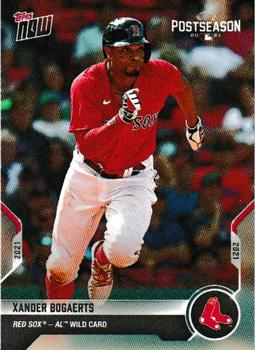 The 2021 season was a weird one for the Boston Red Sox. Most prognosticators picked them for middle of the pack, maybe a middling third place in the AL East behind the Tampa Bay Rays and New York Yankees. To open the season, they were swept – at Fenway Park – by the Baltimore Orioles, who finished in last place in the division with 110 losses, a stunning 48 games out of first. And when the season came down to the final nine games, with the Red Sox and Yankees battling for second place and a possible wild-card slot, the Yankees took three in a row from Boston – in Boston – and the Orioles took two of three from the Red Sox at Camden Yards.

Only when the Red Sox swept the Washington Nationals in the season’s final three games, and the Yankees dropped two of three to the Rays, did the 162-game schedule see the Red Sox and Yankees tied for second place, both 92-70.1

The stage was set for another head-to-head Yankees-Red Sox confrontation – a single-game winner-takes-all wild-card game. In the 19 games the two teams had played head-to-head, the Red Sox had won 10 to the Yankees’ nine. Hence the wild-card game was scheduled for Boston’s home park.

For some, this brought back memories of a Game 163 back in 1978, the winner determining which team held the AL East title that year.2 Both the Yankees and Red Sox had finished with identical 99-63 records. A single-game playoff was required to see which team could win number 100 and advance to the ALCS, and which team’s season would be over.

That game was played on October 2, 1978.3 The Red Sox held a 2-0 lead after six innings, but starter Mike Torrez gave up a pair of one-out singles, and then a lead-changing three-run homer to shortstop Bucky Dent, who had hit only four home runs all season long. There was a palpable feeling of deflation. The game wasn’t quite over yet – in fact, it ended 5-4, as Boston scored twice more after the Yankees staked out a three-run advantage – but most snake-bitten Red Sox fans felt it was destiny to lose to the Yankees, as they so often had in the memories of many.4

There came other years the two teams had battled it out – even playing each other in the ALCS both in 2003 and 2004 and in the ALDS in 2018. That the Red Sox rallied after being down three games to none and sweeping the final four games in 2004, and then gone on to win their first World Series since 1918, was celebrated, as was their triumph over the Yankees in the 2018 ALDS.

But, particularly for those who had been there, or watched on television, the sting of 1978 had never quite gone away.

The 2021 game was set for Tuesday evening, October 5. The winner would play Tampa Bay in the Division Series.

Each team had one two-out base hit in the first inning. Yankees DH Giancarlo Stanton singled to left-center but was left stranded. Red Sox shortstop Xander Bogaerts followed a two-out walk to third baseman Rafael Devers with a home run into the straightaway center-field bleachers. The Red Sox led, 2-0.

Third baseman Gio Urshela singled in the Yankees second but advanced no farther. Kevin Plawecki doubled to right-center for the Red Sox, but Cole struck out all three of the other batters he faced.

Eovaldi retired the side in order in the top of the third.

Boston’s regular DH, J.D. Martinez, was out with a sprained ankle. His replacement, Kyle Schwarber, a trade-deadline pickup from the Nationals, led off the Boston third with a home run deep to right field, well over the visitors’ bullpen and into the gap between the bleachers and grandstand. It was the seventh home run Cole had allowed at Fenway Park in 2021, in just over 18 innings of work. After the next two batters reached, Cole was removed from the game, his place taken by reliever Clay Holmes. The outing was the shortest of Cole’s career.7

Neither side scored in the fourth or fifth, as pitchers for both teams faced the minimum three batters in each inning. Only one man reached base. Working the fourth for New York was Holmes, and Luis Severino took over in the fifth. Red Sox right fielder Hunter Renfroe singled to lead off the fifth but was erased on a double play.

Stanton singled high off the wall in left-center. Judge rounded third, waved home by third-base coach Phil Nevin, despite there being just one out and the middle of New York’s order due. Kiké Hernandez’s one-hop throw to Bogaerts and a relay to Plawecki at the plate cut down Judge, keeping Boston’s lead at two runs.9 Left fielder Joey Gallo popped up to Devers at third, ending the inning.10

The Red Sox restored their three-run lead in the bottom of the inning on a one-out walk to Bogaerts, followed by a double into the right-field corner by left fielder Alex Verdugo that scored Bogaerts. Severino was pulled; Jonathan Loaisiga became the Yankees’ fourth pitcher. He struck out the next two Red Sox.

Tanner Houck took over for Brasier and retired the Yankees in order in the top of the seventh. Christian Vazquez had replaced Plawecki as catcher.

After one out, Loaisiga walked both Schwarber and Hernandez. Boone called in Chad Green to relieve. After getting Devers to line out to center, he walked Bogaerts, loading the bases, Verdugo then lined a ball to right-center, driving in both Schwarber and Hernandez. Even though Verdugo was thrown out at second base to end the inning, the Red Sox now led 6-1, and there were only six outs to get.

Hansel Robles got three of them, setting down three Yankees in order in the top of the eighth. Green retired the three Boston batters in the bottom of the eighth.

Garrett Whitlock – picked up by the Red Sox, from the Yankees, in the Rule 5 draft on December 10, 2020 – was tasked with getting the final three outs. Judge grounded out, short to first. Stanton hit a solo home run to right field, inside the Pesky Pole like Rizzo’s. It was 6-2, Boston still up by four runs. Both Gallo and second baseman Gleyber Torres hit deep fly balls, to right and right-center respectively, but neither was deep enough. Both were caught, and the game was over. The Red Sox had won.

Verdugo had three RBIs. Eovaldi had a win.11 Bogaerts had kicked things off with his two-run homer back in the first inning, and his sixth-inning throw that cut down Judge at home plate was arguably the key defensive play of the game.

The New York Post’s post-mortem began: “The ace stunk, the offense no-showed and the decision-making was nearly as bad.”12 Gerrit Cole said that after the game, he felt “sick to my stomach.”13

Sports Illustrated acknowledged that the Yankees had been far from their best but suggested that the Red Sox deserved credit on the positive side.14

After the game, manager Cora said, “I thought [Game] 162 the other day was the most uncomfortable game to manage in my career. This tops it. This was something different.”15

The New York Times noted, “Tuesday was the fifth time these storied rivals had played in an elimination game in the playoffs and the Red Sox have now won the past three.”16 The paper added, “[The] Yankees led the major leagues in walks during the regular season. But on Tuesday, they drew none. Instead, they struck out 11 times.”

The win left some veteran Red Sox fans feeling that a successful exorcism had been performed, some 43 years after the “Bucky Dent” game. Many felt the season was thus a success and that it hardly mattered that Tampa Bay was likely to dispose of the Red Sox quickly in the Division Series.

That didn’t happen. Despite finishing eight games behind the Rays in the regular season and the Rays winning 11 of the 19 games against the Red Sox, Boston beat Tampa Bay three games to one in the ALDS, celebrating the series win at Fenway.17

In addition to the sources cited in the Notes, the author consulted Baseball-Reference.com, Retrosheet.org, and YouTube.

1 The Red Sox had played better than expected throughout the season, and were unexpectedly in first place for most of April, May, and July, before dropping to second place and then third. Tampa Bay won the division, finishing 100-62, a full eight games ahead of both New York and Boston.

2 Among those present for both games, in 1978 and 2021, were Yankees broadcaster Suzyn Waldman and the author of this article.

4 Some may have recalled 1949, when the Yankees had won the pennant in the final two games of that year. All were familiar with the number of pennants and world championships the Yankees had won since Boston had last won it all a full 60 years earlier, back in 1918.

5 That included a win over the Yankees in Game Three of the 2018 ALDS.

8 Formally dubbed Pesky’s Pole by the Red Sox in 2006, the right-field foul pole is more often called the Pesky Pole. The Red Sox named it for the popular infielder and Red Sox lifer Johnny Pesky, a good hitter but not a slugger, who hit the pole just once.

9 The Boston Herald reckoned the ball was about five feet short of a home run, caroming off the wall. Had Nevin held Judge, New York would have had runners on second and third with just one out. Steve Hewitt, “Red Sox Advance to ALDS with Dominant Wild Card Victory over Yankees,” Boston Herald, October 5, 2021. https://www.bostonherald.com/2021/10/05/red-sox-advance-to-alds-with-dominant-wild-card-victory-over-yankees/, Accessed October 28, 2021.

10 The Sox led the majors with 43 outfield assists during the 2021 regular season.

11 He had struck out eight and not walked a batter.

14 “Boston overcame its two greatest weaknesses—its lack of bullpen depth and dreadful infield defense – simply by hardly involving them at all. Starting pitcher Nathan Eovaldi attacked the Yankees’ typically patient hitters in the strike zone early in the count, throwing 80% of his first pitches for strikes, and then put them away with a combination of four-seamers, splitters, sliders and curves. He didn’t walk anyone (nor did the rest of the Red Sox pitchers), and only two of the 20 batters he faced worked three-ball counts.” Matt Martell, “Give the Red Sox Some Credit for AL Wild-Card Win,” Sports Illustrated, October 8, 2021. https://www.si.com/mlb/2021/10/06/red-sox-yankees-al-wild-card-cardinals-dodgers. Accessed October 28, 2021.

17 The ALCS started nicely for the Red Sox, too. They lost a well-contested Game One, 5-4, then banged out three grand slams in two games and trounced the Houston Astros 9-5 and then 12-3. Suddenly, Boston’s bats went cold, colder, and even colder: They collected only 10 base hits in Games Four, Five, and Six – five, then three, then only two. They had 32 hits in the first three games and 10 total over the next three. It was the Astros who went on to the World Series. For many Red Sox fans, though, the fact that the Yankees had gone home in the single-game wild card was satisfying enough to call it a very good season.