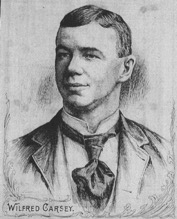 In 1890 professional baseball was illegal on Sundays in many parts of the country. But in California, Sunday baseball was celebrated. The Oakland Colonels and San Francisco Metropolitans played two games on Sunday, October 12, 1890. The first began at 10:30 A.M. in Oakland and was won by the Mets, 4-2. The second game started at 2:30 P.M. at the Haight Street Grounds in San Francisco.1 Between 3,600 and 5,000 fans saw the first contest, the most ever at the Oakland venue. For the second game, between 14,000 and 15,000 attendees filled the much larger San Francisco ballpark. It was a good-natured crowd, said the San Francisco Call: “The jovial Frisco rooter and the rabid Oakland crank were there in all their glory, the former being armed with his noisy fish-horn and the Oaklander with the more subdued and musical mouth-calliope. Each faction wore the badge of their respective team, on which was inscribed befitting mottoes.”2

The teams entered the day tied for first place in the four-team California League. The Metropolitans were managed by Mike Finn. The Colonels were named for their owner and manager, Colonel Thomas P. Robinson. Marching majestically in a cape overcoat and derby, Robinson, like a drum major, led a brass band into the ballpark before each game of the twin bill.

In the second game, Finn chose Jacob “Nick” Lookabaugh to pitch for the Metropolitans. Robinson tabbed a 19-year-old phenom, Wilfred “Kid” Carsey, to pitch for the Colonels.3 Both hurlers were right-handers.

The Mets batted first and went out in order. Oakland’s Joe Cantillon singled to lead off the bottom of the first; left fielder Rube Levy bobbled the ball and threw wildly to second base, allowing Cantillon to reach third. Two outs later, Sam Dungan, the league’s leading hitter, slapped a double into left-center field, scoring Cantillon with the first run of the game.

The Mets threatened in the top of the second. William “Steve” Stevens led off by drawing a walk and went to second base when Charley O’Neill could not hold Buck Ebright’s stinging line drive to left field. O’Neill was charged with an error. But Carsey retired the next three batters to get out of the jam.

Charley O’Neill singled to right field to start the bottom of the second. Jim McDonald also singled to right. After Norris O’Neill struck out, first baseman William “Peek-a-Boo” Veach was slow to field Carsey’s grounder, and Carsey reached to load the bases. Cantillon’s grounder was handled by shortstop Bill Everitt, who threw to second baseman Joe Shea for a force out, as Charley O’Neill came home with the Colonels’ second run. McDonald tried to score from second on the play but was nailed at the plate by Shea’s alert throw to catcher Chick Speer.

Everitt, a 21-year-old shortstop, impressed with his fielding. The highlight of his performance, for which he received a standing ovation, occurred in the bottom of the third. Charles Dooley grounded a ball past Ebright, the third baseman. Ranging far to his right, Everitt corralled it and threw to first in time to retire Dooley.

But it was Carsey’s day to shine. In the fourth inning Charlie Sweeney, the sole umpire, mistakenly gave Ebright a base on balls on only three balls. Otherwise, Carsey did not allow a baserunner from the third inning through the eighth. In the fifth inning, he needed only five pitches to retire the side.

He received ample help from his fielders. In the seventh, Stevens slugged an apparent home run to left-center field. But Oakland’s center fielder, Danny Sweeney, the smallest player in the league at 5-feet-5,4 chased it down and after juggling it, made the catch. The next inning, third baseman Norris O’Neill grabbed Everitt’s grounder over the bag and fired across the diamond in time to get him.

Carsey gave up a base on balls with one out in the ninth, but the Mets could not capitalize. When all was said and done, Carsey had delivered a no-hitter. The final score was Oakland 2, San Francisco 0. With a split of the doubleheader, the teams remained tied for first place.

Carsey allowed three walks in his gem. Lookabaugh also pitched well, allowing six hits and two walks. Though the Mets lost, San Francisco newspapers were effusive. The Call said it was “one of the most brilliant and interesting games ever produced on a California diamond.”5 And the Examiner called it the greatest game ever played at the Haight Street Grounds.

The Metropolitans won the 1890 California League pennant, finishing 2½ games ahead of the Colonels.6 Working in two-man rotations, the league’s pitchers carried a heavy load. Lookabaugh pitched an astounding 803 innings for the 1892 San Jose Dukes and was never the same after that.

Carsey found success in the majors, winning 94 games for the 1892-97 Philadelphia Phillies. But he never threw another no-hitter. When interviewed in 1951 at the age of 80, he proudly mentioned the no-hitter he threw in San Francisco in 1890.7

3 As noted in Carsey’s SABR biography, evidence suggests that he was born on October 22, 1870. The game described here was therefore 10 days before his 20th birthday.

5 “They Divided the Honors.”