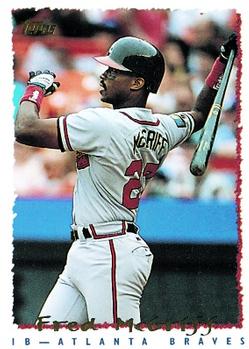 With a legendary starting pitching staff featuring a trio of future Hall of Famers, the 1996 Atlanta Braves didn’t usually need large outbursts of runs to accumulate their 96 regular-season wins. John Smoltz (24-8), Tom Glavine (15-10), and Greg Maddux (15-11) accounted for 54 wins; they, a pair of back-of-rotation starters,1 and an effective bullpen paced by Mark Wohlers’ 39 saves held opponents to a National-League-low 648 runs. The Braves countered with 773 of their own2 for a comfortable edge of just over three-quarters of a run per game (4.77 scored to 4.00 allowed) over the long haul of the season.

On May 19 the Braves had taken a half-game lead in the NL East over the Montreal Expos. By August 30 they had bumped that up to 12½ games, but then lost 11 of 13 games through September 14. That nipped the lead to 4½ games over Montreal, but Atlanta then righted things, winning eight of nine through September 23, and took the East crown by eight games over the Expos.

Needing only 10 runs in the three games it took Smoltz, Maddux, and Glavine, with a save by Wohlers in each game,3 to dispatch the Los Angeles Dodgers in a NL Division Series sweep, the Braves moved on to face the St. Louis Cardinals in the National League Championship Series. But they worked themselves into a hole — they were down three games to one, had been limited to 12 runs in the series, and were facing elimination on the road in St. Louis in Game Five. Atlanta showed the mettle their fans had come to expect in such circumstances and blasted Todd Stottlemyre and four more Cardinals pitchers for 14 runs while Smoltz (in seven strong innings of his own), Mike Bielecki, Terrell Wade, and Brad Clontz shut out St. Louis on seven hits to move the series back to Atlanta.

The Braves still trailed three games to two in the series, but Maddux (7⅔ innings) and Wohlers (1⅓ innings) took care of things two nights later on home ground as the Braves scratched out single runs in the second, fifth, and eighth innings to win, 3-1, and tie the series.

The stage was thus set for the decisive Game Seven on Thursday night, October 17. With Smoltz, then Maddux, having stemmed the Cardinal tide to get the Braves to this point, lefty Glavine got the call for this one. Chipper Jones, then in his second full season with the Braves and at 24 just getting started on what would be a Hall of Fame career, enthused, “Well, we’re confident. When you’ve got the last six Cy Youngs going for you, how much better can you get? We just need one more great performance from Tom Glavine.”4

St. Louis third baseman Gary Gaetti was a circumspect: “It’s down to one game. There’s no reason why the Cardinals can’t win a game.” His teammate Royce Clayton was a little more belligerent, discounting the fact that the Braves had won twice on the verge of elimination: “Momentum has nothing to do with it. You have to play baseball. You have to win a game whether it’s at home or on the road. They’re in that same situation. It’s just back to square one.”5

A crowd of 52,067 filled Atlanta-Fulton County Stadium and a national TV audience tuned in as Glavine retired Clayton, Willie McGee, and former Brave Ron Gant in the top of the first inning. It took him 19 pitches to do it, nine to McGee before he looked at a called third strike for the second out.

Donovan Osborne, 13-9 in the regular season and a 3-2 winner over fellow lefty Glavine in Game Three in St. Louis, was manager Tony La Russa’s choice for the pivotal game and called it “the biggest game of my career.”6 It didn’t go well. Whatever magic Osborne had strung together five nights before in holding Atlanta to two runs over seven innings wasn’t there this time. Marquis Grissom got things rolling with a single to center field on Osborne’s first pitch of the night. It went downhill from there for St. Louis as the Braves scored six runs on five hits. The crusher was Glavine’s three-run triple as Atlanta batted around.7 That finished Osborne after 23 pitches; he had gotten only two outs and was replaced by another starter, Andy Benes, who ended the first-inning carnage by inducing Grissom to tap him a comebacker.

Glavine was perfect through three innings and even after Clayton opened the St. Louis fourth with a single, retired the side in order when Javy Lopez gunned down Clayton at second base on an attempted steal. The Braves responded to the umbrage of having allowed a baserunner by scoring four more runs in their half of the inning on a pair of walks, Fred McGriff’s single, an error, and Lopez’s home run.

Down 10-0, La Russa kept the battered Benes in the game for the fifth inning, which the righty navigated safely. Breezing along with more efficiency than he had shown in the first inning, Glavine retired the Cardinals in order in the fifth before Tom Pagnozzi touched him for a leadoff single in the sixth that preceded three quick outs on six pitches.

The Braves were back at it in their sixth, this time against Mark Petkovsek. McGriff tripled, Lopez doubled him home, and after an out, rookie Andruw Jones drilled a two-run homer to left-center.8 Cruising with his 13-0 lead, Glavine got St. Louis in order on nine pitches in the seventh; McGriff added the last of Atlanta’s 15 tallies in the bottom of that inning with a home run off Rick Honeycutt that also scored Atlanta’s other Jones, Chipper, who had singled ahead of him.

Through seven innings, Glavine had thrown only 72 pitches in facing 22 hitters. Manager Bobby Cox gave him the rest of the night off, calling on Bielecki for the eighth and Steve Avery for the ninth. Neither allowed a run — Bielecki was perfect, but Avery needed a double play after a leadoff single, only the Cardinals’ fourth hit of the night, by Mike Gallego.

With no walks, only four scattered singles amply defended by an Atlanta caught stealing and two double plays, St. Louis didn’t advance a runner as far as second base all night.

Luxuriating in 17 hits, seven of them for extra bases, to get the win they needed to complete their NLCS comeback, the Braves, a team that relied on pitching, had erupted for 15 runs to advance to the World Series. And this was on the heels of 14 runs just two nights before.

As it turned out, one run would have done the job in Game Seven, and Cox might well have been fine with it. “You wouldn’t expect this many runs from any team,” he said after the clincher. “You would never imagine it. I thought every game here would be very tight, low-scoring. A couple of balls fell in, and then it just steamrolled. We had a lot of confidence. Not only did we pitch well. We hit well, too.”9

Forty-one-year-old Dennis Eckersley, later a first-ballot Hall of Famer (2004), who had picked up a relief win in Game Four, offered the Cardinals’ perspective. “They’ve proved it to us. They didn’t have to beat the hell out of us to prove it to us, that’s for sure.”10

The Braves continued their offensive onslaught in the first game of the World Series, whipping the Yankees, 12-1, in New York on October 20. Then they shut out the American League champs, 4-0, the following night. Smoltz, then Maddux, had started those games, and with the Series heading back to Atlanta and Glavine set to start Game Three, things looked rosy indeed for a repeat of the Braves’ 1995 championship. But the vicissitudes of baseball took over, including a few umpire calls that left Cox steaming, as Atlanta lost all three games at home — by scores of 5-2, 8-6 in 10 innings, and a crusher in Game Five when Andy Pettitte and John Wetteland made a one-run fourth inning stand up against Smoltz.11

Back home on October 26, the Yankees finished it off, nipping Maddux, 3-2, in Game Six. With the Braves’ offensive woes in the last two games, a few of those runs from the NLCS clincher would have come in handy in the fall classic. But it wasn’t to be. “We had our chances,” first baseman McGriff told writers. “We just didn’t get it done. It’s as simple as that.”12

3 The Atlanta pitching staff turned in a minuscule 0.96 ERA in the sweep.

7 Glavine was proud of his hitting. He had batted a career-high .289 in 96 plate appearance in 1996, with four doubles and three RBIs.

8 Lopez was named Most Valuable Player of the 1996 NLCS.

11 This was the last game played in Atlanta-Fulton County Stadium. The Braves opened their 1997 regular home season on April 4 at Turner Field, beating the Cubs, 5-4, in a night game. Back in form, they had 15 hits.