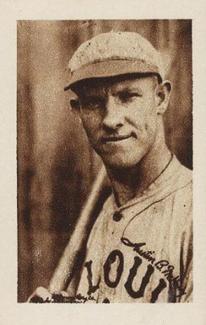 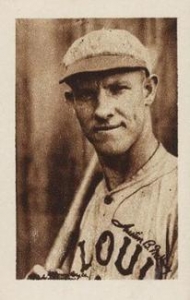 After finishing the 1921 season in the top five of National League hitters for doubles, home runs, RBIs, total bases, and extra-base hits, the St. Louis Cardinals’ Austin McHenry had established himself as one of the premier left fielders in baseball. In fact, after the season The Sporting News named McHenry as one of the top 10 left fielders of all time.1

The major leagues were beginning to put the low-scoring Deadball Era in their rear-view mirror as they wrapped up the 1921 regular season. The St. Louis Cardinals’ offense was proof of that evolution: They averaged 5.3 runs scored a game for the season, which would have led the league by half a run just two seasons earlier but in 1921 left them second in the National League to the New York Giants. Across the two leagues, scoring increased by a full run per game, with both superstars and role players alike contributing to the scoring surge. Austin McHenry was one such player who appeared to benefit from changes to the game, such as removal of damaged balls from play, born out of Ray Chapman’s death in 1920.2

As the Cardinals concluded the 1921 season with a home game against the Pittsburgh Pirates at Sportsman’s Park on October 2, McHenry was putting the finishing touches on his .350/.393/.531 offensive campaign. He did his best to help the Cardinals win what turned out to be the final game of their 1921 season. McHenry went 3-for-5 at the plate with one run scored. It wasn’t enough, though, as the Cards lost to the Pittsburgh Pirates, 4-3, and ended their season in third place with a record of 87-66. They finished behind the league-leading Giants and second-place Pittsburgh.

Despite the team’s disappointing finish to the season, the best seemed yet to come for McHenry. The native of Wrightsville, Ohio, had a career year. He posted an OPS of .984, which was 45 percent above league average. The extra fielding practice that manager Branch Rickey ordered his coaches to put McHenry through was paying off as well, as the right-handed McHenry led all National League left fielders in putouts and chances per game.

On a day when the weather “was more suitable for water polo than for baseball,” the Cardinals were unable to complete their comeback bid for second place.3 There were initially two games on the schedule that day, and if the Cardinals won both games, they would have ended the season in a second-place tie with the Pirates.

The Pirates had arrived in St. Louis for a five-game series with a slim chance of catching the Giants for the National League pennant, but the Cardinals ended those hopes by sweeping a September 29 doubleheader that opened the series.4 St. Louis’s 12-4 win a day later moved the Cardinals to two games behind Pittsburgh with two to play.5

They played nine innings on October 1 but did not reach a decision; the game was suspended by darkness, tied at 4-4. It was rescheduled as part of a doubleheader on the final day of the regular season.6

Both teams were eager to play out the games in spite of a rainy forecast, and for good reason; at stake were the second- and third-place World Series money shares. The difference between the two seedings was no small sum and was “something like $600 per man,” equal to almost $9,000 in 2021.7 ???? Endnote should also give the source of the inflation calculator

Although the St. Louis Post-Dispatch wrote that “[starting pitcher Bill Doak and either [Bill] Sherdel or [Jesse] Haines will work for the Cardinals” on the mound, Bill Pertica – who started the suspended game, ended up toeing the rubber to begin Sunday’s game as well.8 Neither start went well, and Pertica finished the two appearances with four earned runs on seven hits and three walks in 2⅓ innings.

Pirates starting pitcher Wilbur Cooper fared much better, as he “held the Cardinals in the hollow of his well-known hand” through four innings.9 In the fifth he was dented for two runs on back-to-back RBI singles by center fielder Les Mann and first baseman Jack Fournier. After Milt Stock loaded the bases with his second single of the game, the Cardinals appeared to be set up for success as Rogers Hornsby, one of the most prominent players and feared hitters in baseball, was coming to the plate.

Hornsby entered the final series of the season as the darling of the National League, leading in runs, hits, doubles, triples, and RBIs. He was putting the finishing touches on the first season of a five-year stretch that saw him post an astonishing triple slash line of .402/.472/.690, good for an OPS+ of 204. Unfortunately for Hornsby and the Redbirds, a hit was not to be had, and he popped out to first baseman Charlie Grimm, ending the bases-loaded threat with the game still tied 2-2.

The St. Louis offense had another chance to win the game in the bottom of the seventh inning, when Fournier led off the inning with a triple to center field.  Pittsburgh manager George Gibson made the biggest managerial move of the day when he decided to load the bases by intentionally walking both Milt Stock and Hornsby, leading to a sacrifice fly off the bat of Joe Schultz and a 3-2 lead for St. Louis. Cooper was able to escape the inning without giving up any more runs, and the Cardinals didn’t get another runner past second base the rest of the game.

Pittsburgh responded with two runs in the top of the eighth, when Grimm’s single drove in Max Carey and Dave Robertson. Cooper closed out the Cardinals in the eighth and ninth to complete his 22nd win of the season. With the second game now unimportant to the league race, it was canceled and the season was over.

Hornsby’s 1921 season ended on a down note: He went hitless over the final two games, finishing with a .397 batting average. This was the first time his batting average had dipped below .400 in over five months, having been above the mark since the season’s sixth game, on April 23. It was so close that local publications like the St. Louis Globe Democrat credited Hornsby with surpassing the .400 milestone at season’s end, but corrections were printed soon after.10

The 1921 season ended on a down note for both the Cardinals on a team level and Hornsby as an individual. Austin McHenry, however, hit .393 with an OPS of .967 over his final 30 games and put the finishing touches on what might have been the beginning of his prime baseball years.

Bad news began to take hold of McHenry’s career from there, as he dealt with severe vision issues during the 1922 season. His last game on the active roster was on August 22, and it would end up as his last day in a major-league uniform. Shortly after he left the team, it was discovered that he was suffering from a brain tumor that was believed to be originally caused by a beaning in July 1916, when McHenry played for the American Association’s Milwaukee Brewers. On November 27, 1922, just a few months after his final game, McHenry died in Adams County, Ohio. He was 27 years old.

It may have been a lackluster end of the season for the Cardinals, but October 2, 1921, marked the peak of McHenry’s career. Through no fault of his own, it would also be the last healthy year of his life. Fate denied McHenry a longer career and longer life, but his 1921 performance remains a highlight for the Cardinals and their fans.