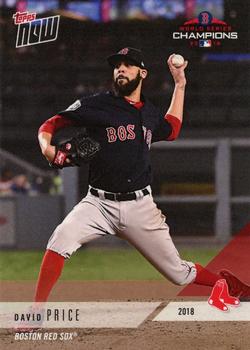 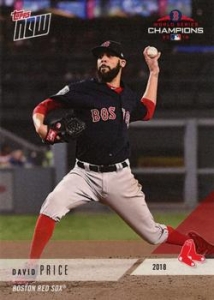 It was a year in which the Red Sox had never lost more than three games in a row all season long. And now they had won the first game of the 2018 World Series, 8-4.

The Dodgers started the same nine in Game Two. Facing them was David Price, who seemed to have overcome a personal postseason curse, having started 11 prior games and not winning even one – with a record of 0-9, until the clinching Game Five of the 2018 ALCS when he threw six scoreless innings and won the game that propelled the Red Sox into the World Series. He’d pitched exceptionally well in the second half of the 2018 season, 6-1 with a 2.25 ERA. For the 2018 regular season as a whole, he was 16-7 (3.58).

Los Angeles manager Dave Roberts countered with a left-hander, Hyun Jin Ryu, who had a 1.97 ERA in 2018 with a record of 7-3. He’d missed 3½ months in midseason due to a serious groin injury that landed him on the 60-day disabled list. He was 1-1 in the postseason, winning the first game of the Division Series but being hit hard for a loss in Game Six of the NLCS, with a no-decision in between.

The temperature was 47 degrees at game time.

Price walked first baseman David Freese in the first inning but retired all the other six batters he faced over the first two.

With one out in the bottom the second, shortstop Xander Bogaerts doubled high off the wall in left-center. After Boston third baseman Rafael Devers struck out, second baseman Ian Kinsler lined a single over the third baseman’s head and into left field.1 It was another two-out run. More than half the runs Boston had scored throughout the postseason were scored with two outs.2 Center fielder Jackie Bradley Jr. slapped a single through the shortstop hole, but Kinsler was thrown out trying to get to third base.

The Dodgers took the lead in the top of the fourth inning. Freese opened with a single to right. Shortstop Manny Machado hit the first pitch for a line single to center. Price walked left fielder Chris Taylor on six pitches. The bases were loaded with nobody out. The DH, Matt Kemp, drove in Freese with a sacrifice fly to center field, Betts throwing the ball to third. Price struck out center fielder Enrique Hernandez. Los Angeles right fielder Yasiel Puig dropped a single into shallow center, scoring Machado and the Dodgers had a 2-1 lead. Catcher Austin Barnes struck out.

Ryu set the Red Sox down in order. It was the fifth inning before they came back. With just three pitches, Ryu retired the first two batters. Catcher Christian Vazquez hit an opposite-field single to right and Mookie Betts singled right up the middle, to the left of second base and into center. Andrew Benintendi drew an eight-pitch walk (with three mound visits during the course of his at-bat.) Dave Roberts decided to bring in Ryan Madson to face Steve Pearce, relieving Ryu. Before the game, Madson had talked about the “difficulty of gripping the ball in cold weather” – yet here he was again on an even colder night.3 Five pitches later, Pearce had a base on balls and Vazquez scored. Tie game. J.D. Martinez, who had led the majors with 130 runs batted in, lined a single to right field that dropped in front of Puig, who had been playing deep in right. Betts and Benintendi scored. It was now 4-2, Red Sox. Madson struck out Bogaerts.

The Boston Globe’s Chad Finn pointed out that reliever Madson “has inherited five runners, allowed all of them to score, been on the mound when the Red Sox took the lead in both games … and has an ERA of 0.00 in the series.”4

That was the final score as well, but there were still four innings to play before that became the case.

Price faced three batters in the top of the sixth, threw eight pitches, and got three outs. Dodgers reliever Julio Urias did the same against the Red Sox.

Joe Kelly took over for Price and set down the batters one-two-three in the top of the seventh, two of them pinch-hitters (Max Muncy and Yasmani Grandal).

Kenta Maeda relieved Urias. He got an out, gave up a double to Betts, then got another out. Scott Alexander relieved Maeda, and Red Sox manager Alex Cora had Mitch Moreland pinch-hit for Pearce. A wild pitch saw Betts take third base. Moreland struck out.

The Red Sox asked Nathan Eovaldi to keep the Dodgers at bay in the eighth. He did, with a strikeout and then a groundout, and then a fly ball to left from pinch-hitter Joc Pederson.

Pedro Baez became the sixth pitcher for Los Angeles. It took him only five pitches to record three outs from J.D. Martinez, Bogaerts, and Devers.5

Closer Craig Kimbrel was called on again to hold the 4-2 lead. Kimbrel had been a superb shutdown closer but in late September seemed to weaken a bit. And in the postseason, he’d started to threaten Red Sox fans with heart attacks, giving up runs in every one of this first four appearances. He’d saved every one of those games, but had an earned-run average of 8.44.

Kimbrel was 5-1 with 42 saves in the regular season, after missing most of spring training while his infant daughter underwent a life-saving heart operation at Boston’s Children’s Hospital.

Red Sox pitchers had secured outs from each of the last 16 Dodgers batters they had faced. The Dodgers had mustered only three hits in the entire game.

For Price, it was his second strong outing in a row. He seemed to have finally put that personal postseason curse behind him.

The Red Sox had won both home games at Fenway Park and both teams headed to Dodger Stadium for Game Three in Los Angeles.

“It’s going to be warmer,” Dodgers right fielder Cody Bellinger reasoned. “And hopefully our bats will get hot too.”6 Bellinger, who was the MVP of the NLCS for the Dodgers, appeared only as a pinch-hitter in Games One and Two. The same was true of two other left-handed batters, Max Muncy and Joc Pederson. Among the three of them, they had accounted for 85 of the Dodgers’ 235 homers during the regular season. Muncy and Bellinger followed Matt Kemp as the most productive RBI men in the Los Angeles lineup. With the Red Sox starting a righty in Game Three, Roberts was going to better stock the lineup with left-handed hitters.

The Los Angeles Times’s Bill Plaschke blamed it on the Dodgers’ overuse of analytics. “The Dodgers are batting .175 so far in this series with just one extra-base hit. But you know what stat is more startling? Their three top home-run hitters – Max Muncy, Cody Bellinger and Joc Pederson – have combined for just nine at-bats in two games. They can’t hit home runs if they don’t play, and they didn’t start in either game for matchup reasons, and right now, that just seems weird. The club’s analytics-based strategy, which worked so brilliantly during the regular season and through two playoff rounds, is failing them now.”7

The Red Sox weren’t worried about heading to another team’s ballpark; they were 5-0 on the road in the 2018 postseason.

In addition to the sources cited in the Notes, thee author consulted Baseball-Reference.com, Retrosheet.org, and the YouTube recording of the game.

1 Kinsler had come to the Red Sox from the Angels in a July 30 trade. Red Sox second baseman Dustin Pedroia had been able to play in only three games, still suffering from a 2017 injury caused by a slide into second by Manny Machado. Eduardo Nunez (74) and Brock Holt (56) had played most of the games at second base for the 2018 team. During the Fenway Park games, though not on the roster, Pedroia was in the Red Sox dugout cheering on his teammates.

5 It was Devers’ 22nd birthday, but he was 0-for-4 with two strikeouts. That said, he saw the Red Sox take a two- games-to-none lead in the World Series.

7 Bill Plaschke, “A PAIR OF SOX; Desperate Team Needs Change of Scenery – and of Strategy,” Los Angeles Times, October 25, 2018: D1. Both Plaschke and Dylan Hernandez added complaints about the Dodgers’ use of the bullpen, in both games. See also Dylan Hernandez, “At Two Critical Moments, Analytics Failed the Dodgers. Now They Face an 0-2 World Series Deficit,” Los Angeles Times, October 24, 2018.