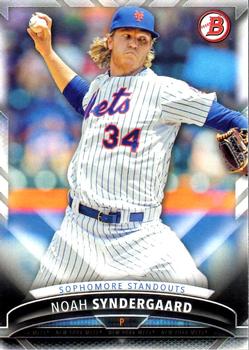 Returning home for the third game of the 2015 World Series after suffering two disappointing losses in Kansas City, the New York Mets hoped to turn things around on their home turf. The Royals were feeling confident after taking a 2-0 lead in the Series. They had shown they were not intimidated by the young Mets pitchers. Matt Harvey and Jacob deGrom, both known for their ability to accumulate strikeouts, had been able to get the Royals to swing and miss at only 10 pitches between them.1

Noah Syndergaard took the mound for the Mets as fans crowded into Citi Field dressed as Thor and wielding hammers in honor of Syndergaard’s nickname. Syndergaard said he had “a few tricks up my sleeve” for pitching to the Royals leadoff hitter, Alcides Escobar. He took no time showing what he meant as he brushed back Escobar on the very first pitch with a high and inside fastball.2 “I feel like it really made a statement to start the game off. You guys can’t dig in and get too aggressive because I’ll come in there,” Syndergaard said afterward.3

Although the big right-hander intended to show that the Mets were still in this Series. Even so, Kansas City managed to score in the first two innings. After Thor struck out Escobar swinging, Ben Zobrist doubled and Lorenzo Cain singled to push Zobrist to third. Eric Hosmer’s grounder to first baseman Lucas Duda forced him to make the play at second. Zobrist scored and the Royals were up 1-0 after just one-half inning of play.

David Wright, who had slumped in the first two games, came up in the bottom of the inning after Curtis Granderson singled and hit Yordano Ventura’s second pitch over the center-field wall. The Mets captain had simply changed his tune. He switched his walk-up music before the game due to his slump. Wright returned to Luniz’s 1995 West Coast anthem “I Got 5 On It.” It was a song he had picked at the start of the 2013 season as a reference to his jersey number. “The other one (Luke Bryan’s “Kick Up the Dust”) wasn’t working. So we had to change it up a little bit. Back to what was working,” Wright said after the game.4 The Mets took a 2-1 lead.

But the Royals showed why they had been so successful all season when they came to bat in the second inning. Salvador Perez singled down the third-base line, Alex Gordon lined a base hit to right, and Alex Rios doubled to left. Perez scored, but Gordon was thrown out at third on a heads-up throw by left fielder Michael Conforto. Gordon was originally called safe, but Wright quickly called on the Mets to request a review. The replay confirmed that Wright had tagged Gordon’s helmet before the runner’s hand touched the bag.5 Ventura sacrificed Rios to third and Rios scored on a passed ball by Travis d’Arnaud. The Royals were back in front, 3-2.

New York showed its determination to stay in the Series in the bottom of the third inning. After Syndergaard led off with a single, Granderson smacked a pitch into the right-field bleachers. It barely stayed fair, but it was good enough for the Mets to take back the lead, 4-3.

The Mets added to the lead as the Royals made several mental errors over the next few innings. In the bottom of the fourth, Duda hit a leadoff single to left for the Mets and d’Arnaud doubled into the left-field corner. Conforto hit a grounder between first and second base. Hosmer, the first baseman, ranged over for the ball and turned to see no one covering first base. Hosmer dove for the bag, but Conforto beat him there. Another run scored, and the Mets took a 5-3 lead.6

Meanwhile, Syndergaard had started to establish himself on the mound. He retired the Royals in order in the fourth and fifth frames, striking out three. In the sixth inning, though, he loaded the bases on an infield single and two walks; it suddenly looked as if the Royals could come back. Syndergaard responded by throwing a slider that Rios hit for an easy third out. As Syndergaard walked off the mound, he clenched his fist in a sign of his determination and focus.7 Still, the young pitcher was pulled for a pinch-hitter in the bottom of the sixth after striking out six and keeping the Royals batters guessing most of the game.

Franklin Morales took over as the Royals’ fourth pitcher in the bottom of the sixth inning. Pinch-hitter Juan Lagares singled with one out, and Morales hit Wilmer Flores with a pitch. Juan Uribe, the second Mets pinch-hitter of the inning, singled to bring home Lagares. Granderson now came up and hit a grounder back to the pitcher. Morales looked around the infield and threw late to second base.8 “[Morales] said he heard [Perez] say, ‘Home.’ So he stopped and turned, and it was a mess from that point,” said Royals manager Ned Yost afterward.9

Yost brought in Kelvin Herrera to replace Morales. Wright singled to right field on Herrera’s first pitch. Flores and Uribe scored, giving Wright four RBIs in the game. Daniel Murphy worked a walk to load the bases. Yoenis Cespedes’ sacrifice fly to left field scored Granderson. By the time Duda struck out looking for the third out, the Mets were up 9-3.

Addison Reed took over the pitching duties from Syndergaard in the seventh, and got out the side in order on just 12 pitches. Tyler Clippard came out of the bullpen for the Mets in the eighth and retired the Royals in order.

The Mets turned to Jeurys Familia to close out the game and get the Mets their first win of the Series. Familia had enjoyed a flawless postseason until he blew a save in Game One.10 He returned to form this evening. First, he got Perez to ground out, then he struck out Gordon on five pitches, and got pinch-hitter Kendrys Morales to ground out and end the game.11

In the end, it was Wright’s night at Citi Field. He enjoyed the postseason game of lifetime. “This is what you dream about as a kid,” he told the sportswriters. “You’re thinking about playing in a World Series game, and on top of that being able to contribute with a few RBIs and a home run. Running around the bases, it’s just like floating. You can’t describe the excitement of hitting the home run, crossing home plate, high-fiving your teammates, and looking up and seeing people going absolutely nuts. It’s one of those memories, at least for me that will stick with me for the rest of my life.”12

10 Familia allowed a one-out home run to Alex Gordon that tied Game One at 4-4 in the ninth inning. Kansas City went on to win 5-4 in 14 innings.