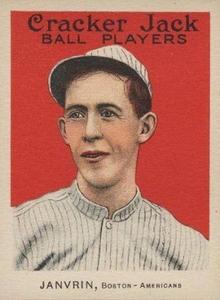 There was nothing on the line as the Washington Senators hosted the Boston Red Sox on October 4, 1913, in the final game of the season for both teams. The Philadelphia Athletics already had won the American League; Washington had clinched second place, and Boston fourth, by splitting a doubleheader the day before.

The Boston Globe called this Saturday afternoon ballgame “probably the most farcical exhibition of the National game that was ever staged.”1 Washington built a 10-3 lead and, despite much tomfoolery, held on to win 10-9 over the reigning World Series champions.

The contest was essentially an exhibition, featuring seldom-used players, players out of position, and position players as pitchers. Even retirees went into action: Washington manager Clark Griffith (age 43) pitched one inning, played outfield, and collected his first hit since 1906, and coach Jack Ryan (age 44) played catcher for the first time in 10 years.

Washington generated still more oddities. Walter Johnson – whose pitching earned him the 1913 Chalmers Award as the AL’s Most Valuable Player – played center field, and batted cleanup. Both Eddie Ainsworth and Joe Gedeon pitched for the only time in their major-league careers, with the former flopping and the latter saving the game.

Washington’s Germany Schaefer stood out as the “prize clown of the troupe.”2 He caught imaginary fly balls, hid behind an outfield fence, threw a ball behind his back for an infield assist, and surrendered a home run while pitching.3 A retelling of Schaefer’s antics warranted a separate story in the Washington Times, which included this disclaimer: “No description will  ever give you more than a faint idea of the antics of the Griffmen.”4

The silliness did not surprise the Washington Evening Star’s J. Ed Grillo, who reported in pregame coverage, “Today’s game is not apt to be for blood.” Learning of Griffith’s intention to shift players around the diamond, Grillo predicted, “[A]t the finish it will be turned into a farce.”5 The Washington Herald leaked Griffith’s plan to pitch one inning, and foresaw a “unique ballgame.”6

The game was designated “Army Day” to honor cavalrymen training at Winchester, Virginia. About 3,000 soldiers – including two bands – were the Senators’ guests.7 Throughout the contest, troopers enthusiastically cheered, and the bands provided music.8

The 8,000 spectators got their first surprise when Johnson ran onto the field, bypassed the pitcher’s mound, and took his position in center field. On September 29 Johnson had thrown his 11th shutout and chalked up his 36th win of 1913. But on this day, instead of Johnson toeing the rubber, Dick “Mutt” Williams, recently purchased from Helena, Montana, of the Union Association, made his major-league debut for the Senators at age 21.

Boston’s Fred Anderson, loser of all five of his decisions in 1913, took his scheduled turn on the hill, but Red Sox manager Bill Carrigan joined the frivolity by stationing relief pitcher Charley Hall at second base and batting him sixth.

Washington jumped ahead in the first when Acosta tripled and Danny Moeller singled him home. Moeller took second on a groundout and scored on Johnson’s single. Johnson stole second, went to third on Chick Gandil’s single, and stole home on the front end of a double steal, making it 3-0.9

Boston closed the gap in the second inning. Clyde Engle rapped the first of his four singles, and he scored ahead of Hal Janvrin, who blasted a pitch to center over Johnson’s head and raced around the bases for a home run. But in the third, Washington regained its three-run advantage on singles by Moeller and Eddie Foster, followed by Gandil’s double, scoring both men to make it 5-2.

Each team scored in the fourth. Boston’s Harry Hooper walked, went to third on an error, and dashed home on Engle’s infield dribbler. Washington responded with three runs in its half of the frame – highlighted by the first of John Henry’s two triples in the game – to take a comfortable 8-3 lead.

Both teams “had played real baseball” to that point.10 Things changed when Schaefer replaced Moeller in the fourth, and started his comedy act in the fifth. Griffith also began parading relief pitchers in the fifth, and, as promised, he shifted players around the diamond without concern for experience or aptitude.

Bentley – three days removed from a four-hit shutout of first-place Philadelphia – kept Boston off the scoreboard in the fifth and sixth. The Senators extended their lead to 9-3 in the fifth inning when  Alva “Rip” Williams slapped a single and Henry’s second triple brought him home.

Joe Engel, the Senators’ number-four starter, threw a scoreless seventh inning, but when he came to bat in the bottom of the frame, Griffith stepped in to pinch-hit. Griffith, who had hit over .300 in both 1895 and 1901, proved he still knew how to handle a bat; he doubled, sending Johnson home with Washington’s final run.

Griffith had been a pitcher, beginning with the St. Louis Browns in 1891 (before the pitching distance was set at 60 feet 6 inches in 1893). He won 237 games in his career, but had last pitched regularly in 1906.11 Nevertheless, Griffith threw the eighth, and called on coach Ryan to be his catcher.

Griffith and Ryan had a combined age of 88 years, 276 days. No other National or American League battery of the twentieth century was older.12

The first batter to face Griffith was Wally Rehg, who crushed a pitch over Johnson. Left fielder Acosta chased it down, relayed to Johnson, and Johnson fired a strike to a waiting Ryan, who tagged out Rehg attempting to stretch a triple into a home run.

With one out, Bill Mundy tested Griffith and Ryan with a bunt. Ryan, hobbling like a centenarian,13 grabbed it on a bounce and fired to first base for the second out. Hooper grounded into the third out, and Griffith walked from the mound to “deafening applause,” acknowledging the cheers by doffing his cap to the crowd.14

The Senators nearly blew their 10-3 lead in the ninth. Griffith remained in the game, but moved to right field, and Schaefer started the inning on the mound. Boston’s Lewis bunted safely, prompting Schaefer to exchange places with Walter Johnson.

With Johnson pitching, Washington appeared to be getting down to business. Instead, Johnson threw with little effort, making things worse. Engle singled, and Steve Yerkes – who had replaced Hall in the lineup – doubled, tallying Lewis and Engle. After facing just two batters, Johnson was banished to center field, and Schaefer resumed pitching.

Janvrin greeted Schaefer with a hit on a line to the scoreboard between Johnson and Griffith. Before Griffith could throw it in, Yerkes scored and Janvrin circled the bases for his second homer of the day, making it 10-7. Wally Snell slapped a single in his final major-league at-bat, and Schaefer – failing to retire a batter – retreated to the outfield.

Ainsmith – normally a catcher, but today a second baseman – took the ball to face Chester “Pinch” Thomas, batting for Anderson. Thomas smacked a high fly to right; it was misjudged, and bounced off Griffith’s head.15 Thomas sprinted to third, was credited with a triple, and Snell trotted home ahead of him, scoring the only run of his six-game career.

Thomas scored easily when Rehg blasted an Ainsmith pitch to the outfield. Once again Rehg attempted to circle the bases, and he was tagged at home plate for the first out of the inning. Now Boston trailed by one, 10-9.

That was enough for Ainsmith, who faced two batters and yielded two triples. Gedeon replaced Ainsmith, and Mundy – in his final major-league at-bat – flied to Johnson.

True to form on this oddball day, Lewis made the final out of the game while batting out of turn. Hooper, the scheduled hitter, had showered after the eighth inning, and changed clothes! With Hooper indisposed, Lewis stepped into the batter’s box one turn early and bounced out, ending the game.

All this action took 1 hour and 50 minutes. Mutt Williams was rewarded for his cross-country trip from Helena with his only major-league win. Anderson lost, finishing 1913 at 0-6.16 He walked three and surrendered 18 hits, including three doubles and three triples, yet he pitched a complete game. Anderson took his lumps because Boston had nobody else to pitch.17

What are we to think? Every newspaper account declared it a farce – just as Grillo had predicted. Griffith and Schaefer treated it like vaudeville, complete with slapstick comedy. The crowd cheered throughout, and was entertained.

But fans also expect competition. Hooper leaving early, and Lewis batting out of turn – grounding out despite the contest hanging in the balance – gives the impression Boston was interested in ending the game, not winning it. The Senators and Red Sox had exhibitions scheduled in New York the next day; perhaps both teams agreed it was time to quit and catch the train.18

For Walter Johnson, the two runs he allowed in this laughable season finale increased his earned-run average from 1.09 to 1.14. Fifty-five years later, Bob Gibson of the St. Louis Cardinals finished his remarkable 1968 season with a 1.12 ERA, two points lower than the Big Train. Gibson’s mark remains the lowest single-season ERA recorded by any qualifying pitcher in the American or National Leagues since the Deadball Era.

In addition to the sources cited in the Notes below, the author consulted Baseball-Reference.com and Retrosheet.org for pertinent information, including the box score. The author also relied on game coverage in the Boston Globe, Boston Herald, Washington Times, and Washington Herald newspapers, and SABR Baseball BioProject biographies of several players involved in the game.

10 “Red Sox and Senators Conclude in Burlesque,” Boston Herald, October 5, 1913: 6. The Springfield, Union disagreed, claiming it “was a farce throughout, players of both teams indulging in comedy and giving their opponents an opportunity to fatten batting averages.” “Washington 10, Boston 9.”

11 Griffith had pitched in the Senators’ final game of 1912 without retiring a batter.

18 On October 5 Boston beat Long Island City 6-1 with Hall pitching, and Rehg starring at the plate. Washington beat Hoboken, New Jersey, 2-1 in Manhattan, with Schaefer clowning. Walter Johnson’s All-Americans lost 1-0 in Schenectady, New York, to the Mohawk Colored Giants in a game nearly ended by a players strike and riot, and ultimately called by darkness after five innings.