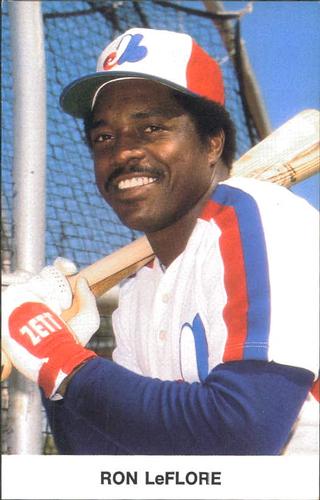 The Expos and Phillies, sporting identical 89-70 records, went head-to-head in a three-game series at Olympic Stadium on the final weekend of the 1980 season to determine the champions of the NL East. After defeating Montreal 2-1 on Friday night on a pair of RBIs from Mike Schmidt, Philadelphia clinched the division on Schmidt’s dramatic 11th-inning home run the next day, handing the Expos their most devastating loss up to that point in the team’s history.

Sunday’s series finale was a relatively meaningless affair, with Montreal reduced to playing for pride and individual statistics. One of those stats was the 95 stolen bases racked up by Ron LeFlore, leaving him only one behind Omar Moreno of the Pittsburgh Pirates for the league lead.

The Expos had acquired LeFlore in a trade with the Detroit Tigers for Dan Schatzeder the previous December, a move that was intended to close the speed gap with the Pirates, who won the division by a mere two games over Montreal in 1979. The addition of another speed-burner energized their offense and made Expos fans delirious over the “LSD” (LeFlore-Scott-Dawson) at the top of the batting order. The fleet-footed trio of LeFlore, Rodney Scott, and Andre Dawson terrorized opposing pitchers all season long, stealing a combined 194 bases, which was more than the entire roster of 22 of the other 25 major-league teams.

The previous record for stolen bases in a season by an Expo was 50, set by the light-hitting Larry Lintz in 1974.1 LeFlore easily broke that record, surpassing Lintz on July 16 in only his 81st game of the year. But LeFlore broke a bone in his wrist on September 11 chasing down a foul ball. Rather than going on the disabled list, LeFlore, wearing a cast on his hand, was used as a pinch-runner for the remainder of the season. His 91 thefts at the time of the injury gave him a six-steal margin over Moreno, but his lack of basestealing opportunities made it difficult to hold onto the lead for very long. In a September 23 game between the Expos and Pirates, LeFlore watched Moreno swipe a base with the Bucs down 7-0 in the sixth inning and another with the score 7-1 in the eighth. An incensed LeFlore vowed revenge, yelling from the dugout, “Run wild, you (expletive deleted)!”2

Although their hearts had been broken over the previous 48 hours, the enthusiastic Montreal fans gave their team a standing ovation as the players took to the field for the final game of the season. Meanwhile, Moreno was heading out to his spot in center field for a game at Three Rivers Stadium against the last-place Chicago Cubs. With an injured LeFlore sitting on the bench, Moreno’s chances of winning a third consecutive stolen-base title looked good.

Not surprisingly, the Philadelphia and Montreal starting lineups included few regulars, as both managers treated their backups and September call-ups to some playing time now that the Eastern Division race had been decided. Montreal starter Steve Ratzer made his major-league debut, while the Phillies countered with 19-year-old Mark Davis, who was making his first career start and second big-league appearance.3

The right-handed Ratzer lasted only four innings, giving up five earned runs on nine hits, including a two-out double in the top of the fourth to 38-year-old Tim McCarver that knocked in a pair of runs.4 The beleaguered Montreal pitcher was removed for a pinch-hitter in the bottom of the fourth inning with the Phillies up 5-2. The Expos cut the lead to 5-4 with two out in the bottom of the sixth inning on a two-run single by second baseman Tony Bernazard off reliever Randy Lerch.

With Bobby Ramos due up fifth in the seventh inning, Expos manager Dick Williams told LeFlore to be ready to run for the Montreal catcher. Brad Mills was the only Expo to reach base in the seventh, so Ramos led off the bottom of the eighth inning, and he stroked a single to center field. By this time, the game in Pittsburgh had already ended and Moreno hadn’t stolen any bases. LeFlore had a golden opportunity to claim the stolen-base title − except that he was nowhere to be found on the Expos bench. In a bizarre twist, LeFlore emerged from the Phillies dugout and made his way over to first base. He admitted in a 2013 interview that he had been visiting with Pete Rose in the Phillies clubhouse and it was Rose who had told him he needed only two steals to finish the season ahead of Moreno.5

LeFlore promptly stole second base. In that 2013 interview, LeFlore recalled that the throw from rookie catcher Ozzie Virgil Jr. went into center field, although he had no intention of advancing to third on an error. Instead, the speedster swiped third base for his 97th theft of the campaign, clinching the NL stolen-base crown, and the Montreal fans saluted him with a rousing standing ovation. Moments later, pinch-hitter Larry Parrish hit a sacrifice fly to easily score LeFlore with the tying run. “Then I went back into the Phillies clubhouse and drank some more champagne,” said LeFlore.6

The game went into extra innings, and the Phillies scored a pair of runs in the top of the 10th inning to pull ahead 7-5. After retiring the first two batters in the bottom of the 10th, Philadelphia reliever Warren Brusstar gave up an infield hit to Chris Speier and a single to pinch-hitter Willie Montañez that moved Speier to third base. “Super Sub” Jerry White, who had filled in admirably during LeFlore’s absence, followed with a three-run home run to give the Expos an unlikely come-from-behind victory, 8-7. The win left Montreal only a single game behind the playoff-bound Phillies.

Expos manager Williams was in a reflective mood after the game. “It doesn’t mean much but we wanted to win this for the fans,” he said. “They’ve been terrific all year and anybody who knocks the Montreal fans has rocks in his head. They deserved better than we were able to give them.”7

To put their barn-burner of a stolen base battle in perspective, LeFlore’s and Moreno’s base-stealing totals for 1980 still stood as the single-season record for their respective franchises as of 2020. LeFlore, having led the American League in steals with the Tigers in 1978, became the first player to win the stolen-base crown in both the National and American Leagues. The feat wasn’t duplicated until Juan Pierre of the White Sox led the AL with 68 steals in 2010 after winning NL stolen-base titles in 2001 and 2003. As of 2020, LeFlore and Pierre remained the only two players to have led both leagues in stolen bases.

At the time, most Expos fans were completely unaware of the dark side to LeFlore’s season. He took ample advantage of the city’s legendary nightlife, along with a group of partyers that regularly included teammates Ellis Valentine, Rowland Office, Scott, and Bill Lee.8 At times, his heavy drug and alcohol use affected his play on the field, as was the case with the immensely talented Valentine. Four times during the season, LeFlore showed up at the ballpark just before the national anthem(s) were played.9 Despite showing little regard for team rules, he was never disciplined by Williams.10

“That was the greatest year of my career − not stats-wise, but fun-wise,” LeFlore recalled over three decades later. “I started using drugs then, really more than I had before,” he acknowledged. “That was the only bad thing about that season. I’d stay up all night long. I remember one time I was up for five or six days straight. Never went to bed.”11

At season’s end, the 32-year-old LeFlore declared himself a free agent with the intention of signing a lucrative multiyear deal. Although he wanted to return to Montreal, the feeling wasn’t mutual. Sadly, LeFlore had worn out his welcome in Montreal in just a single season. Williams didn’t want him back, believing LeFlore was impossible to control, and the front office was concerned about his impact on the team’s young, impressionable players.12 The Expos offered him a token one-year deal knowing full well that it wouldn’t be accepted. Two weeks after being the only team to select him in the free-agent draft, the Chicago White Sox inked LeFlore to a three-year contract for over $2 million, with a club option for an additional year.13

The Expos had other plans for left field in 1981. They had a 21-year-old prospect learning how to play the position in the Dominican Republic winter league under the tutelage of Felipe Alou, and he was even faster than LeFlore. His name? None other than future Hall of Famer Tim Raines.

3 Mark Davis went on to win the 1989 Cy Young Award as a closer with the San Diego Padres.

4 It was the last hit of Tim McCarver’s playing career, which began in 1959. McCarver had retired at the end of 1979, and he was a Phillies broadcaster in 1980 before being called up when rosters expanded in September to allow him to play in a fourth decade. He was the first catcher whose career started in the twentieth century to play in four decades.

5 Jim Hawkins, “Greatest Year of My Career,” Toronto Sun, February 27, 2013: S-18.
Pete Rose was the only Philadelphia regular in the starting lineup, and he was removed for a pinch-runner in the top of the third inning.