Pittsburgh’s Chief Wilson set the major league single-season triple records by stroking his 36th three-bagger during the Pirates’ final game of the season, an away contest in Cincinnati. On the same day but in St. Louis, Cleveland’s Shoeless Joe Jackson raced around the diamond for his 26th triple of the season, establishing the American League mark.

In 1912, Pittsburgh spent the season chasing the New York Giants, who won the pennant by 10 games (but lost the World Series to the Boston Red Sox in eight games). The second-place Pirates entered this final contest, winners of eight of their last 11 games. Meanwhile, Cincinnati, who finished the season in fourth place in the National League, had lost eight of 11 (plus a tie).

In this season finale, “the Pirates were on a true rampage and could not be stopped.”1 Pittsburgh plated runs in six of their nine times at-bat, and “Every man on the team cut in with at least one bingle and several of them fattened their batting averages plethorically.”2 Honus Wagner hit his seventh home run of the season, a solo shot in the seventh inning. Howie Camnitz picked up his 22nd win of the season. The 5-feet, 9-inch right-hander “was powerful except in the one round [the fifth inning] when our boys got to him for six consecutive bingles, after two men were gone, winding up with a home run by Hobby [Dick Hoblitzell], which was good for a new suit of clothes for the Red first-sacker.”3 That gave Cincinnati a brief 6-5 lead, but Pittsburgh roared back in the sixth to score five times and added six more runs in the final three frames. Rube Benton was tagged with his 20th loss of the season. The Pirates raked Reds pitching for 19 hits, led by Dots Miller (4-for-5, four RBI), Wagner (3-for-5, four runs scored, five RBI), Alex McCarthy (3-for-4, two walks, four runs scored) and Max Carey (3-for-6, three runs scored). Wilson finished with two hits in five trips, but he did drive in three runs.

In his final at-bat, Wilson “tried for a home run in the ninth but was cut down at the plate.”4 That triple gave him 36 for the season. However, the Cincinnati Enquirer stated, “It was the thirty-seventh of that length,”5 and the Pittsburgh Post-Gazette told its readers, “Wilson closes the 1912 season with 37 three-baggers. The Chief tried to make it his thirteenth homer, but was out at the plate.”6 Had he been safe, Wilson would have joined teammate Wagner as the only visiting players to make a home run at Redland Field.7 Seven homers were hit by Cincinnati batters in their home ballpark in 1912, and the only round-tripper by a visiting player came in the last game of the season.

In the American League, Cleveland was closing its season in St. Louis. Unfortunately for the Browns, “a crowd of more than 10,000 came out to watch the last show of the A.L. campaign and were treated to some ragged baseball on the part of the Stovallized aggregation.”8 Why? “The pitching of Mack Allison and Earl Hamilton was poor, while the fielding, especially that of ‘Bunny’ Brief and Eddie Miller, was worse.”9 Allison was tagged for seven hits and five runs in only 4-1/3 innings pitched, and he was charged with an error. In his 2-2/3 innings, Hamilton offered up five hits and three runs. Only Buddy Napier seemed to be effective, blanking the Naps in his two frames of hurling. The Naps scored twice in the fourth inning and four times in the fifth, before adding solo runs in each of the sixth and seventh. For the visiting team, “the big left hander”10 Willie Mitchell had allowed a single run (in the fourth) until the bottom of the ninth, when the Browns mustered two more tallies. Cleveland earned its 75th victory of the season while handing the Browns their 101st loss. St. Louis batters only put together five hits in the game. 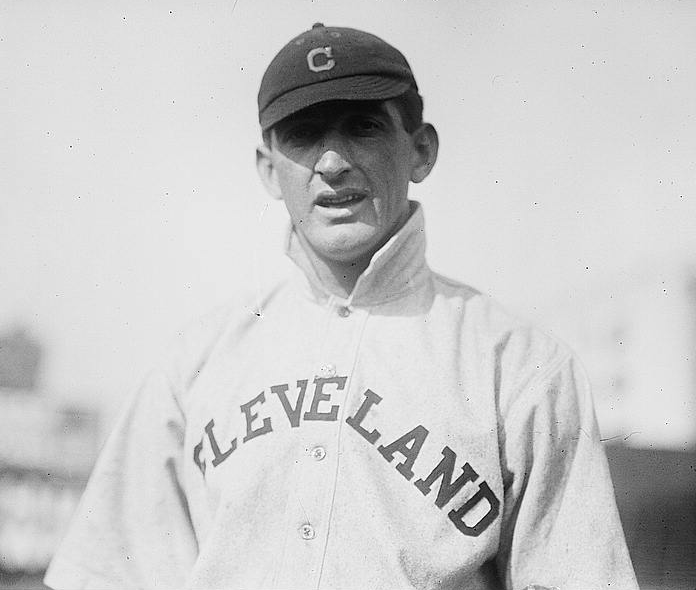 Although Jackson set a record, Nap Lajoie was the star of Cleveland’s day. The St. Louis Post-Dispatch reported that the team captain “went up five times and poled as many hits. Four of his hits were line drives.”11 The first five batters in the Naps’ lineup “cornered the hit market,”12 garnering all of their 13 hits. Jackson was 3-for-5, with a single, double and triple. He was a home run shy of hitting for the cycle and scored three times. Every time he got on base, Lajoie followed with a base hit. The local papers reminded the readers that two years previously, Cleveland had faced the Browns on the final day of the season, and in that game, Lajoie “was credited with making eight hits in a double-header with the Browns at Sportsman’s Park and caused a scandal that resulted in the discharge of Jack O’Connor as manager of the Browns.”13

Of the 16 teams in the major leagues, only the Browns and the Chicago White Sox (both in the American League) played the full 154-game schedule. Because they had three tie games, the Browns played 157 games, while the White Sox played 158 (due to four tie ballgames).

1912 was the first of three seasons in which Jackson led the American League in triples. The others were 1916 (21) and 1920 (20), when he played with the Chicago White Sox. The lefty batter finished his 13-year career with 168 triples. That still places him in the 26th position all-time.14

More than 100 years later, both of these league records still stand. Detroit’s Sam Crawford tied Jackson’s American League mark in 1914. Crawford played the final seven games of the season with an opportunity to break the record, but the best he could muster was two doubles in 26 at-bats.

Wilson hit his 26th triple on July 26th, and he is the only player after 1901 to break the 30-triple plateau. In a five-game stretch from June 17-20, he hit six triples. Heinie Reitz, playing for the 1894 Baltimore Orioles, hit 31 triples to lead the National League. Eight seasons earlier, Dave Orr also hit 31 triples, while playing for the New York Metropolitans in the American Association. Wilson never hit more than 14 triples in any of his other eight seasons in the major leagues.

Harry Davis has the largest margin (signified by Δ). Wilson’s delta is 17. Crawford accomplished this feat three times. Since 1922, this phenomenon has happened only once, by Cleveland Indians outfielder Dale Mitchell (1949), and it has not happened since. Mitchell also led the American League in 1949 with 203 hits.

In addition to the sources mentioned in the notes, the author consulted baseball-reference.com and retrosheet.org. Special thanks to Sheldon Miller for fact-checking and suggestions.

7 “Notes of the Game,” Cincinnati Enquirer.

15 Thanks to SABR member Sheldon Miller for help with the table’s data.