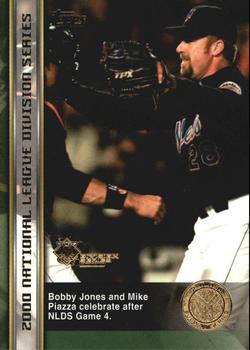 Per Bobby Valentine, on the eve of what was to be the most important game of Bobby Jones’s baseball life, Jones’s wife, Kristi, spoke briefly with the Mets manager. Kristi said to Valentine, “Is Bobby pitching tomorrow?” After Valentine said, “Yes, he is,” Kristi said, “You won’t be sorry. He’ll pitch the game of his life.”1

I also thought Bobby was the guy to go in this game since the beginning of the series. He’s a pro. Look it up in the dictionary and you’ll see his picture beside the word ‘pro.’”2

In the game’s aftermath, Kristi slightly contradicted the Valentine accounting, saying that she had spoken with Valentine and after being assured that her husband would pitch the game said, “Oh yeah, he’s definitely ready. It’s a guaranteed win. Guaranteed.”3

“I’m so happy for Bobby Jones. I’m so proud of him. To go out and pitch the best game of his life and dismiss all the critics who thought it was a bad decision. He went out and nailed it.” — Al Leiter4

The New York Mets, after losing the first game of the Division Series to the Giants, had won the next two games and were poised to clinch the series as they opposed the San Francisco Giants at Shea Stadium in front of 56,245 onlookers. The Mets’ pitcher was Bobby Jones. The Mets had two fellows named Bobby Jones on the roster. This was the guy who had gone 11-6 during the regular season with a 5.06 ERA. Bobby J. Jones was the Mets’ first-round draft pick in 1991 and had first pitched for them in 1993. He had a 74-56 record over eight seasons. During the final innings of the game, the large crowd was chanting, “Bobby, Bobby!” At game’s end, in the Mets’ clubhouse, his teammates would be chanting as one, “Bobby Jones, Bobby Jones, Bobby Jones,” after the California native and Fresno State alumnus had hurled a one-hitter, as the Mets won 4-0 to advance to the NLCS and face the St. Louis Cardinals.

Jones, after being named to the All-Star team in 1997 (15-9), had been slipping and spent parts of the 1999 and 2000 seasons in the minor leagues. with the Mets’ Triple-A squad in Norfolk, Virginia. His trip to Norfolk for two weeks during June 2000 came after he started the season with a 1-3 record in eight starts with the Mets and posted a 10.19 ERA in 32⅔ innings. He accepted the temporary reassignment (two starts) as the Mets would not be needing him as a starter during that time, and he knew that he had to work on his mechanics if he was to help the Mets advance to the postseason. After returning to the Mets, he went 10-3 the rest of the way. Down the stretch he won three of his last four starts as the Mets gained the NL’s wild-card berth.

The Giants’ pitcher was Mark Gardner, another Fresno State alumnus and a good friend of Jones.  The 12-year veteran (eight years Jones’ senior) had gone 11-7 for the Giants in 2000 with a 4.05 ERA.

The ceremonial first pitch was thrown out by a man best remembered as having coined the phrase “Ya Gotta Believe” during the Mets pennant run in 1973 – Tug McGraw.

The big name in the Mets offense was Mike Piazza. Most of the supporting cast was not that well known beyond New York, but it was that supporting cast that played a big role in putting the Mets in position to advance further in the postseason.  Benny Agbayani had had career highs in games played (119), batting average (.289), extra-base hits (35), and RBIs (60). On this Sunday afternoon, he was stationed in left field. After a game-winning 13th-inning homer in Game Three, he went 2-for-4 in Game Four, and although neither of his hits figured in the scoring, the crowd gave him a standing ovation when he was removed for a pinch-runner after doubling to lead off the ninth inning.

On this day, it was Robin Ventura’s time to shine. He had come to the Mets in 1999 after 10 years with the Chicago White Sox and had performed exceptionally well during his first year in Queens, batting .301 with 32 homers and 120 RBIs. All were career highs. He finished sixth in the MVP balloting and received his sixth Gold Glove. But in 2000, Ventura went into what amounted for him to a yearlong slump, batting only .232. But still fresh in the minds of Mets fans was Ventura’s final at-bat in Game Four of the prior season’s NLCS with the Braves. In the bottom of the 15th inning with the Mets trailing 2-1 and facing elimination, Ventura hit a bases-loaded fly ball over the center-field fence. Euphoric Met fans mobbed Ventura midway between first base and second, and he was credited only with a game-winning single.

A year later, with two out in the first inning on October 8, 2000, Ventura got a chance to touch all the bases. Piazza walked, and Ventura slammed a homer off the lower right-hand corner of the big scoreboard in right field. The Mets had all the runs that Bobby Jones would need.

Then Jones went to work, pitching four perfect innings, striking out Barry Bonds in his first two trips to the plate, before Jeff Kent broke up the perfecto with a leadoff fifth-inning double over a leaping Ventura, who barely touched the ball as it eluded his outstretched glove. After recording two outs, Jones walked the bases full, bringing up Gardner. Giants manager Dusty Baker chose not to send up a pinch-hitter, and Jones retired Gardner on a popup.

Ventura, in the joyous clubhouse after the game, took extra time to point out the value to the team of second baseman Edgardo Alfonzo. Fonzi didn’t just pop on the scene. In 1999, he had batted .304 with 27 homers and 108 RBIs, winning the Silver Slugger Award and finishing eighth in the MVP balloting. In 2000, he was named to the All-Star team and batted a career-high .324. On this day, he came to bat in the fifth inning with rookie Timo Perez on base.

Perez was a late-season addition to the Mets lineup, filling in for the injured Derek Bell, at a time when it seemed like many players were filling in for injured somebodies, and played in 24 September games batting .286. In the playoffs, he was an igniting spark. He went 3-for-5 in the Game Two win, drove in the Mets’ first run in Game Three and, with one out in the fifth inning, doubled to right field, sending Jones to third base. Jones had reached safely after striking out, as the pitch bounded past catcher Doug Mirabelli of the Giants. The stage was set for Alfonzo. The Mets second baseman doubled to complete the Mets scoring, and Jones, after toweling himself off, returned to the mound.

Jones retired the last 13 batters he faced to complete his masterpiece. After Bonds flied out to center fielder Jay Payton for his team’s last out, the celebration began.

In the Giants’ clubhouse, manager Dusty Baker said, “He was changing speeds and getting strike one and had the ‘atem’ ball working pretty good. We just couldn’t find any holes. We had a couple of near home runs. First inning, we hit three bullets.”5

The Mets went on to defeat the Cardinals in the NLCS and advanced to the World Series against the Yankees in New York’s first Subway Series since 1956, losing to their crosstown rivals in five games.

Jones had starts in both the NLCS and World Series, but he did not come close to matching his performance against the Giants. In the NLCS, he started the fourth game but left in the fifth inning. His mates had staked him to an 8-3 lead, but after the first three batters reached base and the Cardinals cut the lead to 8-4, he was removed from the game. The Mets went on to win 10-6. In the World Series, Jones started the fourth game and left after five innings with the Mets trailing 3-2. There was no further scoring in the game, and Jones was tagged with the loss.

In the partying in the clubhouse after Jones’s masterpiece, his 4-year-old son, perched atop the shoulders of teammate Ventura, doused his dad with champagne, prompting Jones to say, “After I went through in the beginning of the season, to battle back and do something in the postseason – it meant a lot.”6