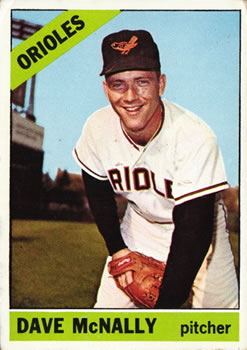 The Los Angeles Dodgers entered Game One of the 1966 World Series against the Baltimore Orioles on October 5 as 8-to-5 favorites.1 They had swept the New York Yankees in 1963 and had defeated the Minnesota Twins in seven games the previous season, so it was understandable that the oddsmakers predicted a third title in four years. However, as they entered Game Four on October 9, the Dodgers had not scored in the past 24 innings of play and were facing the prospect of being on the wrong side of a quick and ignominious sweep. Frank Robinson, Baltimore’s Triple Crown-winning outfielder, had hoped that the Dodgers would emerge as the National League champs because, he said, “We always feel we’re good for three or four runs, and against the Dodgers, that could be enough.”2 After Game Four, Los Angeles Examiner columnist Mel Durslag would comment drily, “Enough, he [Robinson] obviously meant, for a whole Series.”3

Dave McNally, who had allowed the Dodgers’ only two runs of the Series, took the mound determined to atone for his 2⅓-inning stint in Game One. He had tough acts to follow as Moe Drabowsky, his Game One reliever, had hurled 6⅔ scoreless innings that were followed by Jim Palmer’s 6-0 blanking of LA in Game Two and Wally Bunker’s 1-0 whitewashing in Game Three. McNally came out inspired and threw the Orioles’ third consecutive shutout, a 1-0 game that “was virtually a carbon copy of the October 8 triumph.”4 In Game Three, Paul Blair had hit the winning home run in support of Bunker; in this game it was Frank Robinson whose solo blast provided the winning margin. After McNally’s gem, the Baltimore pitching staff had a new World Series record of 33 consecutive scoreless innings that surpassed the old mark of 28 set by the New York Giants against the Philadelphia Athletics in 1905.

A partisan crowd of 54,458 fans filled Memorial Stadium in hopes of witnessing history in the making in the form of Baltimore’s first major-league championship since 1897.5 Orioles fans were so confident that before the start of the game, a group of them displayed a sign that read, “Support the Dodgers – Give Blood.”6 Although the placard was directed at the Dodgers’ hitters, starting pitcher Don Drysdale, who had been tagged for four runs in Game One, also had appeared as though he could use a transfusion. On this day, however, he pitched more like his usual self, with the exception of one mistake thrown to Robinson. In the 1-0 duel, which was played in a crisp 1 hour and 45 minutes, true action was limited to only a handful of plays, a theme that was in keeping with a World Series in which the winning team batted .200 and the losers a record-low .142.

In the bottom of the second inning, Drysdale allowed a leadoff single to Brooks Robinson and issued a one-out walk to Curt Blefary, but he escaped trouble when Davey Johnson grounded into a double play. McNally, for his part, allowed only a walk and a single through the first four innings. In the bottom of the fourth, Frank Robinson woke both teams and the fans out of their slumbers when he belted one of Drysdale’s pitches into the left-field stands for what would be the lone run of the game. Drysdale later said, “It was a fastball up high. I knew the moment he hit the ball, it would take a guy with a ticket to catch it.”7 Although Drysdale’s attitude was not as blasé as it may appear in print, columnist Jim Murray gave the Dodgers’ star hurler no quarter when he wrote, “Don Drysdale, who used to knock Frank Robinson down regularly when he was in the National League, apparently didn’t recognize him. For the second time in the Series, he put a ball over the plate that he might better have put over his head. Robinson put it over the wall.”8

After Brooks Robinson grounded out, Boog Powell sent another Drysdale pitch over the wall, but Dodgers center fielder Willie Davis – the goat of Game Two when he had committed three errors in a single inning – made what one reporter called “the top defensive play of the series” when he “actually pulled the ball back from homer territory with a mighty leap and a one-handed stab.”9

In the top of the fifth, Dodgers second baseman Jim Lefebvre led off with a line-drive single to left. Wes Parker came to bat and hit a ball that looked as though it could go through the hole on the left side for a hit, but third baseman Brooks Robinson – displaying the defensive acumen that would garner him the nickname “Human Vacuum Cleaner” – deftly scooped it up and started a 5-4-3 double play.

From that point forward, things were relatively quiet again until Lefebvre led off the top of the eighth inning with a long fly ball to center. Orioles center fielder Blair showed why manager Hank Bauer had just sent him into the game as a defensive replacement as he “leaped at the fence near dead-center for a two-handed catch of Lefebvre’s bid for a game-tying homer.”10 After Drysdale set the Orioles down in order in the bottom of the eighth, it was up to McNally to complete the shutout and the Series sweep.

McNally started the ninth in style by striking out Dick Stuart, who was pinch-hitting for John Kennedy, but then he ran into danger. Al Ferrara, pinch-hitting for Drysdale, singled to center and Maury Wills worked a walk to put the tying run in scoring position. Davis came up and hit a hard liner right to Frank Robinson in right field, and the Dodgers were down to their last out in the person of Lou Johnson. After flailing at McNally’s first two offerings, Johnson lofted a routine fly ball to Blair that put the Dodgers out of their misery and set off celebrations throughout Charm City.

Although most of the attention centered on the performance turned in by Baltimore’s pitching staff, Frank Robinson garnered the Series’ MVP award on the strength of his .286 batting line that included two homers and a Series-leading three RBIs. The low-key Robinson, who was in the middle of a Hall of Fame career, was happy enough on this occasion to say, “I think it was the best season I ever had by far.”11

As for the Dodgers, it was the worst World Series ever played by any team. In addition to the record-setting 33 scoreless innings and .142 team batting average, they also set all-time Series lows for fewest runs (2), fewest RBIs (2), and fewest hits (17).12 Interestingly, the previous records for fewest runs (4) and fewest hits (22) had belonged to the 1963 New Yankees, leading Dodgers manager Walter Alston to observe, “Now I know how the Yankees felt when we beat them four straight in ’63.”13 When Alston was asked if the Dodgers needed to trade for power hitters in the offseason, he downplayed such a need and defended his team, saying: “We’ve known we’ve lacked power for two years. We’re not going to rush out and make a lot of trades because we lost four straight in the Series. We’re not known as a power club, but this team doesn’t have much to be ashamed of. They won two straight pennants.”14

Wills echoed his manager when he confessed about the Dodgers, “We never scared anybody in our league, anyway. Most of the clubs in the National League didn’t have much respect for us. You’d hear players calling us minor leaguers and saying things like, ‘Watching the Dodger offense is like watching a silent movie.’”15 After the Series, not only did NL opponents disparage the Dodgers, but the LA press piled on, stating, “[T]hey still propose to go to Japan the middle of this month. As we understand it, it will be a five-week trip, unless, of course, they blow it in four.”16

While the Dodgers were having their epitaph written in Los Angeles, the Orioles were being feted in their hometown. The Baltimore Sun aptly summed up baseball’s newest champions:

In L.A., the only question was not whether the Dodgers would win, but how many games it would take them.

That’s all changed now. Not once in this entire series did the Birds trail, nor did they commit a single error. Both Palmer and Bunker surpassed Waite Hoyt as the youngest men ever to pitch World Series shutouts. The record belongs to Palmer now, because he’s 20 and Bunker 21. …

But, as it was all year, this was no one, or two man job. For a young team, playing in its first World Series, this one performed faultlessly.17

It was the beginning of a golden age for Baltimore baseball: The team would compete in three consecutive World Series from 1969 to 1971 and capture a second championship in 1970.

5 The first incarnation of the Baltimore Orioles belonged to the National League. Between 1894 and 1897, the team competed for the Temple Cup championship every year, losing the first two and winning the latter two; their final championship was a five-game series victory over the Boston Beaneaters in 1897. In 1899 the National League contracted from 12 teams to eight with the Baltimore franchise being one of the four that was eliminated. Baltimore briefly had major-league baseball again in 1901-1902 when the reorganized Orioles joined the upstart American League; however, this team, which became the New York Yankees, won no championships. After that, Baltimore was a minor-league city until the hapless St. Louis Browns moved to town and became the current incarnation of the Orioles.

13 W. Lawrence Null, “Walt Alston Not Planning to Jump Off Any Bridges,” Baltimore Sun, October 10, 1966: 29. It should be noted that the 1963 Yankees actually shared the record for fewest hits with the 1914 Philadelphia Athletics.