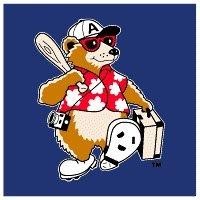 As one of the more venerable franchises in minor-league baseball, the Asheville (North Carolina) Tourists were just short of a century of existence in 2014—“the name was first used in 1915 to pay homage to the city’s destination status.”1 “Asheville, beginning in the early 1890s, became a big tourist destination. That’s always been the No. 1 industry. Lots of big hotels were built in the 1890s. Tourism has always been a big part of Asheville’s history.”2

Over the years the Tourists have played in several leagues and at every classification from D to Double A, starting with the Class D North Carolina State League in 1915. But by 1980, after four years in the Low-A Western Carolinas League, the Tourists settled into a slot in the reorganized Low-A South Atlantic (Sally) League, where they competed through the 2019 season.3

Under manager Tom Spencer, the 1984 Tourists won their first title in the most recent iteration of the Sally League with a three-game sweep of the Charleston (South Carolina) Royals in the championship round of the playoffs.4 A 28-year title drought ensued until the 2012 club, managed by Joe Mikulik and paced by future Rockies All-Star Trevor Story,5 dispatched the Greensboro Grasshoppers, a Miami Marlins affiliate, in the playoff finals, 3-1.6

By 2013 Story was gone to Colorado’s High-A affiliate in Modesto, California, and Mikulik was no longer with the Tourists—out of baseball, but only for a year.7 Fred Ocasio came on as the new manager. With most of Story’s teammates also promoted, Asheville slipped to 10 games under .500 and a sixth-place finish in 2013.

But reinforced with a talented core moving up from the lower rungs of the Rockies’ system, Ocasio’s 2014 Tourists finished 89-49, won 26 more games than the 2013 team, and rolled into the playoffs as road warriors. They were 46-23 away from home, including 27-7 in the second half of the split season. Asheville won 16 consecutive road games at one point in the second half and went 39 games between road losses. “I can’t really explain it, except we’re just a good ballclub that’s comfortable playing baseball anywhere, [although] that road streak was pretty incredible,” Ocasio told writers.8

Asheville swept the Savannah (Georgia) Sand Gnats, a Mets affiliate, in the best-of-three divisional series and faced the Nationals’ Hagerstown (Maryland) Suns in the best-of-five championship series. The Tourists got off to a solid offensive start in the first game at their home ballpark, McCormick Field,9 on Monday, September 8, rapping out a season-high 23 hits in whipping Hagerstown, 16-7.10

The Suns came back to even the series a night later. With the home-park advantage now going to Hagerstown for the rest of the series, Ocasio wasn’t fazed: “Hagerstown’s a good team and they play tough at home, but our guys will go up there confident because of the way we’ve played all year.”11

After a Wednesday travel day, Asheville continued its road magic at Hagerstown, winning 4-1 on Thursday to put the Suns’ backs against the wall. In the potential closeout game on Friday, Hagerstown faced Asheville’s regular-season ace, Antonio Senzatela (15-2, 3.11 ERA). The Suns dug in to win, 6-3.12 That set up a winner-take-all final on Saturday night, September 13.

The Suns had not drawn particularly well at 4,600-capacity Municipal Stadium during the 2014 season. They averaged a paid attendance of 881 per game, but nearly doubled that with 1,557 fans for Saturday’s decisive fifth game.13 The pitching matchup was the same as in the first game on Monday night in Asheville. Suns manager Patrick Anderson tabbed 6-foot-5 Canadian righty Nick Pivetta, his rotation ace. Ocasio countered with his own lanky right-hander, 6-foot-3 Konner Wade, 8-8 in 25 starts for the regular season, but victorious over the hard-hit Pivetta in the series opener.

Although he had excellent run support in the series opener, Wade had pitched as if in a scoreless game. Over five shutout innings, he had scattered three hits without a walk and struck out six. His relievers had given up all seven Hagerstown runs over the remaining three innings, but Asheville had still coasted comfortably.

Wade was just as sharp in the final, shutting down Hagerstown in the first inning after Tourists cleanup hitter Corelle Prime had singled in Ryan McMahon in the top of the inning to give Asheville an early 1-0 edge against Pivetta. As Wade continued to dominate the Suns hitters through the second and third innings, Asheville’s designated hitter Raimel Tapia hit a solo home run in the top of the third to pad the lead to 2-0. Pivetta’s throwing error in the fourth played a part in two more Asheville runs—one unearned—on Zach Osborne’s timely double.14

Now with a 4-0 lead, Wade continued to cruise through the Hagerstown hitters. After seven scoreless innings, over which he gave up five hits and struck out six without walking a batter, Wade gave way to setup man Troy Neiman for the Hagerstown eighth.

The Suns broke through for an unearned run—their only tally of the game—and with two outs, Ocasio called on lefty closer Trent Daniel.15 Daniel nailed down the title win for the Tourists and Wade with 1⅓ innings of scoreless relief.16

Ocasio recognized the managerial luxury this afforded. “That’s the thing,” he said. “Having the team I had this year, with all the prospects, putting their names in the lineup every day is easy. When you’ve got guys like that in the lineup, you’re always going to have a chance.”18

Ocasio was gone in 2015, replaced at the helm by Warren Schaeffer.19 But the Tourists stayed hot and made another title run. They nipped Savannah again in the first round of the playoffs and advanced to the championship series against the Hickory (North Carolina) Crawdads, an affiliate of the Texas Rangers. But the dream of three titles in four seasons ended as Hickory swept them, three games to none.

In addition to the sources cited in the Notes, I used the Baseball-Reference.com and Retrosheet.org websites for general information. I also used the B-R Minor League Encyclopedia for data on the 2014 Asheville Tourists and 2014 Hagerstown Suns. I found the Stats Crew.com website a useful resource for minor-league baseball, especially season summaries. Minor League Baseball.com is a useful source for more recent minor-league coverage, especially player logs and regular and postseason box scores. In addition, the excellent day-to-day coverage of the Tourists by the Asheville Citizen-Times, accessed through Newspapers.com, was vital to this account.

3 At the insistence of the Baltimore parent club, Asheville, then in the Double-A Southern Association, played the 1972 through 1975 seasons as the Asheville Orioles. Since 1976 and through affiliations with the Texas Rangers (1976-81), the Houston Astros (1982-93), and Colorado Rockies (1994-2019), the Tourists returned to the classic name and played in the South Atlantic League. As a result of Minor League Baseball’s reorganization in 2021, several SAL teams, including the Asheville Tourists, will play in the new High-A East. No longer affiliated with the Rockies, the 2021 Tourists will once again be affiliated with the Astros.

4 1984 Asheville Tourists, Stats Crew.com, https://www.statscrew.com/minorbaseball/stats/t-at10205/y-1984, accessed February 25, 2021. The Sally League used a divisional two-half playoff system in which the first-place teams in each half in each division played the second-half winners in a best-of-three series to determine division champions. If the same team won both half-seasons, the team with the next-best record in the division played in the divisional series. The divisional winners then played a best-of-five-games championship series.

5 Mikulik had made national news as Asheville’s manager in June 2006 with an umpire protest rant in a game at Lexington, Kentucky. Associated Press, “Swing and Miss at Anger Management,” Minneapolis Star Tribune, June 27, 2006: C7. Story and photos (bottom of page): https://www.newspapers.com/image/250348105/?terms=mikulik%2C%20minneapolis%20star%20tribune&match=1.

9 McCormick Field, “deemed a diamond in every sense of the word,” was built in 1924 and, after several modernization renovations, remained in use as of 2021 as one of the oldest ballparks in the minors. The first game in the ballpark’s history was played on April 3, 1924, when the local team – then known as the Skylanders – defeated the Detroit Tigers, enroute north after spring training, 18-14. Detroit’s Ty Cobb hit the first home run in the new ballpark. In the days of train travel, many major-league clubs made spring stops in Asheville for exhibition games. In 1925 Babe Ruth, who had been ill most of the winter, collapsed as he left the train in Asheville, and reports that he had died circulated nationally. The incident became known as “The Bellyache Heard ’Round the World.” Ruth recovered but had a subpar season in 1925. He was back in Asheville again in 1926, when he “stood in the outfield, smelled the honeysuckle, and said, ‘My, my, what a beautiful place to play.’” Back again in 1931, Ruth and Lou Gehrig both hit home runs in a McCormick Field exhibition game. Bill Ballew, Baseball in Asheville (Charleston, South Carolina: Arcadia Publishing, 2004), 15, 16, 18. Today the ballpark concourse displays life-size posters of the Ruth-era Yankees and other noted major leaguers who played there over the years, as well as posters of members of past Tourists teams who have progressed to the majors.  Author’s personal observations from numerous trips to McCormick Field, 2005-19.

12 Senzatela, a native of Venezuela who signed as a free agent in 2012, was 19 years old in 2014. His .882 winning percentage was second among rotation starters in the 2014 Sally League. The September 12 game was his first start in the championship series. He surrendered two runs on six hits through 5⅓ innings and left with the lead, but four late runs, three of them unearned, given up by the Asheville bullpen were the difference.

13 By comparison, Asheville averaged slightly over 2,500 attendance per game in 4,000-capacity McCormick Field.  The Tourists averaged 2,260 fans for the two 2014 championship series games in Asheville, played on Monday and Tuesday nights.

15 Daniel was second in the 2014 Sally League with 15 saves and added two more in the playoffs. He appeared in a league-high 53 games during the regular season.

16 Pivetta took the loss, his second of the series. Drafted in 2013 by the Nationals, he reached the majors in 2017 with the Phillies. Through 2019, the minors’ most recent season when Wade was with the Baltimore Orioles’ organization, he had not yet appeared in the majors.

19 Ocasio remained in the Colorado organization, moving up a notch with many of the 2014 Tourists to the Rockies’ High-A affiliate in the California League, the Modesto Nuts.