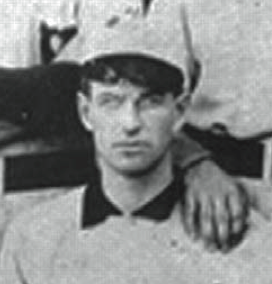 It was a “Ladies Day,” but there were few ladies—or gentlemen, for that matter—present on September 16, 1899, when the Washington Senators beat the visiting Cleveland Spiders in a sloppy 15-10 game. Only 400 fans came to Washington’s Boundary Field to see Cleveland put up an eightrun inning and hold a seven-run lead yet still lose for the 24th time in a row. That’s the National League record, and the 1899 Spiders are still the uncontested worst team to ever play in one of the existing major leagues.

The Spiders were a victim of syndicate ownership, a system prevalent in the late 1890s through which the same people owned two teams. Miffed by the failure of city leaders to permit them to play Sunday baseball in Cleveland, brothers Stanley and Frank Robison bought the St. Louis team in March 1899, and moved their best players there. Cy Young, Jesse Burkett, and others vanished in exchange for a collection of second-stringers. The result was a 20–134 record that would have placed the Spiders 12 games behind the 1962 New York Mets, one of the worst teams of the 20th century. In addition to the record 24-game losing streak, the Spiders remain the only team with six different losing streaks of 10 games or more; and the only team to lose 40 out of 41 consecutive games. Scrappy Bill Joyce was slated to manage Cleveland but, in the prime of his career, walked away from baseball instead.

The “Misfits,” as they were called, lost 10–1 on Opening Day, April 15, and grabbed last place for good on May 3 with a 3–10 record. Fans stopped coming to games, and players stopped trying to win. Stanley Robison moved the last two players of merit, Lave Cross and Willie Sudhoff, to St. Louis and begged the National League to permit his team to finish its schedule on the road. Only New York and Boston refused, thinking their teams could draw fans anywhere. They were wrong. Two hundred fans watched Cleveland beat New York on August 25, during a home series that ended Cleveland’s record 50-game road trip. Then the losing streak began.

The Spiders were outscored 209–65 during the streak, and there were few heartbreaking losses among the 24 games. The game-losing run in 10 losses came in the first inning. Loss number 14 was the only one with late-inning drama. Cleveland’s big right-hander Charlie Knepper had a 6–4 lead with three outs to go in Chicago. He hit opposing pitcher Jack Taylor with a pitch, got two quick outs, and gave up singles to Bill Everitt and Sam Mertes. With the Spiders still leading by a run, Chicago’s Bill Bradley seemed to end the game with a chopper that shortstop Harry Lochhead scooped up. But first baseman Tommy Tucker dropped the ball and failed to find it until Everitt and Mertes had scored. The frustrated Tucker, once an American Association batting champion, was released a few days later.

The next season was the one in which the modern “visiting-team-bats-first” convention gained favor, so the September 16, 1899, game was one of the last in which the home team chose to bat first. Washington scored a run that first half-inning when center fielder Jimmy Slagle singled, Win Mercer—a pitcher trying to become a third baseman—walked, and outfielder Buck Freeman singled home Slagle.

Cleveland’s eight-run bottom of the second began with the major-league debut at bat of Otto Krueger: a ground-ball single to shortstop off aging utilityman Jimmy Stafford’s glove. The floodgates opened. Jim Duncan singled. Harry Lochhead bunted poorly back to the mound, but pitcher Jack Fifield thought he heard someone yell “Third base!” and threw there although Krueger was already safe. Bases loaded.

Lew McAllister seemed to hit into a double play, but Stafford dropped the toss at second base for an error. Pitcher Charlie Knepper walked with the bases loaded for another run, and Harry Colliflower, a pitcher filling in for center fielder Tommy Dowd, who had a fever, ripped a two-run single up the middle. Cleveland 4, Washington 1. Dick Harley beat out a bunt. After one out, Charlie Hemphill singled for two runs when center fielder Slagle threw in wild for an error. Another out later, Jim Duncan singled and two runs scored when Buck Freeman threw in wild for an error. The Misfits had put together the eight runs on six hits and three errors.

Washington countered right away with four in the third inning aided by three straight bunts against the inept Cleveland infield. Washington’s Jack Fifield went on to pitch four perfect innings while the Senators continued to chip away. Three two-out singles in the fifth put Washington down by two. In the eighth Slagle led off with another bunt single, advanced on a groundout, and scored to make it 8-7 on Jack O’Brien’s single. Knepper was getting tired, but relief pitching was not a popular idea in the 19th century. Dan McGann singled and Buck Freeman doubled both runners home to put Washington in front. By inning’s end, the Spiders trailed 11-8.

Although the Spiders appeared doomed to another loss, they rallied. Hemphill tripled in a run in the bottom of the seventh, and Colliflower singled in a run in the bottom of the eighth. That made it Washington 11, Cleveland 10. The Misfits seemed on their way to tying the game in the eighth when Lew McAllister broke an 0-for-19 slump with a single, but Freeman gunned out Duncan at the plate with a beautiful throw. Freeman added a run-scoring triple in the top of the ninth, and Shad Barry applied the finishing touches to the score with a rattling inside-the-park home run that gave him six RBIs for the day.

Cleveland manager-second baseman Joe Quinn, Hemphill, and Krueger went out in order in the bottom of the inning to make the 24th consecutive loss complete. The winning pitcher Jack Fifield, never got another major-league victory.

Sunday was an off-day. On Monday Cleveland took the third game of the series to snap its string of losses. Jack Harper, in his major-league debut, beat journeyman Bill Magee, 5-4, in ten innings. Tommy Dowd, back in the lineup, doubled in the last frame and scored on a Charlie Hemphill single. That raised Cleveland’s win total to 20 for the season.

The loss gave Magee, who had already lost to the Misfits while pitching for the Louisvilles and Phillies, an unlikely distinction. For three different clubs he had been defeated by the worst team ever.

Frank Vaccaro served as researcher and fact-checker on this essay. 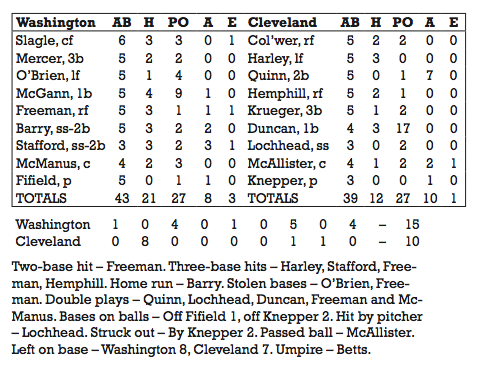