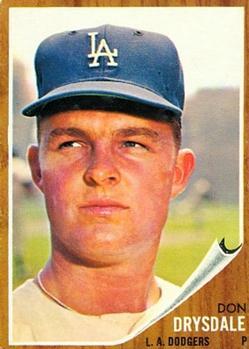 Don Drysdale’s 25th and final victory of the 1962 season happened in enemy territory.

It was an impressive afternoon for the Los Angeles Dodgers right-hander with the power of a panther: five hits, nine strikeouts, eight men stranded on base in the 4-0 shutout of the Milwaukee Braves at County Stadium.

Maury Wills ignited the LA ballclub with a 2-for-3 output and two runs scored. His first-inning trek around the bases occurred thanks to hitting a leadoff single; thieving the 94th of his record-setting 104 bases in 1962; advancing to third on Jim Gilliam’s bunt single; and scoring on Tommy Davis’s double-play grounder.

Bob Hendley ended the inning with a strikeout of Frank Howard, the first of six for the Braves southpaw. This was no easy task: Howard had the third-highest batting average on the ’62 Dodgers (.296, 141 games).

Drysdale began his quest for number 25 with strikeouts of Braves sluggers Hank Aaron and Joe Adcock in the bottom of the first; Lee Maye struck out an inning later.

Hendley dispatched the Dodgers in three-up, three-down fashion in the top of the second inning, including his first of six strikeouts—first baseman Lee Walls.

After Willie Davis led the top of the third with a grounder to Milwaukee second baseman Frank Bolling, the Dodgers scored two runs on a bases-loaded situation. Drysdale followed Davis with a walk; Wills got his second hit of the game; and Gilliam drew another walk.

When Tommy Davis had a bat in his hand with a teammate on base, it became as expected for him to knock in a run as it was to think about surfing every time a Beach Boys song came on the radio.1 Davis led the majors in RBIs (153) and hits (230) in 1962. His single scored Drysdale and Wills, giving him three RBIs for the day and a new Dodgers record; Campanella had led the National League with 142 in 1953. (Wills’s run in the first did not add to Davis’s RBI total because runs scored on double-play grounders are not credited as RBIs.)

Gilliam moved into scoring position at second base; Hendley stopped the LA offense with Howard’s fly out and Walls’ second strikeout.

Drysdale added a “K” to his ledger when he struck out Eddie Mathews in the bottom of the third and another an inning later when Adcock struck out for the second time in the game. In the top of the fourth, Doug Camilli drew a one-out walk. Willie Davis’s double-play groundout kept the Dodgers in check.

Milwaukee got a break in the bottom of the fifth; Drysdale gave up a two-out single to his pitching counterpart and then plunked Denis Menke. Mathews approached the batter’s box with a gold-standard combination of patience, discipline, and visual acumen: He had led the National League in walks in 1961 and would do so again by the end of the ’62 season.2

A walk would load the bases for Hank Aaron, a .323 hitter with a .618 slugging percentage in 1962. Dodgers fans exhaled gusts of relief when Mathews grounded to Tommy Davis for the third out.

Like Adcock, Maye was a dual strikeout entry for Drysdale with his sixth-inning whiff.

Ethan Blackaby, pinch-hitting for Hendley, struck out in the bottom of the seventh

Milwaukee manager Birdie Tebbetts called to the bullpen for lefty Jack Curtis to start the top of the eighth; Curtis retired Wills and Gilliam on fly outs to the outfield and Tommy Davis on a grounder to Mathews.

Dodgers skipper Walter Alston shifted the defense when his squad took the County Stadium field for the bottom of the eighth. Second baseman Gilliam took over defensive duties at third base; Tommy Davis moved from third to left field. Larry Burright replaced Gilliam at second; John Roseboro gave Camilli a breather behind the plate.

Hank Aaron and his brother, Tommie Aaron, became Drysdale’s eighth and ninth “K” tallies when they struck out looking.

Howard’s solo shot—his 30th of the season—brought the score to 4-0 in the top of the ninth.

Walls struck out for the third time, but excitement revived when Roseboro singled and stole second base on Torre’s throw to shortstop Menke. It looked like a scoring threat; confusion followed. Roseboro thought he got called out, so he headed to the visitors dugout on the left side of the field; Menke tossed to Mathews who tagged Roseboro out.

The Dodgers had more defensive changes in the bottom of the ninth. Ron Fairly relieved Howard in right field. Tim Harkness did the same for Walls at first base.

Drysdale preserved his shutout with two infield grounders and a fly ball to the outfield.

Alston analyzed the Dodger ace’s pitching mechanics after the victory and acknowledged Joe Becker, the team’s pitching coach. “Don’s throwing a little bit more from the top and it has helped every pitch. He gets a little more wrist into his pitches. His fastball is livelier, his sinker ball sinks more and the curve breaks better.”3

Wills fielded questions about breaking Ty Cobb’s record of 96 steals in a season.

Although it was a prominent matter, Wills had another priority. “Sure, I’m thinking about it, but I’m more interested in us clinching the pennant.”4 Wills’s mark of 104 thefts stood until Lou Brock set a new record with 118 in 1974. Rickey Henderson exceeded that mark with 130 steals in 1982.

The Braves had won seven of their last eight before the loss to Drysdale, Wills, et al. They went 6-2 for the remainder of the season, ending with an 86-76 record.

Drysdale pitched four more games in 1962; his record was 0-2 with two no-decisions. He finished the season at 25-7 and won the Cy Young Award. Los Angeles was 7-3 in the 10 games before this contest, but 3-9 for the remaining games.

At the end of the season, it seemed like déjà vu when they tied the Giants, forcing a three-game playoff between the NL rivals. In 1951 a similar playoff culminated with Bobby Thomson’s three-run homer against Ralph Branca to win the third game in the bottom of the ninth inning.

The Dodgers lost this playoff, too, which set up the Giants for an epic seven-game World Series against the Yankees. The sons of San Francisco lost to the Bronx Bombers, who had also won the ’51 series.

2 Mathews also led the major leagues in walks in 1963.