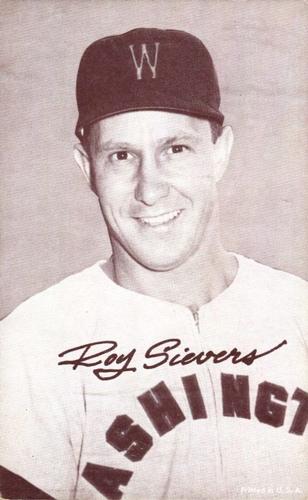 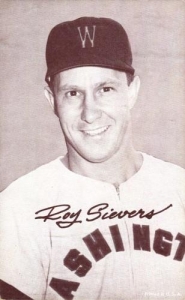 Obviously, the Detroit scribes were miffed that the Tigers were soundly beaten by the Senators the day before, and to make matters worse, were swept in a three-game series in September, just as they had been in July. Tigers hurlers were racked for 18 hits in the massacre, three by Roy Sievers and three by All-Star Mickey Vernon. Sievers in particular hustled hard all season to show owner Clark Griffith and manager Bucky Harris that their new faith in him was not unfounded.

“Getting traded to Washington was the best thing that ever happened to me,” Sievers said in an interview. “Saved my career!”2

After a fine 1949 Rookie of the Year season with the St. Louis Browns (.306 BA/16 HR/91 RBIs,) Sievers fell victim to a sophomore slump in 1950, hitting an anemic .238 with 10 homers and 57 RBIs. The slump continued into the 1951 campaign, so much so that he was sent down to the San Antonio Missions of the Texas League for “seasoning.” It was there on August 1 that he laid out to catch a low line drive, severely dislocating his right shoulder. Out for the rest of the season, Sievers tried rehabbing on his own, only to dislocate it again in spring training of 1952. Bill Veeck, the Browns new owner, arranged for Sievers to have a very experimental operation to fix the ailing shoulder. He wasn’t 100 percent in 1953 but managed a respectable .270 average with 8 homers and 35 RBIs in 92 games, basically hitting with one arm.3

Strapped for cash, Veeck was forced to sell the Browns and they moved to Baltimore in 1954. Word of Sievers’ busted wing, however, found its way into the hands of Baltimore manager Jimmy Dykes. Considering him “damaged goods,” Baltimore traded Sievers to the Senators for Gil Coan. It turned out to be one of Clark Griffith’s better trades.4

“When I come up to Washington, I asked [manager] Bucky Harris, ‘Where am I gonna play?’ I told him I still couldn’t throw too good, so’s I couldn’t play the outfield. He just said, ‘You get rid of the ball quick as you can. I need your bat in the lineup.’ So he put me in left field. Back then, I would just kind of loop the ball to the shortstop best as I could.”5

Nose to the grindstone, Sievers worked diligently to strengthen his arm, under the watchful eye of team doctor George Resta and trainer George “Doc” Lentz. His arm and bat showed great improvement. Playing nearly every game of the 1954 season, Sievers regained most of his power. Although his .232 batting average was subpar by his standards, he still managed 102 RBIs and hit 24 home runs into Griffith Stadium’s cavernous 388-foot power alley in left field. He was named Comeback Player of the Year by The Sporting News.6

On September 2 a meager gathering of 1,260 stalwart Senators fans twirled the Griffith Stadium turnstiles on a balmy, 80-degree Thursday afternoon to watch their Nats make history against the Tigers in the last of a three-game set. If the Senators had a patsy for the year, it was surely the Tigers: They beat Detroit 13 out of their 22 games. Led by veteran two-time AL batting champion Mickey Vernon, Eddie “The Walking Man” Yost, and Sievers, the ’54 Senators were a competitive team, despite ending up in sixth place, two games behind the Tigers.

The Senators’ Bob Porterfield faced off against the Tigers’ Ned Garver. Garver had his career year in 1951, going 20-12 for the hapless St. Louis Browns, where he teamed up with a very young Roy Sievers. Porterfield was coming off of a 22-10 season for the 1953 Senators.

In the bottom of the inning, Yost drew a leadoff walk. Jim Busby flied out, then Vernon singled Yost to third. Sievers, hurting his former Browns teammate Garver, doubled Vernon and Yost home.

The second inning and the top of the third were harmless for Garver and Porterfield. The Senators half of the third was massive. After Yost and Busby singled, Vernon walked to fill the bases. Sievers’ double to center field cleared the bases and chased his pal Garver off the mound. Reliever Billy Hoeft fared no better, giving up a triple to Jim Lemon, scoring Sievers, and a double to Ed Fitz Gerald, scoring Lemon, before retiring the side with the Senators ahead 7-1.

The Tigers got two back in the top of the fourth with a triple by Chick King and a single by Hoeft. The Nats responded in kind in the bottom of the inning. Busby led off with his seventh homer of the year and Vernon singled. Sievers chased Hoeft with his 23rd home run of the season. Reliever Dick Marlowe gave up three hits and another run before retiring the side. The Senators were up 11-3.

Other than Fred Hatfield’s single, the fifth inning was pretty much three up-three down for both sides. The Tigers plated a run in the sixth, making the score 11-4. In the bottom of the seventh, Yost singled Jerry Snyder home from second. Jim Busby reached on an error and Mickey Vernon cleared the bases with his 19th homer of the season, setting a team record for left-handed hitters, besting the likes of Goose Goslin, Stan Spence and Eddie Robinson. The Senators now led 15-4.

The Tigers went quietly in the eighth. The Senators plated one more in the eighth when Jerry Snyder singled to score Fitz Gerald. Porterfield gave up four hits and two runs in the top of the ninth, but finished the Senators’ 16-6 victory. Sievers ended his day with three hits, seven RBIs, and eight total bases.8

From 1954 through 1959, Sievers’ prodigious home runs made him the Senatotrs’ biggest gate attraction since Walter Johnson, increased attendance by over 40 percent, and forced the forever parsimonious Calvin Griffith to rethink a proposed move to Los Angeles or Minnesota in 1957.

9 Sievers was traded to the White Sox in 1960 and also played for the Phillies. The Senators reacquired him in 1964 and he hit four more home runs, making his total with the team 184.