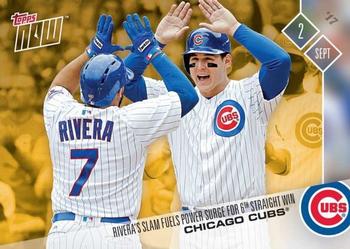 Since the All-Star break, the 2017 Chicago Cubs’ offense had been clicking. The Cubs had won 31 of 46 games while leading the majors with 292 runs — including seven games of 10 runs or more. Four times in August they scored at least 15, the first time a Cubs team had done that in a month since 1930.1

A Saturday-afternoon crowd of 41,329 at Wrigley Field celebrated the start of the Labor Day weekend on September 2 by watching another double-digit output and a big Cubs lead after six innings — followed by a parade of six pitchers in the final three innings to secure a 14-12 win over the Atlanta Braves.

The Cubs had ended their 108-year World Series drought the previous October with a thrilling victory over the Cleveland Indians in seven games. Now they looked to defend their title. After being two games under .500 on July 9, they won 10 of 12 to take over the lead in the NL Central on July 26 and had stayed there ever since.

Cubs first baseman Anthony Rizzo explained: “We have a good young team that has picked up a lot of experience the last two years, and we know our season isn’t made or broken any single month, especially early on. We’re playing loose right now, and it’s fun to see.”2

Chicago had won the first five games of its current seven-game homestand, including a 2-0 win over the Braves the previous day in the opener of a three-game series. With a record of 74-60, the Cubs were 3½ games up on Milwaukee. Atlanta was in third place in the NL East, 21½ games behind first-place Washington, with a mark of 59-74.

Jon Lester (8-7, 4.37) took the mound for the Cubs, making his first start since August 17 due to shoulder tightness that had forced him to the disabled list. Atlanta countered with 23-year-old rookie Lucas Sims; he was 2-4 in six starts with a 4.41 ERA since his debut on August 1.

Lester struggled in the first inning. The Braves loaded the bases with a leadoff single by Ender Inciarte, a walk to Ozzie Albies and a one-out single to center by Matt Kemp. But Lester struck out Nick Markakis and got Kurt Suzuki to foul out to catcher Rene Rivera to end the threat.

Sims set the Cubs down in order in the first but ran into trouble in the second. Rizzo led off with a single and Ben Zobrist walked. One out later, Jason Heyward walked to load the bases. Rivera gave the Cubs a 4-0 lead when he hooked an 0-and-2 curveball off the foul pole in left for his first career grand slam.

Rivera’s home-run ball ended up in the possession of a 90-year-old fan who had dived to come up with the prize.3 After the game, Rivera showed off the ball, saying, “He wanted to give it to me. He used to play baseball back in the day.”4

The Braves cut the lead to 4-3 in the third. It took just three pitches: Albies singled with one out and Freddie Freeman and Kemp followed with first-pitch homers. Markakis doubled down the left-field line to put the tying run in scoring position, but Jon Jay made a diving catch of Dansby Swanson’s sinking liner5 to center for the third out.

With two out in the third, Javier Baez’s solo homer made the score 5-3. Rio Ruiz’s home run to start the fourth for Atlanta immediately cut the Cubs’ lead back to one.

The Cubs appeared to blow the game open in the bottom of the fourth. Sims walked Lester and gave up a single to Jay. Ian Krol relieved Sims and walked Kyle Schwarber to fill the bases. One out later, Rizzo cleared them with a triple to center.

The three RBIs pushed Rizzo’s season total to 100, and he joined Hack Wilson, Billy Williams, and Sammy Sosa as the only Cubs with three seasons of 30 homers, 30 doubles, and 100 RBIs.6

“It is something I want to continue to do year-in and year-out,” Rizzo said after the game. “If you do it one year, you want to do it again. You want to prove yourself. That’s the name of this game. You’ve got to keep proving yourself.”7

With two outs, a double by Baez and a single by Heyward plated two more runs to make the score 10-4.

After a perfect fifth, Lester was removed for a pinch-hitter. Hector Rondon entered for the sixth and allowed a leadoff single to start the sixth but struck out the next three Braves.

The Cubs manufactured a run in the bottom of the inning without a hit. Braves reliever Luke Jackson hit Kris Bryant with his first pitch. Bryant moved to second on a wild pitch, advanced to third on Zobrist’s grounder to second, and scored on another wild pitch.

With the Cubs leading 11-4, manager Joe Maddon turned to left-hander Justin Wilson in the seventh. Wilson quickly got in trouble by walking the first two batters, Albies and Freeman. A one-out double by Markakis made the score 11-6.

Wilson was removed for Koji Uehara. Suzuki singled to left to score Markakis, and Swanson doubled to left to put runners on second and third with one out. But Ruiz lined into a double play with Swanson out at second.

Chicago got two of the runs back in the bottom of the seventh. Rivera singled and pinch-hitter Tommy La Stella walked. Sam Freeman relieved for Atlanta. After a sacrifice bunt by Jay moved up the runners, Albert Almora grounded a pinch-hit single to left to score both.

After Felix Peña walked Lane Adams and Jace Peterson to start the eighth, Carl Edwards Jr. took over for the Cubs. With one out, he allowed an RBI double to Freeman and an RBI groundout to Kemp. The Braves had trimmed the deficit to 13-9.

Heyward gave the Cubs a little more breathing room with a two-out solo homer against Jim Johnson in the eighth to make the score 14-9.

Atlanta refused to go quietly in its final at-bat. Suzuki singled leading off against Brian Duensing and took second on a passed ball. He advanced to third on Swanson’s infield single; Swanson was originally called out, but the Braves challenged the call and after the umpires’ video review it was overturned. Pinch-hitter Matt Adams drove in Suzuki with a grounder to second for the first out.

Just three innings earlier it seemed unlikely that Cubs closer Wade Davis8 would be needed, but now he was forced into action in a save situation. On the season, he had a 3-1 record with 28 saves and a 2.12 ERA.

Davis got Adams to ground to shortstop for the second out but gave up an RBI double to Peterson. A wild pitch moved Peterson to third and he scored on Albies’ single to right. With the tying run at the plate, Davis ended the Braves’ comeback attempt with a swinging strikeout of Freeman.

The win was the Cubs’ ninth straight at Wrigley Field. Maddon summed it up simply after the game, saying, “It wasn’t easy, but we won it.”9

Freeman lamented the Braves’ rally that came up short: “We’ve been doing that all year. It’s always a little too late. We always come up short, but at least we give a little scare at the end.”10

Despite laboring through five innings in which he threw 92 pitches, Lester picked up his ninth win of the season. Reflecting on this first start since coming off the DL, he said, “We found out everything’s fine. I felt like the ball was coming out pretty well. Maybe a couple pitch selections to have back, but we won the game. We’re all good. Moving in the right direction.”11

“Today was kind of a weird game,” he continued. “[The bullpen has] to cover four innings. You’re going to find someone that has an offday. Our guys did a great job of minimizing and finishing that game out. I love where our pitching staff is from top to bottom.”12

The Cubs finished 92-70 and won the NL Central Division by six games over the Brewers. But they were unable to win consecutive World Series. After edging the Washington Nationals 9-8 in the deciding Game Five of the Division Series, they lost the National League Championship Series in five games to the Los Angeles Dodgers.

The author attended this game with his wife, son, and sister on a Labor Day weekend trip. After the game, he and his 17-year-old son dropped the ladies off at the hotel and caught the train down to Guaranteed Rate Field, arriving just before the first pitch. They completed a unique doubleheader by watching the White Sox beat the Rays, 5-4. The two games featured a combined 11 home runs.

8 Davis had joined the Cubs after saving 27 games the previous year with Kansas City. This would be his only season with the Cubs. For the 2018 season, he signed with the Colorado Rockies and led the NL with 43 saves.