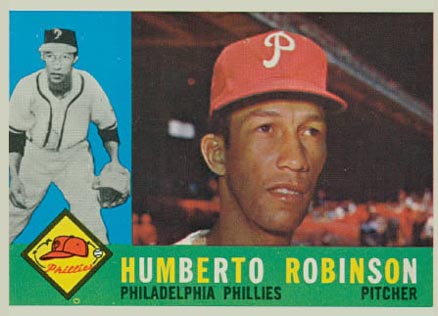 The game, rescheduled from an April 12 rainout, unremarkable. The 72-80 Cincinnati Reds visited Connie Mack Stadium to face the 63-88 Philadelphia Phillies. In the nightcap of a twi-night doubleheader, a paid crowd of 8,533 saw Vada Pinson hit his 20th home run of the season in the fourth inning, a two-run shot off winning pitcher Humberto Robinson.1 Spectators were also treated to a decent pitchers’ duel. Robinson gave up two runs in seven innings.  Jack Meyer pitched two scoreless innings in relief of Robinson. Meyer gave up no hits, walked one, and fanned two, recording his first save of the season and the last save of his seven-year career.2 Bob Purkey of the Reds surrendered three runs in seven innings. Jim Brosnan contributed an inning of shutout relief for the Reds. The Phillies defeated the Reds, 3-2. The game is memorable for what took place off the field, before home-plate umpire Ken Burkhart shouted, “Play Ball!”

Forty years after the Black Sox Scandal, 42-year-old Harold “Boomy” Friedman, part-owner of the Moonglo Café in Philadelphia, approached Robinson and offered him money to throw the game against the Reds. The two men had known each other since 1955. The café, located in downtown Philadelphia at the corner of Juniper and Race Streets, was first known as Club Colistic. It comprised the first floor of the Hotel Cornelius. The nightclub/supper club was known to and frequented by National League players coming to Philadelphia to take on the Phillies. Popular for its atmosphere and tasty steaks, the Moonglo attracted such stars as Willie Mays.3

The meeting between Friedman and Robinson apparently took place at Philadelphia’s Warwick Hotel the morning of the game. According to Robinson’s courtroom testimony nearly a year later, Friedman first approached him the night before the game and indicated that he wanted to place a bet on Cincinnati for the following night’s game. “On the day of the game, Robinson testified, Harold Friedman showed up at his hotel room. According to Robinson, (Friedman) had told him that he wanted me to lose the game. Friedman told Robinson that “he wanted to bet $3,000 or $4,000 that Cincinnati would win. … I say I don’t want to do that. … I like to play baseball. It’s my profession.”4

Several newspapers reported a slightly different version of events. Robinson testified that Friedman said to him, “Well, there’s $1,500 in it for you.”5 To which Robinson replied, “I like baseball too much. I don’t want any part of it.”6

Robinson also recalled that during the meeting, “Friedman handed $200 or $300 in his direction. He placed it on the washbasin while Humberto was washing. The money fell in the water and Robinson had insisted that Friedman take it out.”7

Not surprisingly, Friedman’s recollection of the events was at odds with Robinson’s version. First, Friedman claimed his purpose for visiting Robinson the night before the game was to find out in which game of the doubleheader he was scheduled to pitch. In court, “Friedman testified that he went to Robinson’s hotel room after the pitcher revealed to him that he had been robbed the previous night. Friedman stated that Robinson had told him that he did not “have enough money to get to the ballpark.”8

Apparently, Robinson didn’t tell anyone about the bribe offer at the time. He waited until the first game of the doubleheader ended before informing teammate Ruben Gomez. Despite imploring Robinson to inform Phillies manager Eddie Sawyer, Robinson remained quiet about the events and took the mound for his scheduled start. “I want to pitch a good game, then I’ll tell Sawyer,” he told Gomez.9 Robinson finally delivered the message to Sawyer during the fifth inning and again, together with Gomez, after the game.10 Sawyer realized the seriousness of the allegations and wasted no time reporting it. Friedman was subsequently arrested.

“Philadelphia Police Commissioner Thomas J. Gibbons testified that he first learned about the bribe offered to Robinson from Major League Baseball Commissioner Ford Frick. Frick notified Gibbons … on the morning of September 24th. Gibbons found out the details of the crime from a representative in the commissioner’s office. The representative had travelled to Philadelphia and initiated court action.”11

Friedman went on trial on June 29, 1960. In court, his attorney, Michael von Mochzisker said his client was celebrity-happy. He called the allegations against him silly. Von Mochzisker “claimed that since Robinson had won only one game,12 there would be no sense in trying to fix (the game against the Reds).”13

After a one-day trial, Boomy Friedman was found guilty. He was sentenced on August 1, 1960, to two to five years in prison for attempted bribery.14 In handing down the sentence, Judge Ethan Allen Doty said, “All of our youth look to this National Pastime. All look to the integrity and all-out effort to win in all ballplayers.”15

At the time of sentencing, Humberto Robinson was pitching for the Triple-A Buffalo Bisons, a Phillies affiliate in the International League. He had last pitched for the Phillies on July 24, 1960, and never pitched in the major leagues again. He died on September 29, 2009, in Brooklyn, New York.

1 Robinson was the first Panamanian-born major-league player. He had come to the Phillies from the Cleveland Indians on May 16 in a trade for Granny Hamner.

12 By September 22, 1959, Robinson had won two games. As a member of the Indians he got the win against the Chicago White Sox on April 24. He won his second game on June 14 against the San Francisco Giants, after the trade to the Phillies.

14 Friedman was also investigated for arranging prostitutes for several (unnamed) major leaguers as well as lending money to players. According to Reynolds, “Friedman had testified during his June 1960 trial that he had loaned money to visiting baseball players from time to time. None of the players’ names were revealed by him. The gambler revealed a letter from one of the players who thanked him for lending him money. Ford Frick received a copy of the letter at his New York office. He admitted that the three players were involved in obtaining loans, but he refused to name either the players or the teams they played for. The identities of the three major leaguers who had sexual relations with minor Irene Bright, in rooms above the Moonglo Cafe, remains a secret, as far as I know. The players’ names have been kept from public knowledge by the baseball establishment and the Philadelphia Police Department.”