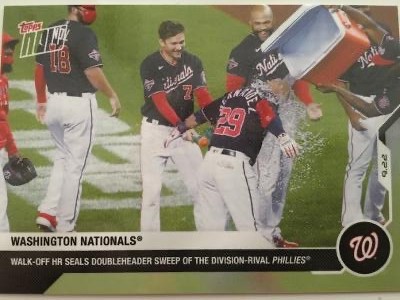 The Washington Nationals and Philadelphia Phillies, division rivals in the National League East, postponed their scheduled August 27 game at Nationals Park during the tumultuous summer of 2020 in a joint decision to redirect attention toward racial inequality and police brutality.1 They made up the game as part of a doubleheader when the Phillies returned to Washington in September.

In the second game of the doubleheader, played on September 22, the convergence of two rule changes from the 2020 COVID-19 protocols – seven-inning doubleheader games and the “runner placed on second base in extra innings” rule – resulted in one of the most unusual walk-off home runs in major-league history, by Nationals rookie Yadiel Hernández.

This game would not feature such pitching efficiency: The Phillies had planned a bullpen game.2 As soon as one pitcher took the mound, the next one warmed up in the bullpen. For their part, the Nationals were giving Paolo Espino a chance. He had last appeared on a big-league mound in 2017 for the Texas Rangers.3

The defending World Series champion Nationals entered the day last in the NL East at 21-32, 10½ games back of Atlanta. The Phillies (27-27) were third in the division, only five games back, but with only four games left in the season after this one it was clear that neither team would see the postseason, barring a miracle.4

Andrew McCutchen opened the first inning with a single. Bryce Harper was robbed of a one-out double by a great running catch by Andrew Stevenson in left. Typically the Nationals played Juan Soto in left, but with Adam Eaton injured,5 Soto could move to right field, the position he had played in the minors (and earlier). JT Realmuto struck out to end the frame.

David Hale was the first pitcher for the Phillies, making his second start of the abbreviated 2020 season. Trea Turner hit a one-out double past Harper in right and advanced to third on a passed ball, but Soto struck out and Kurt Suzuki popped out to leave him there.

Didi Gregorius, one of the few players who wore a mask while playing,6 doubled past a diving Stevenson. He would have made it to third but fell down a few feet after rounding second, just making it back safely. Andrew Knapp’s one-out single scored Gregorius. Knapp advanced on Scott Kingery’s groundout and scored on Roman Quinn’s single. The throw in from center by Michael A. Taylor was on target but Knapp’s hand snuck in under the tag. McCutchen grounded out, but the Phillies led, 2-0.

The Phillies’ second pitcher, Adam Morgan, pitched a clean bottom of the second. Eric Thames’ fly ball was caught on the warning track. In the summer it would have been a home run, but the game-time temperature was 70 degrees and falling.

The Phillies had more traffic on the bases in the third. Alec Bohm singled. Harper hit into a fielder’s choice. Rookie second baseman Luis García made the more difficult throw to get the out at second rather than the safe out at first. Harper made it to third on Realmuto’s long single off the wall but Gregorius grounded into a double play, leaving him there, so García’s risky decision paid off.

Perhaps for matchup reasons, Morgan remained on the mound in the third to pitch to 32-year-old rookie Yadiel Hernández, who was playing in his only seventh major-league game. He got Hernández to fly out and gave way to David Phelps. Taylor doubled off the top of the center-field wall, missing a homer by inches, and scored on Stevenson’s single.

Stevenson took second on Turner’s seeing-eye single up the middle. After three straight hits allowed by Phelps, Phillies manager Joe Girardi called on JoJo Romero to see if he could get an out. He did eventually get the two outs needed to end the inning, but only after giving up a three-run homer to Soto on his first pitch, putting the Nationals up, 4-2.

The Phillies pulled closer in the top of the fourth: Kingery hit a two-out solo homer into the empty stands in left: 4-3, Nationals.

Girardi tried leaving Romero in for the fourth. That experiment didn’t last long. Romero walked Thames and gave up Hernández’s first major-league RBI. He doubled into the left-field corner, where the ball bounced around long enough for Thames to score standing. Tommy Hunter got the first out by striking out Taylor, but Stevenson tripled when Harper couldn’t handle the ball in right field, scoring Hernández. Harper’s throw in was off-line but Stevenson was held at third. He was left there when Soto struck out and Suzuki grounded out, but the Nationals had widened their lead to 6-3.

Kyle McGowin in the fifth was the first pitcher out of the Nationals’ bullpen. McCutchen battled and earned a walk. Bohn singled. McGowin got two outs but left two on base for Wander Suero – who let them both score on his first pitch to Gregorius, who doubled. Suero got out of the inning, but the Phillies again were behind by only one, 6-5.

Hunter pitched the bottom of the fifth, allowing no hits although he hit Thames.

The good news was that Suero faced five batters in the top of the sixth and did not allow a hit. The bad news is that with two strikeouts, two walks, a stolen base, and a hit-by-pitch, he left the bases loaded for Kyle Finnegan. The good news was that Finnegan got a groundball to short – the bad news was that Turner’s throw to Thames was high enough that he had to jump, and Realmuto’s foot beat Thames’s to the bag. Umpire Joe West originally called the runner out; but the call was overturned, the runner was safe, and the run scored to tie the game, 6-6. Then Gregorius flied out.

Nothing doing for the Nationals in the bottom of the sixth: The Phillies’ sixth pitcher, Héctor Neris, got three groundball outs.

Finnegan allowed a single to Jean Segura to start the seventh, but a double play and a groundout allowed him to face the minimum as well.

Neris walked Soto to start the bottom of the seventh.7 Suzuki and Brock Holt both struck out. While Holt was batting, Neris threw over to first. The Nationals’ artificial crowd noise booed, just as the real fans would have if they’d been there. Soto stole second; the catcher’s throw hit him as he slid in. That was to no avail as García hit a comebacker to Neris, which he handled easily.

Since the eighth inning was now an extra inning, a Philadelphia runner was placed on second. Pinch-hitter Jay Bruce had made the last out of the seventh and would normally have been that runner, but he was replaced by pinch-runner Phil Gosselin. Gosselin, preparing for his assignment, was running in foul territory between innings to warm up.

Daniel Hudson, the Nationals’ closer, took the mound for the eighth. Quinn bunted perfectly toward third. Third baseman Holt threw the ball into the stands, Gosselin scored, and Quinn took second. McCutchen lined right into Turner’s glove for the first out. With Bohm batting, Quinn stole third. After the umpires conferred, Quinn was sent back because Bohm’s backswing hit Suzuki’s shin guard. Both Bohm and Harper walked to load the bases. Hudson got out of the inning with no further damage when Realmuto struck out and Gregorius popped out, but the Phillies had a 7-6 lead.

The Phillies’ closer, Brandon Workman, pitched the bottom of the eighth. García was the runner on second. After Thames struck out, Hernández hit his first major-league home run,8 off the back of the Nationals’ bullpen, winning the game for the Nationals, 8-7.

In addition to Baseball Reference, Retrosheet, and the sources cited in the Notes, the author reviewed the broadcasts on MLB.com.

2 With the pitching changes (12 pitchers for an eight-inning game), the challenges, and all the scoring, the game ran 3:25.

3 Espino spent the intervening years in Triple A for the Rangers, Brewers, and Nationals. Since the minor leagues were canceled in 2020, he spent the 2020 season at the “Alternate Training Location” for the Nationals in Fredericksburg, Maryland. Under the 2020 COVID-19 protocols, a limited number of players could train at these sites as injury replacements or call-ups for doubleheaders. (An additional player could be added to the active roster for doubleheaders.)

4 No miracles occurred: they both missed the playoffs.

6 Umpires, coaches, and other nonplaying personnel were supposed to be wearing face coverings at all times. (They usually did, but often did not have them properly covering their noses. This game was no exception.) Masks or gaiters were optional for players in the lineup.

7 This was Soto’s third walk of the day – he also had an intentional and an unintentional walk in the first game. He finished the year fourth in the major leagues in walks with 41, contributing to his major-league-leading OBP of .490.

8 No one who knew Hernández was surprised. He was Washington’s 2019 Minor League Player of the Year, leading their minors in home runs and most other hitting statistics. Per Baseball America, he was the “Best Power Hitter” in Washington’s minor-league system. “Nationals Select Contract of Yadiel Hernández,” masn.com, September 10, 2020. https://www.masnsports.com/masn-news-information/2020/09/nationals-select-contract-of-yadiel-hernandez.html. Retrieved February 14, 2021.