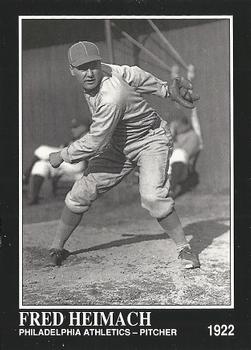 Another eighth-place finish was almost a certainty for the homestanding Philadelphia Athletics (48-93) as they hosted the seventh-place Chicago White Sox (58-87) in a doubleheader at Shibe Park on September 23, 1921. Philadelphia had finished last in the American League each year from 1915 to 1920, and even though the White Sox arrived in town on an eight-game losing streak, Chicago was still comfortably ahead of Philadelphia in the standings, by eight games. The Athletics could escape the cellar only if they won at least 11 of their final 12 games and the White Sox lost at least eight of their final nine. It was an unlikely scenario.

The White Sox won American League crowns in 1917 and 1919, and were contending for another pennant in September 1920 when a conspiracy with gamblers to throw the 1919 World Series was exposed. On September 28 owner Charles Comiskey suspended the seven alleged conspirators still on the Chicago roster,1 and the White Sox finished second, two games behind Cleveland. With the tainted players still under suspension in 1921, the depleted White Sox fell sharply in the standings.

The Friday afternoon twin bill between the Athletics and White Sox was the beginning of a five-game series. In the first contest, Philadelphia manager Connie Mack – in his 21st season at the helm – was relying on the left-handed pitching skills of Fred Heimach, who was appearing in just his second major-league game. The previous fall, at age 19, Heimach failed miserably in his debut. In the last week of the 1920 season, he was slammed for 13 hits and nine runs by the Washington Nationals in just five innings on October 1. Heimach held the Nationals scoreless in the first inning, but Washington scored two in the second, one in the third, and three each in the fourth and fifth to drive the teenager from the mound. He was the losing pitcher as the Nationals routed Philadelphia, 13-3.

After his disastrous outing, Heimach was returned to the minor leagues, and toiled for the Moline (Illinois) Plowmen under the tutelage of Mack’s son, Earle Mack. The Plowmen – their team president was future National League President Warren Giles – had just claimed the 1921 Three-I League championship. Heimach played a significant role in their success, leading the league in wins (24-8) and earned-run average (2.38). With Moline’s season completed, the Athletics rewarded Heimach with a well-deserved second chance.

The White Sox selected Roy Wilkinson, to oppose Heimach. Wilkinson entered the contest with a 3-19 record and a 5.06 earned-run average. The right-hander had lost eight times since he registered his last win, on August 9 – a complete-game 5-4 triumph over the pennant-bound New York Yankees.

Neither team crossed home plate until the third inning, when Wilkinson’s lack of control and his teammates’ shoddy defense combined to deliver two Philadelphia runs. Whitey Witt walked to start the rally, and was bunted to second by Jimmy Dykes. Tillie Walker also walked before Glenn Myatt lined into the second out. Ben Mallonee singled to center field to bring Witt home, and when Chicago’s Johnny Mostil bobbled Mallonee’s ball, Walker continued to third base.

With runners on the corners, and Chick Galloway batting, Mallonee broke for second. Catcher Ray Schalk threw down, but no one covered the bag. When Schalk’s throw bounded into center field, Walker trotted in with the second Philadelphia run.

The Athletics added to their lead in the fifth when Walker drew his second walk. He reached second on an infield out and scampered home on Mallonee’s double off the bleacher wall to put Philadelphia up 3-0.

The final Athletics run came in the eighth. After Wilkinson walked Frank Callaway, Frank Brazill hit a bounding ball to Eddie Collins at shortstop. The usually sure-handed Collins booted it, giving Brazill first base and permitting Callaway to race to third. Heimach’s single to left field plated Callaway and gave Philadelphia a 4-0 advantage that it maintained to the end of the game.

Wilkinson gave up seven hits – matching Heimach – but he walked six, and four of the players getting free passes scored. The White Sox committed four errors, with three of them contributing directly to two of the Athletics’ runs. Wilkinson’s record fell to 3-20. (He was credited with a win on the final day of the season to finish 4-20.2)

Heimach “pitched almost air-tight ball.”3 He was tagged for seven hits, and he issued one walk. Only in the sixth inning did Chicago threaten to score. Harry Hooper doubled, but was thrown out at home by Witt while trying to score on Hervey McClellan’s single to right. With that exception, “the Sox were docile.”4

Philadelphia turned three double plays. Heimach initiated one of them when he caught a ball hit back to him in the air, and fired to first base before the baserunner could return. As his hometown Camden (New Jersey) Morning Post remarked, he “fielded his position in a fashion beyond criticism.”5

Considering his pitching disaster of the previous year, Heimach must have been gratified by his performance. He notched his first win, tossed a shutout, drove in a run, and fielded his position flawlessly. Philadelphia’s Evening Public Ledger was certainly impressed with his effort, declaring “The Camden lad had everything a big-league hurler needs.”6 The newspaper further lauded Heimach: “To jump from Moline, in the Three I League, to the majors and hand a club a shutout is something to be talked about in the daily press.”7

Heimach was the only Athletics pitcher to toss a shutout in 1921. Nevertheless, he did not appear in any of their remaining 10 games that season.

Philadelphia won the second game of the doubleheader, 9-1, stretching Chicago’s losing streak to 10. The White Sox won just one of the five games played in Philadelphia, but beat Cleveland in three of their final four contests to secure seventh place with a 62-92 record, 8½ games better than the Athletics (53-100), who staggered into the offseason by losing their last six games.

Heimach remained with the Athletics until a 1926 trade to the Boston Red Sox. He spent 1927 with St. Paul in the American Association, but returned to the major leagues in 1928 and stayed until 1933. He compiled an unspectacular lifetime won-lost mark of 62-69. Heimach did not blank another big-league opponent until 1929, when he threw three shutouts in just 10 starting assignments for the New York Yankees.

2 Wilkinson started, pitched just two innings before giving way to a pinch-hitter, and exited with a 5-3 lead. Chicago won 7-4. Under modern scoring rules he would not have been credited with the win.