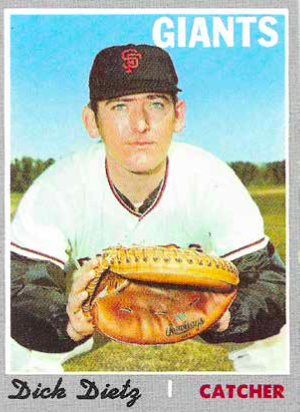 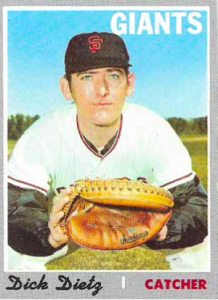 The San Francisco Giants journeyed to Los Angeles for a late-season three-game series with the Dodgers beginning on September 21, 1970. As the series began, the Dodgers, were in second place in the National League West but 12 games behind the Cincinnati Reds. The Giants, in third place, were just one game behind Los Angeles. The Dodgers were managed by Walter Alston and Charlie Fox was at the helm of the Giants. In the first game of the series, Juan Marichal of the Giants shut out the Dodgers, putting the two teams in a tie for second place. The Dodgers rebounded the next night, beating the Giants 1-0 and setting up a rubber match for Wednesday night.

For this final game, the Giants had future Hall of Famers Willie Mays and Willie McCovey in their lineup. The Dodgers were led by Maury Wills and Willie Davis. Gaylord Perry, another future Hall of Famer, was starting for the Giants, and rookie Sandy Vance was taking the ball for Los Angeles. Before the game, it was announced that Alston would be rehired for the 1971 season.1 Alston had managed the Dodgers since 1954, all on one-year contracts.

Both teams went out in order in the first inning as did the Giants in the top of the second. In the bottom of the second, Wes Parker led off with a double and took third as Tom Haller grounded out to Perry. Bill Sudakis singled, scoring Parker. Sudakis stole second and went to third on a wild pitch. After Bill Buckner grounded out to second, Billy Grabarkewitz, the Dodgers second baseman, doubled to right, scoring Sudakis. Vance hit a grounder to McCovey, who flipped to Perry covering first but Perry couldn’t handle the throw. Grabarkewitz scored, making the score 3-0. Wills then flied out to shortstop, ending the inning.

The Giants again went out in order in the third. Vance retired the first nine Giants. In the bottom of the third, Manny Motareached first base on an error by Giants shortstop Hal Lanier. Mota went to second on a wild pitch and to third on a groundout, and scored on a sacrifice fly off the bat of Parker. At the end of three innings the Dodgers led 4-0.

Bobby Bonds led off the top of the fourth with a walk, the first Giants baserunner. Tito Fuentes followed with a single, moving Bonds to second. Willie Mays hit a liner to center. Willie Davis snagged the ball and who doubled Bonds off at second. Willie McCovey singled to right, moving Fuentes to third and McCovey took second on the throw to third. But Ken Henderson ended the threat by flying out to center field.

In the bottom of the fourth, the Dodgers added another run to their lead as Wills’s single scored Buckner with an unearned run set up by McCovey’s error. The Giants threatened again in the top of the fifth; they had runners on first and third with no outs but the next three batters, including Bernie Williams pinch-hitting for pitcher Perry, made outs.

The Giants had a new pitcher, Skip Pitlock, to begin the fifth, and Frank Johnson replaced McCovey at first base. Pitlock walked Willie Davis, who scored on a double by Wes Parker. Left fielder Ken Henderson booted Parker’s hit and he went to third; he scored on a single by Bill Russell, pinch-hitting for Buckner. As the inning ended, the Dodgers had increased their lead to 7-0.

The Giants went out in order in the top of the sixth. The Dodgers added to their lead when Vance doubled to lead off the bottom of the inning, went to third on Mota’s single, and scored when Davis hit a force-play grounder against John Cumberland, the Giants’ third pitcher.

As the top of the seventh began, the Dodgers had a comfortable 8-0 lead but the Giants were not done. After Henderson grounded out, Dick Dietz singled to center and Jim Ray Hart homered. Ed Goodson batted for Hal Lanier and singled. Bob Taylor pinch-hit for Cumberland and flied to left field for the second out. Bonds singled to center. With runners on first and second, Alston called upon Pete Mikkelsen to relieve Vance, who had pitched well. Mikkelsen was greeted by run-scoring singles from Fuentes and Mays, whose hit made the score 8-4. Jim Brewer replaced Mikkelsen with the bases loaded and walked Henderson, scoring Fuentes. The Giants trailed 8-5. But Dietz hit a grand slam, giving the Giants a 9-8 lead. After giving up a single to Hart, Brewer finally got out of the inning. For the Dodgers, it was 33 nightmarish minutes.2

Jerry Johnson began the bottom of the seventh on the mound for the Giants and retired the Dodgers in order. The Giants went out in order in the top half of the eighth. In the bottom of the eighth, the Dodgers’ Von Joshua, pinch-hitting for Brewer, singled but was thrown out at second trying to stretch his hit. Wills got an infield single, stole second, and went to third on a groundout. He scored on an infield single by Davis. After Parker walked, Don McMahon replaced Johnson and retired pinch-hitter Jim Lefebvre. The game was tied, 9-9, going into the ninth.

Ray Lamb began the ninth on the mound for the Dodgers. With one out, Frank Johnson singled and Ken Henderson walked. Dietz flied deep to right and Johnson took third. The Dodgers walked Jim Ray Hart intentionally. Art Gallagherpinch-hit for pitcher McMahon. He singled to center, scoring Johnson but Henderson was thrown out at home trying to score from second. The Giants led 10-9 going into the bottom of the ninth.

Rich Robertson was called upon by the Giants to finish off the Dodgers but he was unable to do so. Sudakis singled to lead off, was sacrificed to second by Russell, and went to third on a wild pitch. With two outs, pinch-hitter Len Gabrielson singled, tying the score and sending the game into extra innings.

In the top of the 10th with one out, Bobby Bonds got a second life as Dodgers catcher Joe Ferguson lost his foul pop behind home plate.3 Bonds then singled to right and stole second. Fuentes followed with a walk. The Dodgers replaced Lamb with Mike Strahler, who walked Mays, loading the bases. Johnson hit a grounder that Wills bobbled for a second, negating what would have been an inning-ending double play.4 Bonds scored while the other runners moved up. Ken Henderson then homered, and the Giants led, 14-10. In the bottom of the inning, Mota led off with a walk but Robinson retired the next three Dodgers, giving the Giants the victory. The two teams now had identical 84-71 records with six games to play in the season.

The hitting heroes for the Giants were Dietz, Ken Henderson, and Jim Ray Hart, who all homered. Dietz and Henderson each had four RBIs. Dietz’s grand slam brought the Giants from three down to a one-run lead. Frank Johnson, who replaced McCovey, also had a big role in the win. Wes Parker and Willie Davis each had two RBIs for the Dodgers. Rich Robertson was the winning pitcher and Ray Lamb was the loser.

While the teams were now tied, the Dodgers were able to edge out the Giants for second place when the Giants lost their last four games of the season. Both teams finished far behind the Cincinnati Reds in the National League West. McCovey was the Giants’ season offensive leader with 39 home runs, 126 RBIs, and an OBP of .444. Wes Parker was the Dodgers’ leader; he led the league in doubles and had an OBP of .392. Gaylord Perry, although ineffective in this start, had a remarkable season for the Giants, starting 41 games, pitching 328⅔ innings, and winning 23 games.