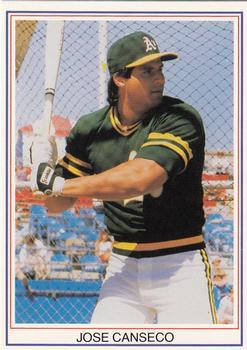 Baseball’s 40–40 Club is a noteworthy accomplishment, not simply because the record books show that hitting 40 or more home runs and stealing 40 or more bases in the same season is an elusive feat, but also because it demonstrates a player’s “completeness.” It is an illustration of Aristotle’s observation that “the whole is greater than the sum of its parts.”

Stolen bases require speed and expert timing. Home runs require dynamic slugging power. To utilize one skillset is to be a quality player—to possess both is to be an offensive juggernaut. In 1988, 24-year-old Oakland Athletics right fielder José Canseco demonstrated these qualities on his way to becoming the first member of the 40–40 Club in major-league history.

Much of the 1988 season saw the A’s at the top of the American League West—a position established a mere 15 games in and maintained during the entirety of the regular season. Manager Tony La Russa had big bats and a pitching staff that could shut down any opponent. On September 19, with two weeks remaining in the regular-season schedule, the A’s clinched the team’s first division title since 1981.

At the plate, A’s batters were capable of consistent hitting and, often, power slugging. Table-setting by infielder Tony Phillips and center fielder Dave Henderson provided regular RBI opportunities. The power duo of 1986 AL Rookie of the Year Canseco and ’87 Rookie of the Year Mark McGwire, known as the Bash Brothers for their forearm-pounding variation of the high-five, turned the A’s into a scoring machine.

For all the home runs Oakland had hit thus far, on the night of September 23, in a road game against the Milwaukee Brewers, Canseco was perhaps content with stolen bases—two, to be exact.

The slugger had hit his 40th home run five days earlier, off Bret Saberhagen of the Kansas City Royals. But a league-leading homer total was not surprising for Canseco, who had hit over 30 home runs in 1986 and 1987, his first two full major-league seasons.

What was less expected were his stolen bases: 38 so far in 1988, well above the 15 he swiped in each of the previous two seasons.

More significantly, Canseco was just two steals from becoming the first player to steal 40 bases and hit 40 home runs in the same season.

One member of the club, Hank Aaron in 1963, had topped 40 homers and 30 steals. An unprecedented total of four new members had joined the 30–30 Club in 1987: Joe Carter, Howard Johnson, Darryl Strawberry, and Davis.

Nobody, however, had finished above 40 in both categories.

Becoming the first to 40–40 was not an impossible dream for Canseco. Early in the ’88 season, he told reporters, “I think I can have a 40–40 season. Let’s go for a big-time goal.”1 It was a big-time goal indeed, but perhaps perplexing was Canseco’s revelation that, when setting the goal, he wasn’t aware it had never been accomplished.2

The Friday night matchup in the season’s next-to-last weekend set 23-year-old Brewers left- hander Juan Nieves against Oakland righty Curt Young. Nieves looked like an emerging young talent. On April 15, 1987, he had thrown a no-hitter against the Baltimore Orioles, making him the first Puerto Rican pitcher to do so in the big leagues.3

Oakland jumped on the scoreboard right away. Phillips led off the first with a single to left field and took third one out later on Canseco’s single to shallow right field. While McGwire took his time at the plate, Canseco found his first opportunity to test both Nieves and catcher B.J. Surhoff.

On a 0-and-1 count to McGwire, Canseco made for second and was easily safe. Before the first keg had run dry at County Stadium, Canseco had number 39. McGwire singled home Phillips and Canseco, and the A’s had an early 2-0 lead.

Through much of the second, third, and fourth innings, bats on both sides of the diamond were quiet. Milwaukee’s Nieves pitched well enough to prevent an Oakland hitting surge but struggled to consistently manufacture outs against the swinging A’s. Oakland’s Young relied on his team’s defensive skills and a series of groundouts to keep the Brewers at bay.

In the top of the fifth inning, Canseco, who had flied out in the third, returned to the plate for the third time. Surprisingly, baseball’s premier home-run hitter darted a bunt to third base and reached first safely before Paul Molitor could attempt the throw.

As in the first inning, Canseco saw an opportunity. On a 0-and-1 count to McGwire, Canseco leaned off his right leg and with head down committed to the steal early in Nieves’ delivery. Canseco slid low. Surhoff’s throw came in high and away from the bag. Second baseman Jim Gantner applied a late tag, knocking Canseco’s helmet off his head. Canseco had stolen his 40th base of the season.4

In the ensuing chaos, Canseco called for time and motioned to second-base umpire John Hirschbeck. Canseco asked Hirschbeck if he could, in a very literal sense, take the base. Initially, Hirschbeck laughed off the request. After he confirmed with the field crew that a replacement was available, Hirschbeck gave Canseco the go-ahead to pull number 40 from the infield dirt.

Canseco ripped the base from the cold Milwaukee ground, lifted it above his head in victory, and handed it to third-base coach Jim Lefebvre.5 Asked later about his achievement, he admitted, “I’m greatly relieved at having done it. … I didn’t want to go through the season and come up short and say I stuck my foot in my mouth.”6

The celebratory moment faded and both teams refocused. Two batters later, Don Baylor singled Canseco and McGwire home for a 4-0 Oakland lead. Nieves was replaced by Odell Jones, a right-hander in what was the final big-league appearance of his career.

Milwaukee answered with two runs in its half of the fifth, but the relentless A’s continued to slug away against Jones. After striking out Canseco in the sixth, he gave up a home run to McGwire in the seventh, making the score 5-2.

What followed was a turnstile rotation of pitchers for both teams. After Jones departed, Canseco struck again with hist 41st home run of the season, a three-run shot off Chuck Crim in the eighth inning.

The Brewers refused to concede, though, as right fielder Rob Deer countered with a home run off Eric Plunk to make the score 8-3. In the bottom of the ninth, two singles off Greg Cadaret and three off closer Dennis Eckersley tied the game, 8-8. Canseco was replaced by rookie Félix José in the ninth, finishing the night with a home run and two stolen bases in a 3-for-5 effort.

On to extra innings, La Russa exchanged Eckersley for left-hander Rick Honeycutt, eventually moving to Gene Nelson and finally Todd Burns. The Brewers and the A’s were deadlocked through the top of the 14th inning, a tug-of-war consistent with general fatigue that often shows itself in late-September extra-inning games.

The spell was broken when José, appearing in only his seventh major-league game, singled, took second on a sacrifice, and stole third. Fellow rookie Doug Jennings—who, like José, had entered the game in the ninth with the A’s seemingly in control—drove in the go-ahead run with a sacrifice fly off Chris Bosio.

Burns faced the minimum three Milwaukee batters in the bottom of the 14th and the game was over, just over five hours after the first pitch and 40 minutes after midnight. Oakland’s 9-8 win gave the A’s 99 victories, the franchise’s most since 1971.

Oakland finished the 1988 regular season with a 104-58 record, then swept the Boston Red Sox in the American League Championship Series. They were heavy favorites against the Los Angeles Dodgers in the World Series.

Unfortunately for the A’s, Kirk Gibson, Orel Hershiser, and the rest of the Dodgers had other ideas. In a five-game series, the Dodgers extinguished the fire that the A’s had kept aflame over the course of the season. Still, Canseco, who finished with 42 homers, 40 steals, and league-leading totals in RBIs (124) and slugging percentage (.569), was voted the AL Most Valuable Player.

Canseco’s 40–40 status was unmatched for some time. Eight years and four days passed before another member joined the club. On September 27, 1996, San Francisco Giants slugger Barry Bonds—himself a 30–30 Club member in four other seasons, and the son of five-time 30–30 Bobby Bonds—reached the mark in a 9-3 Giants win over the Colorado Rockies. Álex Rodríguez followed suit in 1998 and Alfonso Soriano in 2006.7

There is only one “first” for every achievement, though. On that cold Milwaukee night in September, Canseco was the first.

In addition to the Sources cited in the Notes, the author consulted Baseball-Reference.com, Retrosheet.org, and SABR.org websites for pertinent material, including the box score and play-by-play.

3 Rory Costello, “Juan Nieves” Biography Project. Society for American Baseball Research. Unfortunately for Nieves, he faced the A’s in what turned out to be one of his last games as a major-league pitcher. In spring training of the following season, Nieves suffered a career-ending shoulder injury. Wayne Coffey, “It’s a Juan-Derful Life: Nieves Finds Niche as Pitching Coach—After Injury-Shortened Career, Ex Phenom Has Wisdom to Offer.” New York Daily News, August 29, 1993: 59.