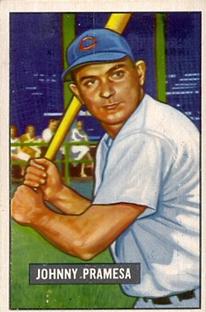 In their final home game of the 1951 season, the Cincinnati Reds took advantage of bases on balls and long balls to defeat the St. Louis Cardinals in a 14-inning thriller. According to the Cincinnati Enquirer, “Big John Pramesa’s first major league grand slam enabled the Reds to ring down the curtain on the 1951 season”1 before a Crosley Field crowd of 3,042, gaining a 7-3 victory. The game was the Reds’ first-ever night season closer.2 Two home runs provided all the run support Ken Raffensberger needed as he hurled a 14-inning complete game and earned his 16th win of the season.

Cincinnati was finishing a second straight sixth-place season in the National League. It had been seven years since the Reds posted a winning record, and attendance at Crosley Field was the second lowest in the league. Fans wanted some good news to get them through the winter. This game gave them hope. On the other side of the field, St. Louis was fighting for a third-place finish. With a victory, “Marty Marion’s warriors [could] sew up that slice of the National League world series pool.”3 The Cardinals had posted winning seasons since 1932 and had captured three World Series championships in the 1940s.

St. Louis sent veteran Max Lanier4 to the mound to oppose Cincinnati’s Raffensberger. Lanier was in his 12th season with St. Louis.5 He came into the game in search of his 12th victory, sporting a 3.24 earned-run average. He had beaten the Reds five times in 1951, including in each of his last four starts against Cincy (and all four victories were complete games). Raffensberger was making his 42nd appearance and 33rd start. He was 3-4 against the Cardinals in eight games. Raffensberger had lasted only three innings in his last start against St. Louis, on August 19.

This game figured to be a pitching duel from the onset. The first two innings went by quickly, with only a single by the Cardinals’ Vern Benson, who was erased on a double play. With one out in the St. Louis third, Del Rice singled to center. Lanier followed with a single, also up the middle. After another out, Red Schoendienst doubled, and Rice scored the first run of the game, staking Lanier to a lead.

Through the first five innings, manager Luke Sewell’s Reds were held hitless by Lanier. The lone blemish on the scorecard was an error by Cardinals shortstop Solly Hemus that allowed rookie Wally Post to reach first base in the bottom of the fourth. Johnny Pramesa started the sixth inning for Cincinnati with a single to center. Raffensberger bunted him to second, and Bobby Adams walked. After Johnny Wyrostek flied out to center, Post banged a Lanier offering over the left-field barrier, giving the Reds a 3-1 lead. It was the first of Post’s 210 career home runs.

Raffensberger was perfect from the fourth through the seventh, setting down every batter he faced and striking out Benson, Billy Johnson, and Stan Musial. But in the top of the eighth, after Chuck Diering grounded out, Rice laced a double to right. Manager Marion inserted Peanuts Lowrey as a pinch-hitter for Lanier. Lowrey came through with a single to center, driving in Rice. Hemus forced Lowrey at second for out number two. But back-to-back singles by Schoendienst and Musial brought Hemus home with the game-tying run. The Cardinals had runners at first and second in the top of the ninth but could not score, so the game went into extra innings.

Al Brazle came on to pitch for the Cardinals in the bottom of the eighth inning. Lanier had gone seven innings, allowing three runs on two hits and a walk. Brazle had five previous appearances against Cincinnati, including two starts. In 26⅓ innings pitched against the Reds in 1951, he had allowed only five earned runs. His two starts were both complete games; he struck out 10 Reds batters while limiting them to a total of eight hits in the 18 innings. Now on as a reliever, he held the Reds to three hits as he cruised through the next six innings. No runner even reached second base.

However, in the bottom of the 14th, “Brazle walked Ted Kluszewski to start digging his own grave.”6 Bob Usher sacrificed Kluszewski to second. Brazle intentionally walked Connie Ryan. After the runners advanced on a wild pitch (this was Brazle’s first and only wild pitch of the season, in which he made 56 appearances), Brazle “walked Danny Litwhiler purposely to fill the bases.”7 Litwhiler was pinch-hitting for Roy McMillan, and after he walked, Lloyd Merriman came on as a pinch-runner (probably to prevent a double play). After the three bases on balls came the bang. With one out, Pramesa swung at Brazle’s second offering and “unloaded his sixth homer over the left-field fence,”8 the “final exit-opening smash of the 1951 campaign.”9 As Brazle watched the ball disappear beyond the fence, he earned his first defeat of the season at the hands of the Reds. Four of Cincinnati’s seven runs were due to bases on balls, and all seven were driven in by Post’s and Pramesa’s homers.

Raffensberger’s 16 wins led the team in 1951 (tied with Ewell Blackwell). The decision was his fourth consecutive win, and his ERA dipped to 3.44, its lowest of the season. The complete game was his team-leading 14th of the season. Willie Ramsdell had also pitched a 14-inning complete game for Cincinnati, beating the Brooklyn Dodgers, 5-4, on August 3. The two 14-inning complete games by Raffensberger and Ramsdell were the longest of the 1951 season for the Reds.

Cincinnati’s victory over the Cardinals was the second in a four-game win streak. It meant nothing in the standings, but perhaps it gave Reds fans hope for a better next year.

4 Lanier was one of the players suspended for five years by Commissioner A.B. “Happy” Chandler for jumping to the Mexican League in 1946. After Lanier and other players sued in federal court, challenging baseball’s reserve clause, the suspensions were dropped. Lanier returned to the Cardinals in 1949 after missing the 1947 and 1948 seasons.

5 In December 1951, St. Louis traded Lanier and Chuck Diering to the New York Giants for Eddie Stanky. Released by the Giants in 1951, Lanier returned to St. Louis, this time to pitch for the American League Browns.