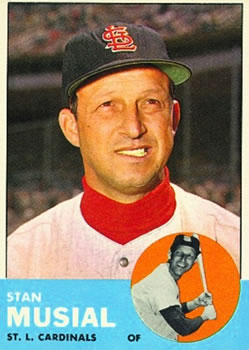 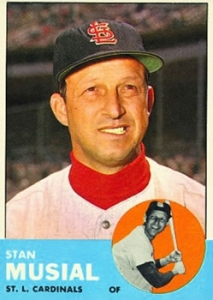 After Stan Musial’s official announcement on August 12, 1963, that this would be his last season as a player, he was showered with appreciation in the seven National League cities he played at in August and September: Los Angeles, Houston, San Francisco, Philadelphia, Pittsburgh, Cincinnati and, finally, Chicago in late September.1

As Musial’s illustrious 22-year career came to an end, fitting tributes honored one of the best hitters in baseball history and a man whose integrity was of the highest order. The legend said goodbye to the ballparks and cities he had spent so much time in over the years and to the fans who watched him play. Two weeks before the Chicago series, on September 10, he even became a grandfather; the 42-year-old was ready for the next phase of his life.

His announcement and subsequent retirement tour seemingly invigorated the Cardinals. They made a run at the NL pennant, going 27-8 over the first five weeks after the announcement but could not catch up to the Los Angeles Dodgers.

The Cardinals eventually succumbed to Sandy Koufax and the Dodgers during the season’s final two weeks. They were mathematically eliminated from the pennant race on September 24 with a 6-3 loss to the Cubs. This allowed Musial – and the team – to loosen up for his Chicago farewell ceremony at Wrigley Field on September 25 and the full-on weekend celebration at Busch Stadium – known as Sportsman’s Park for the majority of Musial’s career – culminating on September 29, the final Sunday of the regular season.2

The Cubs and the City of Chicago were well-prepared for the occasion. Wrigley Field was the perfect host for Musial’s final career road game. He played in over 200 games there under the sun, dating back to 1941. It was the site of his famous pinch-hit 3,000th hit in 1958 as well as the 1947 and 1962 All-Star Games. Musial tallied 492 hits against the Cubs in his career.

A crowd of 11,564 came out to see “The Man” and for the Cubs’ last home game of the season.3 The night before, Ernie Banks invited Musial to speak at a function at the Better Boys Foundation. Banks told the boys, “Musial was my idol. I tried to pattern myself after him.”4

Following a pattern set by previous cities, there was a special pregame ceremony before the 1:30 P.M. game. Musial was gifted a shotgun from Charlie Grimm and the Chicago Cubs Organization and a sterling silver bowl from Broadcaster Jack Quinlan and WGN Radio; the Chicago Chapter of the Baseball Writers Association gave a $100 bond for his new grandson.

The Chicago Tribune reported, “He received many honors, strode to the mike, then showed 11,564 fans what a real man is like.” Musial accepted the gifts and lauded Chicago, its fans, the Cubs youth movement and Wrigley Field as being a “haven for day baseball.”5 He also apologized to his teammates, who “are getting tired of listening to me make speeches every place we go. Only one more, fellows!” He walked along the Wrigley brick wall, shaking hands with fans.6

The game’s starting pitchers were Ernie Broglio for the Cardinals and All-Star Larry Jackson for the Cubs. In the top of the first, Musial popped out to the catcher, Merritt Ranew.

The Cardinals went ahead in the second. Bill White singled with one out. One out later, catcher Dave Ricketts, in his major-league debut, struck out but reached first on a passed ball, advancing White to second. Dal Maxvill singled White home.

The Cubs answered with a Ken Hubbs home run in the bottom of the second, tying the score 1-1. In the top of the third, Cardinals owner August Busch Jr. relayed by phone to Wrigley Field that Musial had been named a Cardinals vice president.

The Wrigley Field public-address announcer revealed the news to the crowd as Musial came to bat. Musial would dig in at the plate as a grandfather, with his number already retired, and as the team’s new vice president. He struck out. He was quickly removed from the game, replaced by rookie Corky Withrow in left field. Withrow, coincidentally, became a father on the same day Musial became a grandfather; he was amid a “cup of coffee” and would end his career hitless in nine at-bats.

Musial left Wrigley Field soon after the at-bat in a Chicago Fire Department car with police siren escort for a meeting at Chicago City Hall with Mayor Richard J. Daley and other dignitaries. Musial presented an autographed baseball to the mayor and, in return, received small Chicago flag and a medallion declaring him an honorary Chicago citizen. Daley said, “This is a token of the love and affection Chicagoans have for you and what you stand for – a great American and a great athlete.” Musial replied, “I have always liked Chicago, I like Wrigley Field and I like daylight ball.” Musial, while sitting in Daley’s chair, jokingly gave all Chicago employees the day off.7 Daley vetoed the notion.

Back at Wrigley Field, the Cardinals scored two runs in the top of the fourth on Bill White’s single and a home run by Doug Clemens. The Cardinals stretched their lead further in the seventh: Broglio singled, Curt Flood tripled, and Dick Groat singled, knocking pitcher Jackson from the game. In the bottom of the eighth, the Cubs’ Ron Santo walked and scored as Ken Hubbs hit into a fielder’s choice. The Cubs lost 5-2 and sent the Cardinals home a winner on the train out of Chicago.

The Cubs were heading north to Milwaukee for their final series of the season, where Santo needed eight assists to tie the season record for National League third basemen. The Cubs were trying to finish over .500 for the first time since 1952.8 Santo ended up breaking the modern National League record with 374 assists and he would set the all-time league record in 1966 with 391. This helped the Cubs improve as a team throughout the 1960s – but they always fell short.

The Cubs’ standout player of the September 25 game was Ken Hubbs. The 1962 Rookie of the Year winner drove in both Cubs runs, homered, walked, and recorded five assists and a putout in the field. That home run would be his last career hit. The sharp-fielding second baseman was playing the last few baseball games of his life. He was the first rookie to win a Gold Glove Award. The well-liked, blossoming 21-year-old died in a plane crash during the offseason. Second-base umpire duties were executed by Hall of Famer Al Barlick. In total, five future Hall of Fame inductees took part in this game – as did sports labor pioneer Curt Flood. Ernie Banks did not play, in favor of rookie John Boccabella.

Another harbinger of things to come: Cubs right fielder Lou Brock had not yet broken out as a complete ballplayer. The next June he was traded for this game’s starting Cardinals pitcher, Ernie Broglio. That trade would go down as one of the most lopsided in sports history. Brock was elected to the Baseball Hall of Fame in 1985. Broglio was out of baseball less than three years later.

As the 1963 season concluded, however, all attention was on Musial. The City of St. Louis had tributes waiting for the final weekend: spreads in the newspaper, a television special, and a Sunday ceremony with the game’s top brass speaking. But first Musial needed to attend his first meeting as an executive on Friday, trading a uniform for a business suit.

The passing of time sometimes offers strange anecdotes when woven into the national pastime. But this day at Wrigley Field undoubtedly belonged to Musial. The celebration in Chicago was a pleasant precursor to the much larger festivity that occurred in honor of Musial when he returned home to St. Louis. There and then, Musial stood as baseball’s happy warrior, as baseball’s perfect knight.