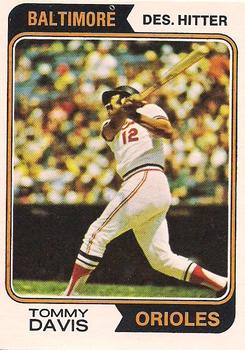 On Wednesday evening, September 25, 1974, Ralph Houk was managing an aging Tigers squad trapped in last place in the AL East at 71-83, 12½ games behind the first-place Orioles. The season’s high point had come the previous night. Al Kaline reached “his promised land,” becoming the 12th player to get 3,000 hits.1

Earl Weaver’s 1974 Orioles played “Moneyball” decades before it became trendy.2 The Orioles were on a tear, having won 21 of their last 27 games, coinciding with the disintegration of a large Red Sox lead. The night before, the Orioles had taken first place in the East by defeating the Tigers 5-4 and taking a half-game lead over the Yankees with a record of 84-71. The Orioles were in position to win their fifth division championship since the playoff era commenced in 1969.

Orioles left-hander Ross Grimsley, winner of four of his last five decisions, took the mound against the Tigers in search of his 19th win against 13 losses. Grimsley became an Oriole for the 1974 season in an offseason trade with the Reds. A free spirit, “he preferred to wear his black hair long and curly, and he didn’t always like to shave.”3

At 33, Tigers starting pitcher Mickey Lolich’s physical appearance hid an enormous talent. “All the fat guys watch me and say to their wives, ‘See, there’s a fat guy doing okay. Bring me another beer,’” he once said. Lolich had a 16-19 record and was closing in on 300 innings pitched. He had come into the season with a figure of 20 as a goal and “[F]ortunately for his peace of mind, (he) didn’t realize how accurate his premonition was.”4

Grimsley set the Tigers down in order in the top of the first. With two outs in the Orioles first, Bobby Grich walked and stole second. Lolich stanched the rally with Tommy Davis grounding out to Aurelio Rodriguez at third. The Tigers jumped on Grimsley with three runs in the second. Bill Freehan started the rally with a walk. With one out, Leon Roberts singled to Enos Cabell in right, advancing Freehan to third. Dan Meyer, tripled in the left-center gap, scoring Freehan and Roberts and “doubling his RBI total for the month.”5 Rodriguez’s sacrifice fly to Cabell drove in Meyer. Eddie Brinkman grounded out to end the half inning.

With a 3-0 lead, Houk believed Lolich had enough support to win. But Lolich struggled with his command, walking leadoff hitter Don Baylor. Baylor used his speed to score on Brooks Robinson’s double to left. Lolich retired Bob Oliver, Cabell, and Andy Etchebarren on two fly balls and a grounder to third, stranding Robinson at second.

Pitching controlled the action for the next three innings. In the third the Tigers had a rally with two singles by Gary Sutherland and Freehan, but Grimsley struck out Reggie Sanders. In the bottom of the frame with two outs, Grich walked again and stole second base again. Lolich got Davis to ground out again to Rodriguez. Each side went down in order in the fourth. Each managed a single in the fifth.

Leading off the Tigers’ sixth, Kaline and Freehan singled. Kaline scored on Sanders’ single to left. With the Tigers ahead 4-1, Weaver pulled Grimsley for Wayne Garland, who came in with runners on first and second and no outs. Roberts grounded out to Robinson, advancing the runners. Garland intentionally walked Meyer, setting up the resulting double play by Grich and Mark Belanger on Rodriguez’s groundball. Garland dominated the next three innings, holding the Tigers scoreless, “but it really did not look like it would do any good, the way Lolich kept pitching out of trouble.”6

The resilient Orioles cut the deficit to 4-2 in the sixth. Lolich could not get Grich out, walking him for the third consecutive time. Davis cued a single to right. With Grich on second, Lolich retired the next two batters on fly balls to short and left. But Oliver, a late-season acquisition from the California Angels, drove Grich home with a single to Ron LeFlore in center.

The seventh and eighth innings were uneventful. Gene Lamont took over Tigers catching duties in the seventh inning as Freehan fell ill.7 Davis and Baylor singled off a tiring Lolich in the eighth but were left stranded on base.

In the top of the ninth, Meyer grounded out to Garland. Rodriguez and Ed Brinkman flied out to center and left. With a 4-2 lead, Lolich took the mound. Cabell flied out to defensive substitution Mickey Stanley in left as “many in the small turnout of 10,552 began heading home, convinced the Orioles’ tenuous hold on first place had evaporated.”8

Etchebarren smacked a grounder through Rodriguez’s legs that was called a single. Rich Coggins ran for Etchebarren. Pinch-hitting for Belanger, Curt Motton “looked at what appeared to be strike three to everyone in the ballpark except for Joseph Brinkman, the home plate umpire.”9 Motton walked, with Al Bumbry pinch-running. Paul Blair drove a single to left, scoring Coggins. Lolich faced his nemesis, Grich, who walloped a 400-foot drive to deep center field with a look of homer and a win for the Orioles. But from a life as a troubled Detroit youth and in Michigan prisons, LeFlore was referred as “a former professional armed robber.”10 Leflore “raced back to the fence and plucked [Grich’s] drive just as it was sailing over the barrier.”11 Bumbry and Blair tagged to third and second.

With first base open, Houk chose to pitch to Davis. Davis was experiencing a career renaissance with the advent of the designated hitter in 1973. The role “was a job perfectly suited for Davis, a latter-day Wee Willie Keeler, the master of “hit ’em where they ain’t.”12 Davis hit Lolich’s first pitch “off the end of his bat and the soft liner squibbed out to centerfield, agonizedly out of the reach of everyone.”13 The ball “floated over second like a dying quail and then took a tricky hop away from the frustrated [Sutherland] who desperately tried to retrieve it in an effort to cut off the winning run.”14 From center field, LeFlore desperately raced toward the ball. Bumbry and

Blair scored as “the ball bounced only about 10 feet beyond the infield dirt and rolled ever so slowly toward the outfield.“15 As Blair scored the winning run, “Etchebarren led the exuberant charge out of the Oriole dugout.”16 Weaver ran toward the mound to congratulate Davis.17

Davis’s hit kept the Orioles in first place. As a hitter, “Davis can do more tricks with his hands than Minnesota Fats with a cue stick,” quipped a Baltimore sportswriter.18 Houk was incredulous: “What the hell, the ball was not hit that good.”19 Weaver was in awe: “The guy is a magician with the bat, no question about it.”20 Davis exclaimed, “[T]he last time I was that excited was when I was playing basketball in high school.”21

The Tigers were unimpressed as “[Y]ou would have thought the Birds had just clinched a pennant or something the way they reacted.”22 Houk vented, “[T]hat SOB behind the plate beat us. Lolich had Motton struck out, there’s no question about it. It’s the worst exhibition of umpiring I’ve seen in a long time.”23 It was a “manifestation of home-stadium bias.”24 Questioned over his decision to pitch to Davis, Houk “disdained the idea of walking Davis intentionally” because “Baylor’s been hot too.”25 Handed his 20th loss, Lolich asserted that he struck out Motton, with umpire Brinkman’s performance “the worst uninspired game. … He missed pitches that were unbelievable. I guess the pennant race got the best of him.”26 Robinson noted: “It’s a screwy game. A guy jumps over the fence and catches a three-run homer, and you think maybe it’s all over there. But the way things have been happening, you know.”27

The Orioles won the AL East (91-71) but lost to the eventual champion Oakland Athletics in the playoffs. The Tigers ended 72-90 in last place, 19 games behind the Orioles. Lolich ended the season 16-21. For the fourth consecutive season, he went over 300 innings pitched. Garland was used sporadically in 20 games with six starts, going 5-5 with a 2.97 ERA. Davis won the Outstanding Designated Hitter Award,28 finishing with a .289 average and 181 hits, leading the Orioles with 84 RBIs.

As the Orioles and Tigers played that day, in Los Angeles Dr. Frank Jobe operated for three hours on a Dodgers pitcher with an experimental graft reconstruction of the ulnar collateral ligament to repair what was considered a career-ending injury to the pitcher’s throwing elbow.29 The next day, Tommy John began the 18-month rehabilitation back to the majors.

2 The Orioles teams during the Weaver era annually ranked among the best in walks and on-base percentage.

28 The award was renamed for Edgar Martínez in September 2004.