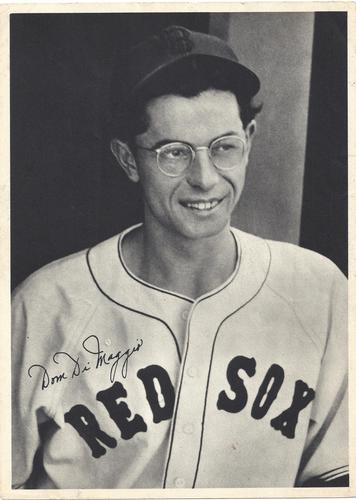 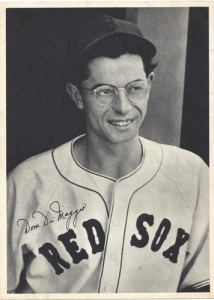 The potent Red Sox lineup of 1940 hadn’t been enough to overcome their own weak pitching. In between four second-place finishes (1938-39 and 1941-42), the Red Sox were mired in fifth place when the team began its final homestand on September 26.

At the plate, the Red Sox were the equal of the first-place Tigers, tied with Detroit for the lead with a .286 team batting average, scoring an average of 5.66 runs per game – barely behind the Tigers – and out-homering all but the Yankees. Boston’s lineup featured four future Hall of Famers: shortstop-manager Joe Cronin,1 second baseman Bobby Doerr, first baseman Jimmie Foxx, and left fielder Ted Williams. Rookie Dom DiMaggio, who would hit .301, had taken over center field from veteran All-Star Doc Cramer, another .300 hitter, who started in right.

The Red Sox’ downfall was pitching. Lefty Grove was about to turn 40 and was a season past his final good one. The top starter, Jim Bagby Jr., was not yet the All-Star he would become with Cleveland. The staff’s 4.89 earned-run average was sixth in the league, better only than those of the sixth-place Browns and last-place Athletics.

Still, Boston left Philadelphia on September 25 having beaten the Athletics twice. Those victories pulled the team out of a stretch of 11 losses in 14 games that had dashed any hope of a late charge. The 16-8 victory on September 24 had been one for the books. The Red Sox had scored seven runs in the sixth inning with a major-league-record seven extra-base hits: four homers, two triples, and a double. A single gave the Red Sox 25 total bases in the inning, an American League record.2 One of the four home runs was by Foxx, the 500th of his career. He became the second player to reach that milestone.

The seventh-place Washington Senators, playing out the string, arrived in Boston from New York for two late-afternoon games on Thursday and Friday at Fenway Park. Washington had lost both games at Yankee Stadium as New York tried to make a run at a fifth straight title. With two runs in the ninth, the Nats3 beat the Red Sox, 6-5, on Thursday. The next day, as Detroit clinched the pennant, beating Bob Feller in Cleveland, and with the Yankees losing to the A’s, Red Sox batters took out their frustrations on three Washington pitchers.4

Veteran lefty Fritz Ostermueller, in his seventh season with the Red Sox, started for Boston. He had won just four games all season, moving between the rotation and the bullpen. Rene Monteagudo, a 5-foot-7 Cuban left-hander, started for Washington. This would be his only full season as a pitcher in the majors, although he resurfaced during the war as an outfielder and pinch-hitter.5

Other than the pitcher, the Red Sox started the same lineup that had taken the field on Opening Day. The Ladies Day crowd, reported as “1,110 paid, 1,100 ladies”6 for the 3 P.M. game, saw Washington take the lead with two runs in the first. Nats shortstop Cecil Travis, given new life when his foul pop was dropped by catcher Gene Desautels, singled in the first run.7 First baseman Jack Sanford doubled Travis home.

A walk and a single put runners at the corners for the Red Sox with no outs in the first, but Williams hit into a 3-6-3 double play. DiMaggio scored to make it 2-1. Neither team scored in the second. The Nats still led by a run when the Red Sox came up in the bottom of the third.

Three singles leading off the inning loaded the bases for Williams. Again, he grounded to first. This time Washington couldn’t turn a double play, and Williams was credited with an RBI. Foxx’s single drove in Cramer and DiMaggio. Cronin’s 24th homer brought in two more, putting the Red Sox up 6-2 after three.

The Senators pinch-hit for Monteagudo in the fourth. Right-hander Lou Thuman, a September call-up, took the mound in bottom of the inning. He walked the number-eight hitter, Desautels, and then the pitcher. Washington second baseman Jimmy Bloodworth booted DiMaggio’s grounder to load the bases. Cramer’s single drove in two. Williams’s single drove in another.

Thuman, who had pitched five innings in his only other 1940 appearance, left the mound for the final time in the majors after walking Foxx. Canadian lefty Joe Krakauskas relieved Thuman with the score 9-2 and the bases loaded. Krakauskas had been a serviceable starter for the Senators in 1939, throwing 217⅓ innings and winning 11 games, but 1940 found him relegated mostly to the bullpen. On this day, he was about to take one for the team.

With Cronin up, a passed ball brought in Cramer with the 10th Red Sox run. Cronin then walked to load the bases again. Doerr walked, forcing in another run. Third baseman Jim Tabor singled, driving in Foxx and Cronin.

After a fly out and a fielder’s-choice grounder, DiMaggio’s single brought in another run. Cramer’s walk loaded the bases again. Williams’s single brought in the final two runs of the inning before Foxx struck out. The totals: five walks, five singles and 10 runs. Six of the runs, five earned, were charged to Thuman. The Red Sox led 16-2 after four. Cronin and Foxx were given the rest of the day off, but the scoring barrage continued.

Krakauskas gave up a solo homer to Doerr, his 22nd, in the fifth, but held the Red Sox scoreless in the sixth and seventh. Left in to bat, the Nats pitcher singled and scored in the seventh. A single by Bloodworth scored George Case with the Senators’ fourth run.

Washington manager Bucky Harris understandably saw no need to waste another pitcher, so Krakauskas stayed in for a fifth inning. It got ugly fast.

Charlie Gelbert, who had replaced Tabor at third base in the sixth, led off with a double. He moved to third on catcher Desautels’ single. Ostermueller, the pitcher, raised his average to .315 with an RBI single. A wild pitch scored Desautels. DiMaggio doubled home Ostermueller, who scored four runs himself, a Red Sox record for a pitcher (at least since 1908).8

After a strikeout, Williams walked. Tony Lupien, who had replaced Foxx, tripled. A fly ball by Tom Carey scored him.9Doerr doubled and scored the final run on Gelbert’s single.

Mercifully, the Red Sox didn’t need to bat again in the bottom of the ninth. Thanks to nine walks, Boston scored a season-high 24 times on 22 hits, 17 of them singles, and 34 total bases. The 24 runs were the most scored in the majors by any team in a 1940 game. The game lasted 2:19.

The Red Sox were not done, however. In doubleheaders the next two days, Boston pummeled the Athletics again, 16-4 and 8-1 on Saturday and 9-4 and 4-1 on Sunday.10 In winning the last five games of the season, the Red Sox scored 61 runs, allowed just 14, and pulled into a fourth-place tie with the White Sox at 82-72.

1 Cronin led Washington to its third (and last) pennant in 1933 as player-manager. In the depth of the Depression, team owner Clark Griffith traded Cronin, by then married to his adopted daughter, after the 1934 season to the Red Sox for $250,000 and Lyn Lary, a far lesser shortstop.

3 Always popularly known as the Senators, Washington was officially the Nationals until the 1957 season; thus the headline-friendly nickname the Nats.

4 Three September 28 newspaper accounts of this game, “Red Sox Win, 24-4, New Season Mark” by James C. O’Leary in the Boston Globe; “Boston’s 24-4 Win Over Nats Is Most Lopsided of Year” in the Washington Evening Star; and “Red Sox Rout Nats, 24 to 4, With Nonstop Hit Parade” in the Washington Post (both “Special Dispatches”) include nothing beyond the game summaries of Baseball-Reference.com and Retrosheet.org.

7 Travis, 3-for-5 in this game, would finish the season at .322, the sixth time in his seven full seasons that he had hit .317 or better. His .359 average in 1941 was second only to Ted Williams’s .406 and his 218 hits led the league. He missed nearly all of the next four seasons in the Army in World War II. He saw combat near the end of the Battle of the Bulge, where he suffered frostbite in two toes. When he returned, he was not the same player and retired after the 1947 season.