In mid-September of 1894, the New York Giants were 3½ games behind the Baltimore Orioles, leaders of the National League. Despite losing only two of its next 12 games (nine wins and a tie), New York did not gain any ground in the standings. So, with only three games left to play (starting on September 27) and numerically eliminated from winning the pennant,1 the second-place Giants traveled to Cincinnati for a season-ending three-game series against the ninth-position Reds. New York won the first game handily, 11-4. About 650 fans turned out for the September 28 contest.2

During the 1894 campaign, Frank Dwyer and Tom Parrott had been Cincy’s two main starting pitchers.3 However, because it was late in the season and Parrott was also a very good hitter (he ended the season batting .323), Reds skipper Charles Comiskey inserted him into the lineup at second base (instead of future Hall of Famer Bid McPhee) and chose right-hander Bill Whitrock to pitch. Throughout the season, Giants player-manager Monte Ward had used Amos Rusie and Jouett Meekin as his primary starters, but in this game he chose righty Lester German. Whitrock made only nine starts for the Reds in 1894 (all complete games), while this was German’s 16th time with the starting mound duties. According to the Cincinnati Enquirer, both pitchers “were hit hard”4 in the ensuing two-hour game.

Singles by New York’s Mike Tiernan, George Davis, Jack Doyle, and Ward, combined with errors by Cincinnati’s Dummy Hoy and Germany Smith, led to three Giants runs in the first inning. Cincinnati responded in the second inning. With two outs, Smith doubled and scored when Parrott laced an RBI triple to right field. New York second baseman Ward took the relay from the outfield but made a wild throw to third, allowing Parrott to score as well.

Hoy singled to lead off the Reds’ third. Bug Holliday drove a two-bagger, plating Hoy and tying the score. Farmer Vaughn singled, sending Holliday to third. An out later, Bill Massey grounded a ball to short, which forced Vaughn, but Holliday scored on the play, giving Cincinnati the lead.

Whitrock had settled down after the first frame, retiring the New York hitters in order in the second and third innings. However, in the New York fourth, back-to-back singles by George Van Haltren and Shorty Fuller, coupled with Massey’s error at third, led to New York knotting the score, 4-4.

Parrott led off the Reds’ half of the fourth by hitting a home run into the right-field bleachers, his fourth round-tripper of the season. Cincinnati had retaken the lead. In the fifth frame, Vaughn knocked a ball to New York third baseman Yale Murphy, whose error allowed Vaughn to end up at third. Bill Merritt lofted a sacrifice fly to center, and Vaughn came home. It was now 6-4 in favor of the home team. Massey and Parrott each singled to keep the rally alive, but neither was able to score.

Massey made another crucial fielding error in the eighth inning, allowing Eddie Burke to reach. Tiernan doubled for a run batted in, and he later scored on Murphy’s single. The two insurance runs put the Giants up by three runs heading into the final inning.

The ninth inning saw New York fail to score, but it produced a rally from the Reds. After Merritt was retired, Massey and Smith drew back-to-back walks. “Every face took on an expectant look when Parrott picked up his club.”6 He had tripled in the second inning, homered in the fourth and singled in the fifth. Sometime between the fifth and ninth innings, Parrott had doubled, but as he didn’t score, the extra-base hit did not warrant mention in the newspaper recaps (although it showed up in the box score). Yet that double meant that the pitcher who was playing second base had hit for the cycle, thereby “cover[ing] himself with glory with the stick.”7 He was a perfect 4-for-4 in the game entering this ultimate clutch situation.

With the first pitch he saw in the ninth, Parrott “made one lunge at the ball, missed it and spun around like a five-cent top.”8 He then sent a high pop fly to shortstop Fuller that deflated his career day at the plate. Whitrock singled to drive in Massey. Jack McCarthy drove a ball to right-center, and Smith scored. So, with two outs, two runners on base and one run needed to tie the game, Hoy stepped up to bat. According to the New York Sun, “A single meant at least a drawn battle, for it was getting too dark to play another inning.”9 Hoy had been successful in three previous at-bats, as “he had earned the password to first with his little bat,”10 hitting three singles, but now, with the game on the line, he also popped out (to second baseman Ward) for the final out of the game. The Giants had prevailed, 9-8.

The two teams combined for 35 base hits. For the visiting Giants, Tiernan, Murphy, Fuller, and the pitcher German each collected three hits. Only Burke, the Giants’ leadoff batter, was hitless. Hoy’s three safeties and Parrott’s four hits for the cycle paced the Reds’ 17-hit attack. Merritt was the lone Reds batter without a hit.

In 1894 Tom Parrott was only in his second season of major-league baseball. In his rookie year, split between the Chicago Colts and the Reds, Parrott played in a mere 28 games, pitching in 26 of them. His record was 10-10 with a 4.48 ERA. Now, in his sophomore season (which was actually his first full season), he pitched in 41 of 68 games for Cincinnati, so it is fair to label him a pitcher. Maybe not a star pitcher, though, as he won only 17 of 36 decisions to go with his 5.60 earned-run average. During the 1894 season, Parrott developed “arm troubles that ultimately shortened his pitching career.”11 That is probably another reason he played second base in this game. Parrott completed 31 of 36 starts, but he allowed 402 hits, coupled with 126 walks, in 308⅔ innings pitched. He played two more seasons (1895-1896) in the National League, and while he was primarily a pitcher in 1895, he played 108 games in the outfield in his final season.12 In his career, Parrott accumulated a 39-48 pitching record (with a 5.33 ERA), but he batted .303.

Parrott took the mound on Saturday, September 29. The Reds bested the Giants, 7-6, in a contest in which the home team batted first. 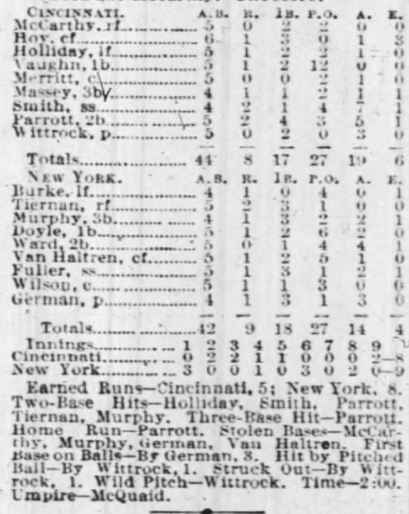 3 Dwyer made 39 starts and Parrott 36. The two hurlers started 75 of Cincinnati’s 134 games (56 percent). In total, 11 different pitchers started at least one game for the Reds.

13 Hassamaer’s feat is not listed at mlb.com. However it is listed at en.wikipedia.org/wiki/List_of_Major_League_Baseball_players_to_hit_for_the_cycle (accessed September 2020). In addition, it is described in a small write-up and box score from the Baltimore Sun. See “Washington 12; St. Louis 3,” Baltimore Sun, June 14, 1894: 6.

15 As of the end of the 2020 regular season, three other batters have hit for the cycle three times in their careers: Bob Meusel, Babe Herman, and Adrián Beltré.

16 “Very Windy.” Even though Cincinnati is listed above New York in the box score, the Giants batted first.