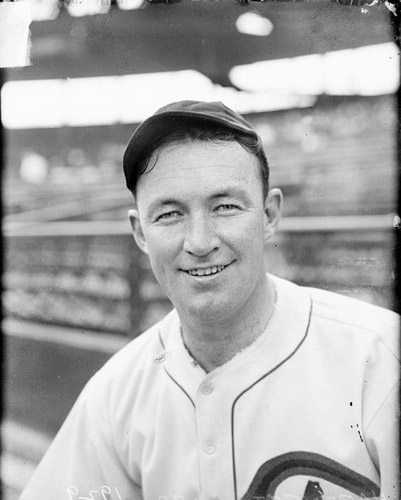 Pittsburgh manager Pie Traynor trudged back to the Belmont Hotel in Chicago wondering what the hell had just happened. Four weeks earlier, his Pirates led the National League by seven games. Fans in Pittsburgh were buying World Series tickets. The club had expanded the press box to accommodate all the writers who would be descending on Forbes Field from all over the country. But now the lead–and, as it turned out, the season–was gone, thanks to one swing of the bat from Gabby Hartnett.

For much of the season, the Chicago Cubs had been the least of Traynor’s concerns. As late as August 20 they were nine games out, in fourth place. In September, though, the Cubs were unstoppable. Heading into a September 27-29 series against the Pirates in Wrigley Field, they had won 18 of 23 games and had charged to within 1 ½ games of the lead. A gutsy 2-1 victory by sore-armed Dizzy Dean in the series opener put Chicago right on the Bucs’ heels.

A raucous crowd of 34,465 jammed Wrigley Field on Wednesday, September 28th as the teams sent two of their best pitchers to the hill for the second game of the series. Traynor went with 30-year-old rookie Bob Klinger (12-5) while the Cubs countered with 19-game winner Clay Bryant. Sloppy defense by the Pirates gave Chicago a 1-0 second-inning lead, and the game stayed that way until the sixth, when things got wild.

Johnny Rizzo homered and Lee Handley mashed a two-run single in the top of that inning to put Pittsburgh ahead, but the Cubs answered with two of their own in the bottom half to tie the game, 3-3. Then in the seventh, the Bucs had Chicago reliever Vance Page in a tight spot when they were bitten by the first of two controversial non-calls. With men on the corners and one out, Rizzo was at the plate with a 2-and-1 count. As Page began his delivery, third-base coach Jewel Ens began screaming and pointing, certain that Page had balked. First-base umpire Dolly Stark flinched, as if he saw something, too–but he didn’t call anything. Rizzo swung at the pitch and grounded into an inning-ending double play. Traynor, Ens, and several players swarmed home plate, screaming at umpire George Barr, but their protests got them nowhere. “[Stark] saw it. Why the hell didn’t he call it?” Ens fumed later.1

The Pirates shrugged that off to score two in the top of the eighth on run-scoring singles by pinch-hitter Heinie Manush and Handley, yet they easily could have had more. With the two runs in, men again at the corners, and this time no outs, Al Todd bounced back to pitcher Bill Lee, who threw home to erase Manush. Then, curiously, Traynor allowed Klinger to bat for himself. It ended in the worst way possible–a 1-6-3 double play. The Cubs were in trouble, but still alive.

Ripper Collins singled to lead off bottom of the eighth, which prompted Traynor to lift Klinger in favor of Bill Swift. But the right-handed Swift, who had pitched a perfect eighth on Tuesday, didn’t have it on this day. After Billy Jurges walked, veteran Tony Lazzeri laced a pinch-hit double to right field, scoring Collins and advancing Jurges to third. With the Cubs’ faithful in a frenzy, Swift intentionally walked Stan Hack to load the bases for Billy Herman. The all-star second baseman responded with a line-drive single to right. Jurges scored to tie the game, but Paul Waner’s throw cut down pinch-runner Joe Marty, heading home with the potential go-ahead run. Traynor yanked Swift in favor of workhorse relief ace Mace Brown, who induced a rally-killing double-play ball off the bat of Frank Demaree.

By the time the Pirates went down against Charlie Root in the ninth, it was around 5:30 p.m. Sunset, according to the Chicago Tribune, was 5:37 p.m. The umpires met between innings and, although it was becoming very difficult to see, decided to squeeze in one more half-inning. “Just 60 seconds and it might have been different,” Traynor said wistfully. “Dolly Stark told me they were going to call it.”2

Brown quickly retired the first two hitters and then jumped out in front of Hartnett 0-and-2. “He made Hartnett look bad on a couple of curves that went down. Then he came back with one more,” recalled Pittsburgh backup catcher Ray Berres. “He was really going to snap one off. And as so often happens when you try too hard, he hung it.”3

Hartnett, the Cubs’ player-manager, was looking for another curve and guessed right. “I felt it was gone the second I hit it,” he recalled.4 At the crack of the bat, Brown buried his head in his arms. He knew it too. In the semi-darkness, the fans couldn’t track the ball very well, but they could see Rizzo edge back toward the wall, and then look up helplessly as the ball landed in the left field bleachers for a game-winning home run. Chicago had prevailed, 6-5. The crowd erupted, a beaming Hartnett was mobbed at home plate by teammates and fans, and the Cubs had taken over first place on what would be forever known (thanks, apparently, to Associated Press writer Earl Hilligan) as “The Homer in the Gloamin’”5

In the Pirate clubhouse, Brown sobbed in front of his locker. Paul Waner stayed by his side all night. “I was so afraid he was going to commit suicide.6” Traynor wasn’t in much better shape. He sat silently for the longest time before getting dressed and making that long, silent walk back to the hotel with his confidant Ens. “I was so wrought up inside I was ready to explode. If Jewel had so much as opened his mouth, I believe I would have slugged him.”7

The Pirates, though down only a half-game were emotionally spent. The Cubs, on the other hand, came into the series finale the next day feeling invincible. “We could’ve beaten nine Babe Ruths,” crowed Herman.8 They crushed the Bucs 10-1, which all but wrapped up the National League pennant.

Traynor, who was fired after one more season, never got over it. Long afterward, he insisted that the umpires should have called the game in the ninth. “I think [years later] he was still very bitter about that,” according to a friend, Chuck Reichblum. “That was probably the biggest disappointment in his life. That was the only time I ever heard him be in any way bitter or regretful.”9 After the World Series, Traynor beat a hasty retreat the woods of Wisconsin, where he spent much of the snowy winter hunting and trying to get away from it all.

Mace Brown never seemed to get over it, either, as Paul Waner related to author Lawrence Ritter. “He can laugh about it now, practically 30 years later. Well, he can almost laugh about it anyway. When he stops laughing, he kind of shudders a little bit, you know, like it’s a bad dream he can’t quite get out of his mind.”10