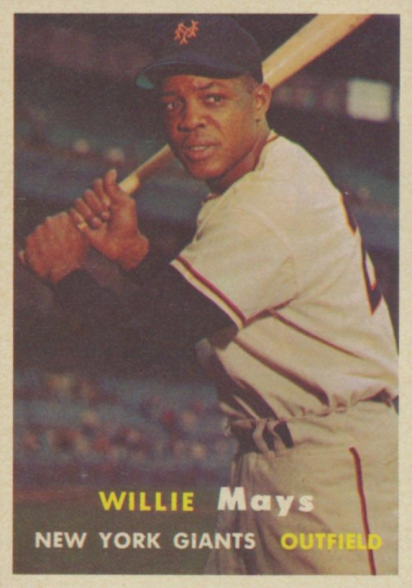 At Stoneham’s invitation, Giants of the past gathered in New York the night before the final game and reminisced. Among them were Jack Doyle, age 87; Hooks Wiltse, 78; Hans Lobert, 75; Red Murray, 73; Larry Doyle, 71; and Rube Marquard, 70.2

Fred Engel, 82, recounted his time as a team mascot in the 1880s. His favorite Giants were John Ward, Jim O’Rourke, Mickey Welch, and manager Jim Mutrie. Welch, the pitcher who won the first Giants game in 1883, liked to sing about food and beer, said Engel. And Mutrie was quite a showman: “He would arrive at the park dressed formally — high hat, tails and all — and parade around the park shouting, ‘Who are the people?’ Without waiting for a reply, he would scream, ‘The Giant fans are the people!’”3

On Sunday, September 29, the last day of the 1957 season, the Giant fans were sad people. As if attending a funeral, 11,606 of them came to the Polo Grounds to grieve and bid their team farewell. The game against the Pittsburgh Pirates was secondary.

During the pregame ceremony, about 20 former Giants were introduced, including the old-timers mentioned above, and a bouquet of roses was given to Blanche McGraw, the 74-year-old widow of longtime Giants manager John McGraw. She was introduced as “the First Lady of the Polo Grounds.”

On this day of nostalgia, Bill Rigney, the current Giants manager, fielded a lineup in which seven of nine starters were members of the 1951 or 1954 NL-champion Giants. George Levy, 81, announced the batteries using a megaphone, just as he had done in 1924: “Ladies an’ gentulmen — Battrees for to-day’s game — for Noo Yawk: Antonelli, pitchin’; Westrum, catchin’; for Pittsburgh: Friend, pitchin’; Peterson, catchin’.”4

It was a battle of also-rans. The Giants were in sixth place. The Pirates were tied with the Chicago Cubs for seventh. Left-hander Johnny Antonelli and right-hander Bob Friend had lost 17 and 18 games, respectively, during the season. In the National League, only Robin Roberts of the Philadelphia Phillies had lost more.

The game began at 2:00 p.m. on a pleasant afternoon with the temperature in the low 60s. The Pirates’ Gene Freese led off with a single, and Bill Mazeroski followed with another. Dick Groat lined the ball into the hands of Whitey Lockman at first base, who stepped on the bag for an unassisted double play. Freese scored when Bob Skinner catapulted a triple to center field. Skinner tried to make it an inside-the-park home run but was thrown out at the plate by a strong throw from the Giants center fielder, the incomparable Willie Mays.

In the bottom of the first inning, Don Mueller singled and moved to third base on Mays’ single. Dusty Rhodes sent a fly ball to center field, where it was caught by Roberto Clemente. Mueller tagged up and made it home ahead of Clemente’s throw to catcher Hardy Peterson. As Mays headed for second base, Peterson threw to Mazeroski, the second baseman, who tagged Mays out.

Frank Thomas led off the top of the second inning with a home run into the left-field stands. Clemente doubled and John Powers was hit by a pitch. Peterson singled to right field, scoring Clemente and sending Powers to third base. Peterson, though, was thrown out trying to stretch it to a double. Powers scored on Friend’s single, and the Pirates led, 4-1.

After allowing four runs on seven hits in two innings, Antonelli was replaced by Curt Barclay, a rookie right-hander. The Pirates scored two runs off Barclay in the fourth inning, with singles by Clemente and Friend and a double by Powers. In the sixth inning, consecutive singles by Clemente, Powers, and Peterson produced another run. Meanwhile, Friend silenced the Giants offense. Mays got his second hit of the day, a single in the seventh inning, but did not score.

The Pirates tacked on two more runs, getting one in the eighth on Friend’s single and Mazeroski’s double, and another in the ninth on Powers’ home run, a mammoth shot off right-hander Ramón Monzant. The powerful blast sailed over the roof in right field, close to the foul line.

Friend was still going strong as the Giants came to bat in the bottom of the ninth. Mueller flied to Powers in right field for the first out. Then Mays stepped to the plate. The fans gave him a standing ovation, realizing this was his final at-bat as a New York Giant. Though he grounded weakly to Friend and was easily thrown out, the fans continued their applause. Mays said later, “With the crowd cheering me and everything, it was the only time in my entire career I could feel the bat shaking in my hand.”5

Rhodes made the final out on a grounder to Groat, the shortstop. The final score was Pirates 9, Giants 1. Friend allowed six hits in his complete game. It was his “bachelor’s party,” said the Pittsburgh Post-Gazette, because he was set to get married the next day.6

The New York Times called the game “an inelegant thrashing.”7 But “inelegance” understates what happened immediately after the game. As soon as the final out was made, fans rushed onto the field. The players fled to the clubhouse in center field, ahead of the mob.

Fans ran amuck in a frenzy of souvenir collecting. They took the bases and pitcher’s rubber; demolished the wooden bullpen shelter; tore pieces of foam rubber off the outfield fences; scooped up dirt from the infield; and pulled sod from the outfield. Several teens pried the bronze plaque off the Eddie Grant memorial monument, but the police were able to recover it. At one point, the fans chanted in unison, “We want Stoneham, with a rope around his neck!”

Sportswriter Morris McLemore witnessed the ugly scene. He said he was born a Giants fan but wished he “hadn’t shown up for the last twitches of a dying tradition.”8

Mrs. McGraw watched the devastation from the stands. “It would have broken John’s heart,” she said.10