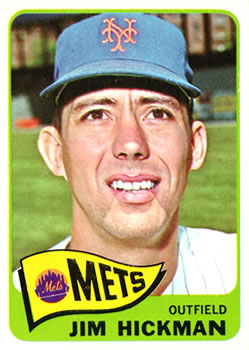 Left hander Ray Sadecki started for the Cardinals. Sadecki entered the game with a 4-11 record but had won his last outing. He struggled against the Mets when he faced them on August 21, lasting only two innings in the Cardinals loss.

Sadecki started out strong, retiring the Mets in order in the first. After he struck out the first two batters in the second, the Mets’ Jim Hickman jumped on a first-pitch fastball and sent it over the right-center-field wall into the bleachers. Hickman’s home run was his 10th of the season and it gave the Mets a 1-0 lead.

Hickman had started his career with the Cardinals but went to New York in the 1962 expansion draft. He never played at Busch Stadium during his time with the Cardinals. Although Hickman said he was not angry about being sent to the Mets, he always felt good about playing in St. Louis. “I always see the ball good here, the lights are good and that’s one reason I always wanted to play here,” he said after the game.1

Mets manager Wes Westrum went with one of his younger lineups for this game. He chose 21-year-old rookie left-hander Dick Selma to start. Selma had been playing for the Class A Greenville Mets most of the season. After a brief stint with the Triple-A Buffalo Bisons, he was brought up by the Mets for the final month of the season.

His batterymate was 19-year-old Greg Goossen, who had spent most of the season with the Class A Auburn Mets before getting a call-up in September. Another rookie, Cleon Jones, started in center field.

Selma pitched well for the first three innings. Bobby Tolan led off the Cardinals’ first inning with a single but was caught stealing to cancel out the scoring threat. Selma walked Dick Groat with two outs in the second but Tim McCarver fouled out and the Cardinals lost another opportunity to score. He retired the Cardinals in order in the third on three groundouts.

The Mets built on their lead in the top of the third. Goossen led off with a single. He was forced at second on Selma’s groundball. Selma reached second on a groundout and scored when Roy McMillan singled to left field to stretch the Mets’ lead to two runs.

With one out in the fourth, Hickman came to bat for the second time. After watching three pitches go for balls, he connected on another fastball. This one sailed over the left-field bleachers for his second home run of the game and gave the Mets a 3-0 lead. Asked later if he was guessing about the pitches during his at-bats, Hickman said, “No, I was just swinging, just swinging.”2

Hickman continued to “just swing” his bat in the fifth. After Sadecki walked Ron Swoboda, Hickman hit his third home run of the game. This one, a 400-foot blast, “shook up the hot dog stand atop the left field bleachers.”3

Down 3-0, St. Louis scored two runs in the fourth inning. With two outs, Selma walked Ken Boyer. Bill White homered and the Mets lead was cut to one run. Selma got through the fifth inning unscathed, but everything unraveled for him in the sixth.

Curt Flood, Lou Brock, and Boyer led off with singles. Flood scored on Boyer’s hit, and Westrum wasted no time in sending Selma to the showers. He brought in Gordie Richardson, who had been traded to New York by the Cardinals the previous season. Richardson got the side out without any more scoring.

Richardson then retired 10 of the next 11 batters he faced. The Cardinals’ only baserunner was Mike Shannon in the seventh, but he was stranded after the next two batters popped out. “I feel better when I beat the Cardinals,” Richardson said after the game. “I thought I did a good job for them last year and I was certainly surprised when they traded me.”4

The Mets added an insurance run in the seventh when after Richardson struck out the next three batters singled off Sadecki. Schoendist replaced Sadecki with Don Dennis, who gave up a single to Charley Smith to bring home the sixth Mets run.

Hickman got one final chance to make history in the eighth. If he could hit another home run, he would join an elite group of players and become just the eighth major leaguer to hit four home runs in the twentieth century. Willie Mays was the last player to do it when he hit four round-trippers in leading the Giants past the Braves on April 30, 1961.5

By this time, Cardinals right-hander Nelson Briles had replaced Dennis on the mound. Briles missed the plate on the first pitch. Hickman fouled off the second. Then he hit the third pitch. It was a sharp grounder that took a bad hop past the third baseman for a single.

“I had a good cut at the ball that I fouled off, but the one I got a single on was in on me and I got on top of the ball,” he said later. It brought his string of home runs against the Cardinals to an end at four; he had homered in his last appearance against the Cardinals, on August 22, to help the Mets win 7-5.

Although Hickman failed to get his fourth home run, he did make Mets history, becoming the first Met to hit three in a game. He also became the Mets home-run leader. His third homer was his career 53rd, pushing him past Frank Thomas for the career lead on the Mets. Cardinals fans were last treated to a batting exhibition like this back in 1954 when Stan Musial hit five during a doubleheader.

In addition to the sources cited in the Notes, I also used the Baseball-Reference.com, and Retrosheet.org websites for box-score, player, team, and season pages, pitching and batting game logs, and other material pertinent to this game account.