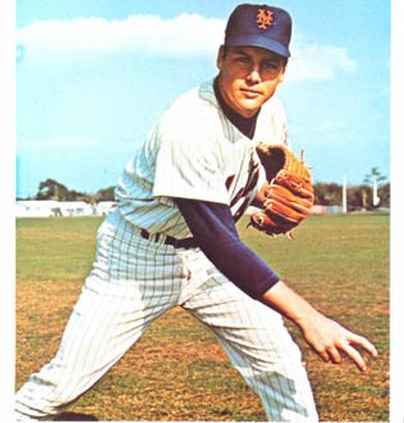 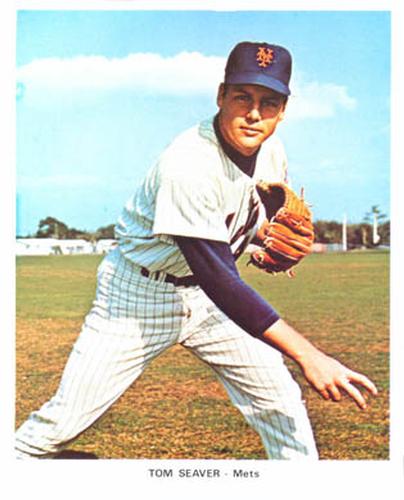 As with so many other games for the man who wore number 41 for the New York Mets, Tom Seaver tallied a victory backed by a double-digit strikeout total on September 30, 1971.

But this last game of the ’71 campaign had another significant value: Seaver reached the milestone of 20 victories in a season for the second time in his career. Afterward, the right-hander revealed his thoughts on win totals: “When a season starts, I think I can win 20. I set that as one of my goals. Another main goal is pitch consistently. If I’m consistent, I’m going to help this ballclub and myself.”1

As the late-night TV commercial narrators used to say: But wait, there’s more.

Seaver’s 13 strikeouts in the 6-1 win against the St. Louis Cardinals put his season total at 289, topping the National League for the second consecutive year. Scoring against the USC alumnus was about as likely as the Room 222 character Jason Allen, played by Heshimu Cumbuka, changing his hairstyle from the popular Afro of the early ’70s to a crewcut. In 1970, Seaver’s 2.82 ERA led the NL. For ’71, he led the majors with an outstanding 1.76.

Seaver’s nighttime odyssey of power pitching at Shea Stadium began with strikeouts of Lou Brock and Luis Melendez in the top of the first. Three more whiffs in top of the second and striking out St. Louis pitching counterpart Daryl Patterson in the top of the third gave Seaver a half-dozen entries in the “K” column.

Milt Ramirez and Melendez were prey for the second time of the game in the top of the fourth; Patterson struck out again an inning later.

St. Louis had effective pitching as well at the beginning of the contest. Patterson allowed walks to Bud Harrelson and Cleon Jones in the bottom of the first inning, but they were the only Mets to reach first base through four innings. Singleton’s solo homer began the bottom of the fifth and broke the scoreless tie. But the bottom of the sixth saw the Mets accumulate runs the way an expert pinball player racks up points.

It didn’t start with promise, though.

Harrelson’s groundout to Cardinals third baseman Julian Javier and Joe Hague’s putout of Mike Jorgensen’s grounder at first base gave Patterson some breathing room. But Jones doubled and Patterson, for reasons passing understanding, walked Ed Kranepool to pitch to Singleton. Whatever the strategy, it didn’t work. Singleton homered for the second time in the game, making the score 4-0.

Grote went 2-for-4, getting the hits in the bottom of the fifth and sixth innings.

Seaver added strikeouts number 10 and 11 in the top of the seventh – Hague and Jorge Roque. He notched two more K’s in the top of the eighth, moving closer toward his fifth shutout of the season. But the St. Louisans scored their only run when Jose Cruz tripled and scored on Brock’s double. It was the 200th hit of the season for Brock, who received credit from Seaver for his aplomb: “God bless him. I didn’t give it to him. He got it on his own. Naturally, I didn’t want to lose a shutout.”2

Harrelson also praised Brock. “I was glad to see Brock get 200 because he earns it. He hustles all the time. He gives everything he has. Oh, 199 hits would be fine, but 200 puts him in another class.”3

Singleton got his third hit in the bottom of the eighth, leading off with a single. But Garrett’s grounder to Hague resulted in a force at second. With the two home runs, Singleton increased the Mets’ total to 98 for the season.4 New York ended the game with eight hits, four coming in the explosive sixth inning.

St. Louis also had a hitter with a prominent night, accounting for three of the team’s seven hits. Second baseman Ted Kubiak, who had come to the Gateway to the West in a five-player trade with the Brewers in late July, went 3-for-4: two singles and a triple. His three-bagger brought his season total to seven – five in a Milwaukee uniform and two as a Cardinal.

When September began, fans of the orange and blue moaned about a .500 record: 66-66. A five-game winning streak returned optimism to Queens. The Mets finished the month with a 17-13 record and the season with a third-place tie in the NL East; Chicago also had an 83-79 record.

St. Louis had a five-game winning streak and a 7-3 record in the last 10 games before facing Seaver on the last day of the season.

Nobody knew it at the time, but this contest was the last for Gil Hodges as New York’s manager. The Brooklyn Dodgers great had piloted the Washington Senators from 1963 to 1967 and joined the Mets in ’68. His no-nonsense approach lifted the team to become World Series champions the following year. Right before the ’72 season, Hodges died of a heart attack.

Getting the victory was a nice way for Seaver to punctuate his rebound. He went 1-4 in July and compiled a 9-3 record across August and September. But his outstanding output in 1971 was eclipsed by Fergie Jenkins’s in the NL Cy Young Award voting.

Seaver won three Cy Young Awards in his career, but his ’71 loss to Jenkins arouses curiosity. He had a .667 won-lost percentage compared with.649 for the Cubs’ righty and an ERA a little more than one run less: 1.76 vs. 2.77. But Jenkins pitched nearly 40 innings more and led the majors in victories with 24.

Baseball writers chose their top three pitchers with a 5-3-1 scoring paradigm. The voting was 97 to 61 points, but five voters ignored the Mets fireballer. “I feel I pitched better this year than ever before,” Seaver said. “Of course, I know that Fergy was a prominent candidate with his 24 victories. But I thought the voting would be closer.”5

So did Mets fans, especially those who were in the Shea Stadium stands on September 30.