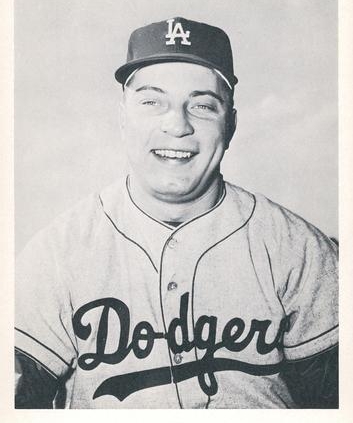 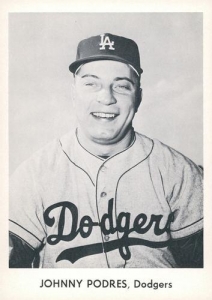 Chicago loaded the bases in the top of the first inning on one-out singles by Alvin Dark and Lee Walls, plus an intentional walk to cleanup hitter Ernie Banks that gave the Dodgers a chance for a double-play grounder. It was a better option than letting the 1958 and 1959 RBI leader swing away.

As it turned out, LA’s defense was not needed.

The mood lifted; it was only the beginning of a dominant performance. Podres’ complete-game victory yielded 14 entries in the “K” column for the southpaw, who ranked sixth among major-league pitchers for strikeouts per nine innings in 1959.1

Podres struck out the side—Bobby Thomson, Cal Neeman, and pitcher Bob Anderson—in the top of the second and notched his sixth consecutive strikeout when he whiffed Tony Taylor to start the third. After Dark’s fly out to left fielder Norm Larker, Podres entered his seventh K of the night when Walls struck out.

Chicago scored its sole run of the game in the top of the fourth. After sending Banks back to the bench on a groundout to second baseman Charlie Neal, Podres walked Moryn and gave up a run-scoring double to Schult. Gil Hodges then caught Thomson’s pop fly in the Coliseum’s foul territory; Neeman got an intentional pass so Podres could face Anderson, who became his eighth strikeout.

The Dodgers evened the score in their turn at bat when Wally Moon, the 1959 major-league leader in triples with 11, smacked a one-out three-bagger and scored on Larker’s groundout to second baseman Taylor.

Moryn kicked off the Cubs’ batting order with a double. Schult kept him in stasis with a groundout to shortstop Maury Wills. Thomson’s infield single to third sent concern throughout those of the 18,439 fans cheering for the Dodgers; Moryn held at second. But after Neeman’s grounder to Podres left runners on second and third with two outs, Cubs manager Bob Scheffing declined to send a pinch-hitter for Anderson, who predictably whiffed and gave the Dodgers’ left-hander a double-digit strikeout total.

Chicago sent the top of the order to the plate to begin the seventh inning, but it didn’t go beyond three batters. Podres struck out Taylor and Walls looking. Dark flied to Larker in left field.

Los Angeles’ offense padded the lead with four runs in the bottom of the seventh. Duke Snider and Neal singled to start the revelry; Dodgers catcher John Roseboro sent them home with a triple and he scored on Podres’ single.

Scheffing relieved right-hander Anderson with southpaw Bill Henry, who trotted to the Coliseum’s pitching mound facing a four-run deficit with the 5-1 score. But he did not fare much better in the Southern California night.

Gilliam singled and moved to second on right fielder Walls’ error; Podres advanced to third base. A passed ball gave Podres the opportunity to score the fifth run of the inning’s barrage. Gilliam sprinted to third base. Henry gave a reprieve to his teammates when Moon’s powerful swing resulted in a fly out to Thomson, patrolling center field

Podres’ 13th and 14th strikeouts came in the top of the eighth: Moryn and Thomson.

Gil Hodges bashed a two-out solo homer in the bottom of the eighth for LA’s final run of the night.

The game provided a well-needed boost for the LA squad, which had lost a doubleheader to Chicago the previous day and entered this day’s action trailing the first-place San Francisco Giants by three games. Dodgers skipper Walter Alston revealed his team’s precarious situation going into the final game of the series. “I don’t think much of our chances if we keep playing like this. But we should be just about ready to bust loose and get some hits.”2

Gilliam and Roseboro had the most productive outings for the squad. Third baseman Gilliam went 2-for-4 and knocked in a run. (In 1959 Gilliam had the fourth highest batting average on the team, behind Snider, Moon, and Neal.) Roseboro had a 1-for-3 night; he notched two RBIs and also scored a run.

Anderson struck out seven in his tenure on the mound before leaving in the middle of the seventh inning. Dodgers fans had felt pangs and twangs of concern when the right-hander finished his warmups; Anderson’s 1959 record against the Dodgers was 4-0 coming into the contest.

Podres’ victory was his 13th of the season. After the game he said, “I thought my fast ball was particularly good for the first six innings. I got a little tired in the last couple of innings. I wasn’t conscious of the number of strikeouts because I was concentrating on getting men out any way I could.”3

Podres allowed six hits and four walks for the visitors from the Windy City. His stablemates showed a fervor for strikeouts in 1959. Don Drysdale led the major leagues with 242; Sandy Koufax smoked 18 Giants a week before Podres’ outing against the Cubs. Alston remarked, “It seems we either strike ’em out or they hit the living hell out of us.”4

Podres ended his ’59 tour with a 14-9 record. This win sparked a 15-5 run for the remainder of the Dodgers’ season, which ended with a tie for the NL lead and a best-of-three playoff against the Milwaukee Braves. It took two games for the Dodgers to secure the pennant; they defeated the Chicago White Sox for the World Series title in six games.

In just their second year in Southern California, the Dodgers gave their new home a championship; Podres won Game Two of the World Series against the White Sox.