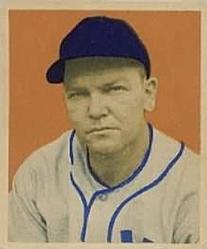 The seventh-place Washington Senators concluded their 1942 Griffith Stadium schedule with what Shirley Povich of the Washington Post called, “a violent batting war” against the Boston Red Sox.1 It was a come-from-behind assault led by two apparently harmless perpetrators.

At one time Jimmy Pofahl was the Senators’ future. Clark Griffith paid a hefty $40,000 to acquire the 22-year-old from Minneapolis in August 1939, and it wasn’t hard to see why. He led the American Association in batting average for a while that season before injuring his wrist, and still managed to hit .302 with 19 home runs.

Washington’s plan for 1940 was to make room for Pofahl by shifting Cecil Travis, a fixture at shortstop, to third base. However, those plans went awry when Pofahl “reported to spring training with a throwing arm more suitable for beanbag than major-league ball,” as Povich put it.2 He did play short that year, but didn’t play it particularly well; worse, he couldn’t hit at all. Pofahl slugged double-digit home runs in three of his four minor-league seasons. With the Senators, he hit two homers in three years. By the time the home finale rolled around in 1942, the erstwhile next big thing was hitting .215 and had been reduced to a utility role, scavenging scraps of playing time wherever he could.

Jake Early’s season had been equally miserable. The witty young man from North Carolina emerged as one of Washington’s most lethal hitters in 1941, batting .287 with 10 home runs in 104 games. Over time, he became known more for what he did behind the plate, dutifully handling the cadre of knuckleballers the Senators employed to get them through the war years and distracting batters with his off-key singing and side-splitting imitations of radio announcers and auctioneers. His 1942 performance, though, inspired mostly groans. He entered the game batting .198 with just 15 hits in his last 34 games.

Only about 1,500 people turned out on a Tuesday afternoon, even though it was scheduled to be a doubleheader as the clubs tried to make up a game that had been washed out in August. A glance at the Senators lineup offered no hint of a looming explosion. No one in the bottom half of the order had an OPS above .635. The fifth-place hitter, John Sullivan, was batting .231 with only 13 extra-base hits, even though he had been the everyday shortstop since mid-June.

Washington manager Bucky Harris turned to rookie Ray Scarborough to make his second career start in the opener. Just five days earlier, Scarborough had blanked the Chicago White Sox on five hits but this outing would unfold much differently. The first five Red Sox reached base against him, with cleanup man Tony Lupien’s single scoring Dom DiMaggio and Johnny Pesky. Lou Finney reached on a fielder’s choice that scored another run and made it 3-0.

Although it was a rocky start for Scarborough, it was better than the fate that awaited Boston’s Oscar Judd. The 34-year-old rookie from Canada entered the game with an 8-9 record and a respectable 3.64 ERA, but his season-long struggles with control proved his doom. Judd surrendered three bases on balls and three singles in the bottom of the first. His bases-loaded walk to Early forced in the tying run and ended his day after just two-thirds of an inning.

Boston tacked on two runs each in the third and fourth innings before the Senators got a couple back in the bottom of the fourth. Mickey Vernon, who entered play with seven multihit games already in the month of September, plated George Case with a single. The light-hitting Sullivan followed with his second RBI of the day, a double down the left-field line that scored Bobby Estalella and brought Washington to within 7-5.

In the top of the sixth inning, with a wobbly Scarborough still on the mound, Boston loaded the bases on an infield hit by pitcher Charlie Wagner and a pair of bunt singles. Ted Williams grounded into a force play to score Wagner, and Finney singled home DiMaggio for a 9-5 lead.

However, the game turned in the bottom of the sixth, as Washington sent 11 men to the plate. Wagner walked the first two batters. One out later Ellis Clary singled to load the bases for Pofahl, who ripped a base hit that drove in two runs and trimmed the lead to 9-7. Joe Cronin summoned his trusty bullpen workhorse Mace Brown to quiet things, but instead Early greeted him with a two-run double to tie the game. A walk to pinch-hitter Bruce Campbell and an infield single by the speedy Case loaded the bases. After Stan Spence tapped back to Brown for a force at home, Estalella dribbled one down the third-base line. Jim Tabor’s throw to first was late and wide, as Campbell scored the go-ahead run and Case tore headlong around third. First baseman Lupien hesitated and his throw home was late. The four-run deficit had become an 11-9 Washington lead.

The Senators scored three more off Mike Ryba in the seventh on a run-scoring single by Pofahl and a two-run double by Early, whose five RBIs matched a career high. Pofahl brought home another run on a fly ball in the eighth, giving him a career-best four RBIs. Alex Carrasquel, who took over for Scarborough in the seventh, was not especially effective but he kept Boston off the board until a two-run double by Pesky in the ninth. With men at the corners, Carrasquel induced Finney to ground into a force at second, sealing a wild 15-11 victory.

Scarborough endured quite a beating, allowing 12 hits and nine runs (eight earned) over six innings, but he hung in long enough to sneak away with the victory. Brown fell to 8-3 for the Red Sox. The game took 2 hours 37 minutes. The umpires called the second game at around 5:00 P.M. with the score tied, 1-1, in the fifth inning, so the teams could catch trains out of town to play out the string.

Jimmy Pofahl played only six more major-league games and a year later he was out of baseball for good. He returned to his hometown of Faribault, Minnesota, where he owned a sporting-goods store for 30 years. Jake Early rebounded to become an All-Star in 1943, helping Washington rise from the second division to a surprising second-place finish.

The author also reviewed the following sources for play-by-play and other information:

Kirkpatrick, Rob. Cecil Travis of the Washington Senators: The War-Torn Career of an All-Star Shortstop (Lincoln and London: University of Nebraska Press, 2005).