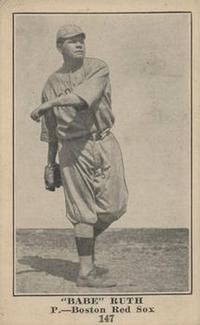 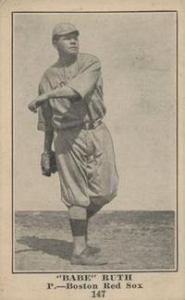 The fans at Griffith Stadium were in for a treat in the first game of the September 9, 1916, doubleheader between the Boston Red Sox and the Washington Senators. The game featured a dream pitching matchup between the veteran Walter Johnson and 21-year-old Red Sox phenom Babe Ruth. It was the fifth time the two had met as opposing pitchers, the fourth time in 1916 and the fifth overall, with the first meeting between the two in 1915. Ruth had defeated Johnson in all five meetings so far. While Johnson had been considered one of the best pitchers in baseball for several years, Ruth was making a push in the 1916 season to join that elite group.

Boston came into the doubleheader with a record of 76-55, placing the Red Sox first in the American League, 1½ games ahead of the second-place Detroit Tigers and 9½ games ahead of Washington, which was in sixth place with a record of 66-64. Boston was in search of its second straight World Series championship, having won the title in 1915 over the Philadelphia Phillies.

The Red Sox were unable to score against Johnson in the top of the first inning.

With one out in the bottom half of the first, Washington’s Eddie Foster hit a ball toward Mike McNally at third base that McNally snared with a nice grab, but he couldn’t throw out Foster, who was credited with an infield hit. Then Foster was thrown out trying to steal second base. Clyde Milan worked Ruth for a walk, and Elmer Smith stroked a double to left field to score Milan and give the Senators a 1-0 lead.

Neither team was able to score in the second inning. In the top of the third Pinch Thomas doubled to lead off for the Red Sox. With two outs and Thomas on third base, a double by Hal Janvrin brought Thomas home and the Red Sox had tied the score, 1-1.

Boston missed another scoring opportunity in the fourth inning when Dick Hoblitzell led off with a double and went to third base on a groundout by Duffy Lewis. Everett Scott attempted a squeeze bunt but missed and Hoblitzell was caught between third and home for an out.

Scott redeemed himself in the bottom of the fifth inning with “one of the greatest plays in the opening game.”1 With two outs, John Henry walked and stole second base. Joe Leonard then “drove a screecher out towards left field which [Boston shortstop Scott] scooped up at the very edge of the grass. The stop itself was a gem, but his snap throw to Mike McNally, who touched Amherst John as he was sliding into the [third-base] bag, was also a beauty play.”2

There were no more scoring opportunities until the sixth inning, when the Red Sox pushed a runner across home plate. Harry Hooper led off with a single and took second when Johnson uncorked a wild pitch. Janvrin popped out to Leonard and Chick Shorten lined out to Milan. Boston first baseman Hoblitzell hit a groundball to shortstop George McBride, who barehanded the ball. Hooper advanced to third, but McBride’s stop temporarily prevented him from scoring.

Aggressive baserunning soon broke the tie. “Then came the bad play of the game as Hoblitzell started to steal. [The catcher] Henry threw the ball to Johnson, who in turn gave the ball to McBride. Hobby [Hoblitzell] was between the lines with Hooper inching his way toward the plate. Hobby was retired, but a few seconds too late for Hooper who was over [across the plate with the go-ahead run] before McBride touched the Red Sox first-sacker.”3

The controversial play of the game came in the seventh inning, when it looked as though the Senators might score the tying run. “Joe] Judge beat out a bunt to Ruth. McBride sacrificed and Henry drove a liner off Ruth’s shins and the ball caromed off towards Hobby [at first]. Ruth covered the bag and Henry was called out by umpire Ollie] Chill when it was plain to all that he was safe.”4 Judge advanced to third on the play, but instead of runners on the corners with one out there were two outs and a runner on third. The next batter, Johnson, popped out to end the threat.

The Red Sox held on and the game ended 2-1. “Ruth pitched rings around Johnson, with the game being won on through Janvrin’s timely two-base hit and the clever base running of Hooper and Hoblitzell,” a Boston sportswriter observed.5

Hoblitzell led the Boston offense with two hits, including a double, while Judge led the Washington offense with two singles. Ruth allowed five hits and kept Washington hitless from the first inning to the seventh. He walked three and struck out three in defeating Johnson for the fifth straight time. Johnson pitched well despite taking the loss. He allowed eight hits and no walks while striking out six.

The Senators came back in the second game to score a 10-inning, 4-3 win over the Red Sox.

“No two games of ball this year on the local soil have been more stubbornly contested and before a great thong,” observed the Washington Post. “[Game] No. 1 [of the doubleheader] was a great pitching duel between Johnson and Ruth, in which the latter was more effective in the matter of base hits, but it must be said [Ruth] received the better of the breaks and the umpiring.”6

“Had Umpire Ollie Chill rightfully called a play on John Henry in the seventh inning of the first game of the bargain day bill between the Nationals and Red Sox yesterday afternoon, the home folks most likely would have had the distinction of winning two games of ball from the world champions. As it was the teams broke even.”7

The Red Sox won 14 of their next 19 games, clinching the American League pennant with a 4-2 win over the Philadelphia Athletics on October 2. Boston went on to its second straight World Series title, defeating the Brooklyn Robins in five games. Washington finished the season in seventh place, 14½ games behind the Red Sox.

As for Ruth and Johnson, they both finished the season with spectacular pitching numbers. Ruth posted a record of 23 wins and 12 losses and a league-leading 1.75 earned-run average.8 Johnson finished third to Ruth with a 1.90 ERA, and he led the league in wins (25), complete games (36), innings pitched (369⅔), and strikeouts (228).9 But the question of who was the best pitcher in the American League no longer had a clear-cut answer.

This is the fifth in a series of Games Project accounts planned to present each of the eight starting mound matchups between Hall of Famers Babe Ruth and Walter Johnson between 1915 and 1918. Johnson had been pitching for the Washington Senators for eight seasons and was an established star before George Herman Ruth, later to be immortalized as Babe, debuted with the Boston Red Sox in 1914 after his contract was purchased from the International League Baltimore Orioles. Ruth, then a pitcher, and Johnson started against each other on eight occasions, starting in 1915 and extending through each of Ruth’s years in Boston except 1919 before his sale to the New York Yankees on December 26, 1919. Although Johnson continued to pitch through 1927, Ruth when he joined the Yankees had already made the transition to the outfield. He and Johnson never again met as starting pitcher opponents after May 9,1918.

This series was conceived as John Fredland was being installed as the new chair of the SABR Games Project Committee. The author appreciates John’s enthusiastic support of the series and suggestions for elements to improve the original concept. The late Jack Zerby, who introduced the author to the SABR Games Project in 2017, assisted with first-review editing.

8 Ruth also led the American League with nine shutouts in 1916.

9 Johnson led the league in strikeouts in 1916 for the fifth straight season.