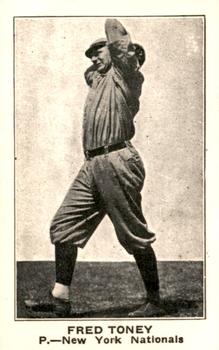 In late August 1921, John McGraw’s New York Giants were 7½ games behind the first-place Pittsburgh Pirates. Pittsburgh owner Barney Dreyfuss was so confident of winning the pennant that he was adding bleacher and grandstand seats for anticipated World Series games at Forbes Field.1 But the Giants swept the Pirates in a doubleheader at the Polo Grounds on August 24, and then won on each of the next three days for a five-game sweep. McGraw’s men were now only 2½ games behind the Pirates.

After the sweep, the Giants went 7-4 in their next 11 games, while the Pirates went 4-5. This left the Giants a half-game behind as they began a three-game series with Brooklyn on September 9. At that time, the Brooklyn nine’s common nicknames were Robins (after manager Wilbert Robinson) or Superbas, rather than Dodgers. The first two games of the series were at the Polo Grounds and the finale at Ebbets Field. The defending National League champion Robins owned a 69-64 record and were 12 games behind the Pirates. While the Robins were out of contention, they could still spoil the pennant chances of their hated rivals, the Giants.

The Giants pitcher in the series opener, Fred Toney, was knocked out in a loss to Brooklyn on September 1, allowing seven hits and three runs in four innings. Toney was reputed to have a sore arm.2 But this time against Brooklyn, Toney was a different pitcher from eight days previous, and his clutch performance led the Giants into first place with a 6-2 win.

Robinson started Leon Cadore against Toney. By his own admission, Cadore was never the same pitcher after his epic 26-inning complete game against the Boston Braves in May 1920.3 His ERA had jumped from 2.62 that season to 4.18 in 1921, entering his start against the Giants; after an ineffective start on August 30, he had not pitched since.

In this game, Cadore faced only two batters — George Burns and Dave Bancroft. Both singled, both scored, and the Giants had a 2-0 lead they never relinquished. Robinson’s choice of Cadore and his almost immediate switch to the left-hander Dutch Ruether were puzzling maneuvers. First, most of Robinson’s starting pitchers were available, including the ace, Burleigh Grimes. Second, the switch to a southpaw didn’t affect the Giants lineup much. Ross Youngs was the only left-handed hitter, while Bancroft and Frankie Frisch were switch-hitters.

The Robins rallied in the second inning, with the help of “dubious work by the Giants infield.”4 The Giants committed three infield errors in the inning, two on throws and one on a groundball. The only Robins hit in the inning was an infield single by center fielder Hy Myers.

With a run in, the Robins had runners on the corners with one out. The next batter was the pitcher, Reuther. By his own testimony, Reuther was a “pretty good hitting pitcher who was often called upon to pinch-hit.”5 His lifetime batting average was .258, with 7 home runs and 111 RBIs in 1,074 plate appearances. He pinch-hit nine times in 1919, for example, and he was certainly not an automatic out. In this case, Toney got him to hit a groundball and the Giants infield came through with a 6-4-3 double play to end the inning, preserving the team’s one-run lead.

The Robins threatened again in the top of the fifth inning, with the Giants still holding a 2-1 lead. Reuther led off with a single. But Toney then induced another 6-4-3 double-play ball, this time from Ivy Olson, thwarting that rally.

Toney drew a walk from Reuther in the bottom of the fifth. The next batter, speedy outfielder George Burns, hit a “mighty triple to right center.”6 Toney scored, and the Giants led 3-1. Burns was caught in a rundown on Frankie Frisch’s groundball, and the Giants missed an opportunity to add to their lead. The third run, however, proved to be the eventual game-winner.

The Robins tallied a run in the top of the sixth to make the score 3-2. Future Hall of Famer Zach Wheat doubled to left to lead off the inning. Myers’ groundout advanced Wheat to third. Ray Schmandt’s sacrifice fly to center field brought Wheat home.

Perhaps the key play of the game occurred in the top of the seventh inning. Catcher Ernie Krueger

began the inning with a double to right field. After Ruether grounded back to Toney, with Krueger holding second, Ivy Olson singled to left field. Krueger headed toward home.

But Meusel, “coming in fast, picked the ball up quickly, threw hard and straight to Snyder, and nipped the slow-footed Krueger at the plate by a step.”7 Jimmy Johnston’s fly ball to right field ended the Robins threat.

The Giants added three insurance runs with a two-out rally in the bottom of the seventh. Burns drew a leadoff walk. After two groundouts, Ross Youngs walked. George Kelly’s single brought a run home. Kelly was caught in a rundown on a delayed steal, but the Robins threw to third in an attempt to pick off Youngs, and Kelly was safe at second. The Brooklyn Eagle account praised a “nicely executed piece of work in which the runners showed speed and intelligence.”8

Youngs scored as Ruether uncorked a wild pitch. Meusel’s “vicious”9 single to left scored Kelly. There was no further scoring. The 6-2 game took 1 hour and 35 minutes to play. A crowd of 12,000 attended at the Polo Grounds.

Toney pitched a complete game for the Giants, scattering nine hits. He did not strike out anyone, and he walked one batter. Two timely double plays, after the infield’s early defensive struggles, and an outfield assist supported Toney’s pitching performance.10

The Giants made the most of their nine hits against the Robins. Three batters were responsible for eight of them. Irish Meusel had a double among his three hits and drove in a run. George Burns had three hits, including a triple. George Kelly had two hits, and drove in two runs of his eventual team-leading total of 122. For Brooklyn, Zack Wheat had a double, and scored both Robins runs.

After the game, the Giants’ record was 83-54. Because Pittsburgh lost a home game to the Cubs, New York moved into first place with a half-game lead over the Pirates. After trailing by 7½ games just 16 days earlier, the Giants were on top to stay; an 11-5 finish closed out their first NL pennant since 1917. The Pirates finished second, four games behind New York.

McGraw’s Giants won the first of four consecutive pennants in 1921. They defeated the Babe Ruth-led Yankees, five games to three, in the World Series. A season later, they swept the Yankees for a repeat title. The Yankees won the 1923 Series in six games. In 1924, the Giants had a tough loss to the Washington Senators in seven games. In any event, 1921 was a banner year for this National League dynasty.

1 Lyle Spatz and Steve Steinberg, 1921: The Yankees, The Giants, & The Battle For Baseball Supremacy in New York (Lincoln: University of Nebraska Press, 2010), 244.