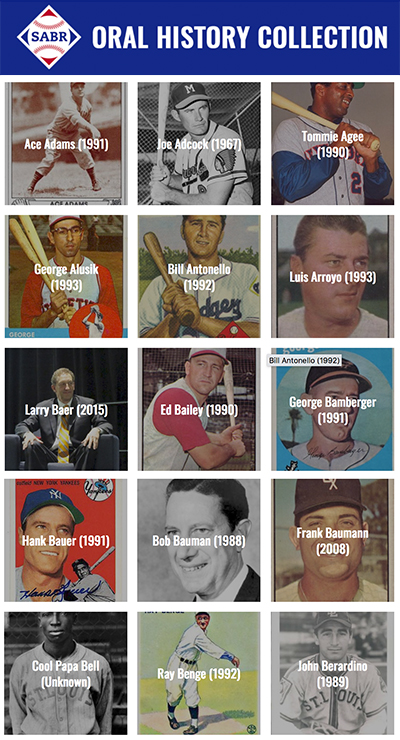 From Carl Hubbell to Buck O'Neil, Johnny Vander Meer to Harvey Haddix, and Richie Ashburn to Jimmy Zinn, the SABR Oral History Collection includes interviews with some of the most memorable players in baseball history.

And now you can listen to those players tell stories in their own voices with our new SABR Oral History Collection website at oralhistory.sabr.org.

These interviews, some of which date back more than 50 years, were conducted by members of SABR’s Oral History Research Committee; many of these recordings were digitized through a collaboration with the National Baseball Hall of Fame Library.

The SABR collection not only includes interviews with prominent players such as Frank Robinson and Yogi Berra, but also special sessions from SABR events, such as Buck O'Neil's inspiring talk during the 1996 SABR Convention in Kansas City, a Seattle Pilots panel with Jim Bouton during SABR 36 in Seattle, and Hall of Fame manager Tony La Russa's one-on-one interview at the 2015 SABR Analytics Conference. We're also proud to make available some interviews conducted by longtime SABR member and former Major League Baseball commissioner Fay Vincent for his series of oral history books, We Would Have Played for Nothing, The Only Game in Town, and It's What's Inside the Lines That Counts.

You can also find special pages for Oral History interviews in our collection with Hall of Famers, Negro Leaguers, broadcasters, writers and researchers, and special interviews from SABR's annual convention.

Founded in 1986, the SABR Oral History Committee has recorded lengthy interviews with well-known and lesser-known players, helping to preserve the historical record and to provide for recollections of baseball history which exist in no other place. Interviews with so called cup-of-coffee players can be as illuminating as interviews with baseball’s biggest names. Such interviews typically explore a player's biography and involvement in notable games in depth, thus allowing for some of the most probing and authoritative accounts in existence. In some cases, the Oral History Committee recording may be the most comprehensive account of a player’s career in existence.