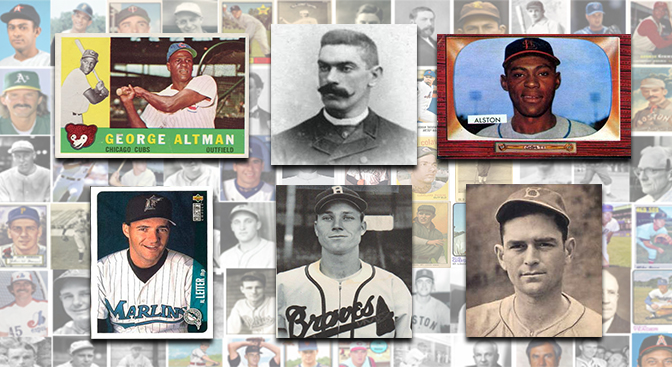 Formed in 2002, the BioProject is SABR’s most prolific and productive research effort, with nearly 600 SABR members collectively contributing as writers, editors, or peer reviewers. Led by co-directors Rory Costello and Gregory H. Wolf, along with vice-chairs Len Levin, Warren Corbett, Bill Nowlin, Lyle Spatz, Emily Hawks, Stew Thornley, Mark Armour, and Jan Finkel, the BioProject is an ongoing effort to produce comprehensive, peer-reviewed biographical articles on every person who ever played or managed in the major leagues, as well as other subjects significant to baseball history. It’s a project that, we hope, will never end.

At SABR.org/BioProject, you can read about anyone in baseball from A (Hank Aaron) to Z (Bob Zuk). Some of our favorite articles produced by the BioProject are of the “cup of coffee” players whose stories are rarely told, such as Eddie Gaedel, the smallest pinch-hitter in major-league history. You can also read about Negro Leagues greats like Martín Dihigo, elected to the baseball halls of fame in four different countries, or stars from the All-American Girls Professional Baseball League, such as Ruth Kramer Hartman of the Fort Wayne Daisies.

We’ve got hundreds of SABR biographies in progress, and we’re adding more every week. We’ve even compiled some of them into books focusing on special teams or themes. More than three dozen BioProject books have been published so far, including our most recent team book on players who have overcome adversity to win the Tony Conigliaro Award. SABR members can download all of them for free at SABR.org/ebooks or buy paperback editions at the SABR Bookstore.

You can also browse all of our biographies by category, to find bios of Hall of Famers or players from a specific team. In addition, we have pages for Broadcasters, Executives, Managers, Scouts, Spouses, Umpires and a lot more on the BioProject website at SABR.org/BioProject.

It’s easy to get involved. Any SABR member is eliglble to write for the BioProject, the Ballparks Project, or the Games Project. If you’d like to help contribute, visit our BioProject Resources page or read the FAQs section to get started. If you’re not a SABR member, visit SABR.org/join to learn more or to sign up for an annual membership.