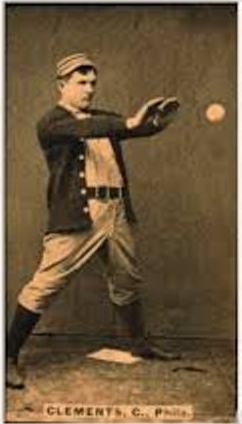 Despite his cumbersome 5’8½” and 204-pound physique and off-putting disposition, Jack Clements was the lone position player to debut in the tumultuous 1884 season and still be active in the final year of the nineteenth century. Like many of the better 19th-century batsmen, including such as Roger Connor, he experimented with switch-hitting before finally settling on swinging almost entirely from the left side in the late 1880s. After breaking in as a lefty hitter, he batted right from August 1884 through June of 1887 before returning to the portside batter’s box, where the July 2, 1887, issue of The Sporting News reported that he had not stood since leaving the Union Association in 1884.

Clements also experimented with catchers’ gloves — which were undoubtedly in short supply since he was a left-handed thrower — before adopting one that Phillies teammate Jack Boyle described in the December 11, 1897, issue of The Sporting News as, rather than a glove with a pocket the size of a BB that other backstops used, “the palm of Clem’s glove is as straight as a shingle” and designed that way so the ball would ricochet off it into Clements’s hand and enable him to be ready almost instantly to throw.

Clements likewise developed a unique chest protector, one that required him to blow it up before every game, and was also known for his trademark “indispensable sweater” that he wore everywhere, even on the bench during hot summer games, ostensibly to protect his throwing arm, although by the late 1890s fellow players thought it was really donned to help him sweat off poundage after he developed a serious weight problem. By the end of his career it is almost certain that he tipped the scales at a significantly higher figure than his listed avoirdupois of 204.

As early as his first ML season in 1884, Clements wore a form of chest protection that sportswriters termed a “sheepskin,” suggesting that it was considerably thinner than the balloon-style protector he later employed. Born in Philadelphia on July 24, 1864, in his major-league debut at age 19 on April 22, 1884, with the local Union Association club, the Philadelphia Keystones, he played right field and went 2-for-6 in a 15-5 win over Baltimore’s Ed Smith. After remaining an outfielder during the first two weeks of the season, he went behind the plate for the first time in Chicago on May 8 and 10 days later reportedly was the first catcher in Cincinnati ever seen garbed in a chest protector when he handled right-hander Enoch Bakely in a game against the UA Outlaw Reds.

According to Clements’s 1941 obit in The Sporting News, the NL Philadelphia Quakers acquired him in August 1884 as the Keystones were about to fold in return for settlement of a $500 claim against the UA club for the lumber used in building their park. In his debut with the Quakers on August 11 he caught the club’s ace, Charlie Ferguson, batted last, and went 1-for-4 in an 8-3 win over New York’s Mike Dorgan at the Quakers’ home ground. He remained with the club until long after it became more popularly known as the Phillies. An erratic hitter with little power initially, he did not really begin to flower at the plate until 1890, his seventh ML campaign, when he posted a .864 OPS with seven home runs. Three years later Clements led the National League in home-run percentage when he went deep 17 times in just 376 at-bats. His figure of 17 also remained a season record for catchers until 1925 when Gabby Hartnett set a new standard with 24.

In 1894 Clements was off to his best start ever until a broken ankle shelved him after just 46 games. He then hit .394 the following year, still the record for the highest average by a catcher with enough appearances to be a batting title qualifier, despite suffering all season from hemorrhoids. In 1896, Clements was batting .359 and fighting off a string of nagging injuries when he was stricken with typhoid fever on a hot August day in Baltimore and missed the rest of the season. His 1897 campaign was equally marred when he grew to hate it in Philadelphia after becoming one of the first victims of the City of Brotherly Love’s famed “Boo Birds.” Although he played much better on the road than at home, he hit poorly overall and seldom appeared after catching on Opening Day.

That November, Clements was part of a huge six-player swap between the Phillies and lowly St. Louis. The 1898 Browns were no improvement on the 1897 bottom feeding Mound City entry, but Clements had one personal memorable highlight. On June 3 at Baltimore he became the first man to catch 1,000 games in the majors when he went 2-for-5 while batting cleanup in a 5-4 win over the Orioles’ Jay Hughes. A .257 final BA and a mushrooming weight problem consigned him to the even more dreadful Cleveland Spiders in 1899 when syndicate ownership swapped Cleveland’s best players from 1898 for St. Louis’s worst. Released early in the 1899 season when he refused to accept a pay cut to $1,500, Clements sat idle until the following spring when Boston hired him as a third-string catcher and occasional pinch hitter. He played in just 16 games with Boston and then spent part of the year with Providence of the Eastern League before returning to the Hub entry for his major-league finale, an unsuccessful pinch-hitting appearance for pitcher Bill Dinneen on October 2 at Boston in the eighth inning of a 7-7 tie with Brooklyn that was called due to darkness.

The February 27, 1901, Sporting Life announced that the Beaneaters had turned Clements over to Arthur Irwin’s proposed Boston American Association entry, a move that had been anticipated ever since Beaneaters manager Frank Selee had acquired minor-league catcher Pat Moran shortly after the New Year, but when the attempt to resurrect the old AA as a rebel major league fell flat, the game’s greatest left-handed catcher then finished his pro career in 1901 with Worcester of the Eastern League, where he hit .309 in 61 contests. Upon his retirement from Organized Baseball, he continued to catch for Philadelphia semipro clubs for several more years according to the September 24, 1904, Sporting Life while working at the A.J. Reach Sporting Goods manufactory in Philadelphia. When it closed he took a similar job in Perkasie, Pennsylvania. Clements died in Norristown, Pennsylvania, of a heart ailment on May 23, 1941, at age 75 after being bedridden for six weeks. He is buried at Arlington Cemetery in Drexel Hill, Pennsylvania.

Casual students of the nineteenth century game can only marvel that Clements’s groundbreaking achievements and overall career performance have never merited even token consideration for the Hall of Fame, especially since his defense seems to have been at least adequate. In all, he caught 1,076 games, 804 more than Sam Trott, second on the list in games caught by a southpaw, and his .769 OPS leads all nineteenth century players who played a minimum of 10 seasons and collected at least 3,000 at-bats while serving as catchers. Yet, for all the records he holds and his many unique distinctions Bill James listed him as no better than the 58th greatest catcher ever and stunningly little is known about his personal life and post-baseball years. The reason for his neglect may simply be that he was not particularly well liked by many of his teammates and was remembered with loathing by legions of young pitchers who debuted with the Phillies during his later years with the team. By the early 1890s Clements had developed an utter disdain for rookie hurlers and would mock their deliveries by catching them barehanded and deliberately returning the ball at their feet whenever they missed his target or threw a pitch he didn’t like. Never seen with anything but a dour look in team pictures, his temperament only got worse as he aged, and it probably is as good a reason as any that the Phillies’ teams in the mid-1890s had so little luck with young arms and such poor pitching in general to accompany what year after year was the strongest hitting club in the majors.

Those with a deeper knowledge of baseball history may wonder why it took Clements so long to mature as a hitter. The answer to that probably lies at least somewhat in Harry Wright’s methods of managing a club. The venerable Wright, who piloted the Phillies from 1884 through 1893, during most of those ten years played a brand of little ball that was out of step with the better clubs and seemed to stifle the progress of not only promising young hitters like Clements and Ed Delahanty but also established hitters like Sam Thompson, who came to the Phillies in 1889 with a reputation for being arguably the National League’s most fearsome slugger but produced much less imposing offensive numbers under Wright’s command, until the aging manager began to cede most of the field control of his clubs to his captains in the early 1890s. As but one example of how anemic offensively Wright’s Phillies teams customarily were, in 1888, even though Clemens hit just .245, he led all of Wright’s regulars in batting, as the club hit but .225 as a whole but nevertheless finished in third place in the National League.

This biography is an expanded version of one that appeared in David Nemec's Major League Baseball Profiles: 1871-1900 (Lincoln, Nebraska: Bison Books, 2011) vol. 1.

In assembling this biography I made extensive use of Sporting Life and The Sporting News, plus assorted baseball-related items and box scores in the New York Times, Washington Post, and Boston Globe for details of Clements’s professional baseball career, 1884-1901, and his subsequent life. His major- and minor-league statistics came from www.baseball-reference.com