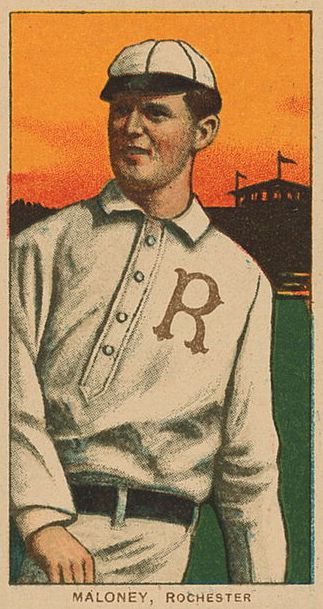 Ballplayers of Irish descent – Hugh Duffy, Wee Willie Keeler, Big Ed Delahanty, John McGraw, et al. – played a major factor in our National Pastime’s surge to ever-greater popularity in the 1880s and the 1890s and the first decade of this century. According to a 1989 article in The Irish Echo, fully one-third to one-half of all major leaguers in the 1890s were of Irish ancestry. Joining those ranks in 1901 was William Alphonse Maloney.

Born in Lewiston on June 5, 1878, Billy Maloney was one of the earliest “college boys” to play in the bigs. Old-time fans are likely to recall Jack Coombs (Colby), Eddie Collins (Colum­bia), Christy Mathewson (Bucknell), and Eddie Plank (Gettysburg) as examples of early players who went directly from college into a major-league uniform. Billy Maloney had them all beat. Upon gradua­tion from Georgetown College (now Georgetown University), he joined the American League Milwaukee team in 1901. There he batted .293 in 86 games. Surprisingly – considering what a speed­ster he was to become in the outfield and on the base paths – he played 72 of those games as the team’s catcher. When the Milwaukee franchise was transferred to St. Louis for the 1902 season, Billy was transferred right along with it. In St. Louis, after a weak start (he was batting .205 after 30 games), he was dealt to Cincinnati in the National League. There, playing mostly outfield, he batted a somewhat more robust .247 in 27 games.

High batting averages were not Billy’s forte. Slick fielding and, especially, base stealing were where he earned his highest marks. It appeared for a while, though, as if he would not get another chance to showcase them. Following his rather unsatisfying 1902 season, he was sent down to Kansas City in the Western League (1903) and then Minneapolis in the American Association (1904). His work in Minneapolis impressed Chicago Cubs manager Frank Selee, however, and Billy returned to the majors – and a starting outfield berth – with the Cubbies in 1905. It would be his best year.

On Opening Day, April 14, Billy held down right field and batted second. He had no hits but, in a hint of what was to come, he walked, stole a base, and scored a run. In May he was moved to the third slot in the Cubs order, where he remained most of the season. He alternated between right and center field, and started to loosen up … and to steal a base almost every game. May 21 was an especial highlight. Bat­ting cleanup, Billy socked a three-run homer over the head of left-fielder Jimmy Sheckard (the man for whom he would be traded 10 months later) in the first inning, propelling the Cubs on their way to an especially appropriate 11-2 romp over Brooklyn.

It was in June, however, that Billy really got going. He began stealing two, some­times three, bases in many a game. In a four-game series with the Boston Beaneaters on June 7 through the 10th he had himself a particularly good time. In the first game, he had two hits, stole two bases, and scored three runs. In the third game, he had one hit, stole three bases, and scored two runs. In the fourth and concluding encounter, he had three hits, stole two bases, and scored one run. Two weeks later Billy again distinguished himself by scoring one run and driving in the other in an 18-inning 2-1 Cub victory over St. Louis. Meanwhile, that he was playing a superb outfield was attested to by the numerous plaudits the New York Times included in its generally rather sparse game summaries. “Maloney made two difficult running catches at centre field” (game of May 13); “Maloney, in the third inning, made an unusually brilliant catch of Mertes’s high ball to right field with his left hand and on a full run” (game of May 16); and “A one-handed catch by Maloney, depriving Titus of an almost sure home run, shut out the visitors” (game of June 21), were among the sterling plays singled out for praise by the Times.

Other plaudits and big games – especially in terms of stolen bases – would follow. But perhaps Billy’s most interesting moment came on August 9… when he was the key ingredient in a scenario that the press of the day thought had never before happened (and that certainly hasn’t happened very often since.) It went this way: in the seventh inning of a game against the Giants, Cub pitcher Bob Wicker led off with a single. Jimmy Slagle drew a base on balls. Billy then beat out a bunt, loading the bases with nobody out. Frank Chance hit a fly to right. Wicker and Slagle stayed close to their respective bases, ready to tag up if the Giants right-fielder, Sammy Strang, caught the ball. But Billy was off at the crack of the bat. When Strang couldn’t reach the ball, Wicker trotted home while Slagle and Billy M., with not more than a step between them, hotfooted it around third and into home. The throw came in, and catcher Roger Bresnahan tagged the sliding Slagle. But there was no way he could get to Billy… who slid under Slagle. After some heated discussion, Slagle was called out and our boy was called safe. Billy had scored on an out at the plate.

By season’s conclusion, Billy had hung up some pretty impressive numbers. Appearing in 145 games, he batted a solid .260, scored 78 runs, drove in 56 others, and tied for the league lead (with Art Devlin of the Giants) in stolen bases with 59. In third place, with 57, was the legendary “Flying Dutchman,” Honus Wagner (who, in his career, tallied 772 total steals and led the league in that category five times.)

The Cubs finished a strong third in 1905. They were on the way to their 1906 success, in which they won 116 games and took the National League crown by a resounding 20-game margin over second-place New York. Unfortunately, though, Billy Maloney was not to be a part of that “Tinker to Evers to Chance” team of destiny. On December 30, 1905 he – along with outfielder Jack McCarthy, third-sacker Doc Casey, pitcher Buttons Briggs, and $2,000 – was shipped to Brook­lyn in exchange for outfielder Jimmy Sheckard.

For the Superbas (as the Dodgers were known in those days), Billy put in three full years. He played in 408 games over 1906, 1907, and 1908 and, although he still patrolled the outfield with the best of them, his batting and basestealing statistics fell off. From 1909 to 1914 his love of the game – even at the minor league level – kept him in it. In chronological order, he played for Rochester (Eastern League), Mobile (Southern League), and Fort Worth, Beaumont, and San Antonio (all in the Texas League). Texas crept into Billy Maloney’s blood. After his playing days were through, he joined Gulf Oil, remaining in the Lone Star State for the rest of his long life. In Texas, he traded his baseball bat for a golf club. Longtime friend and neighbor Robin Rominger of Breckenridge, Texas, recalls that Billy “hit the ball about as straight as anybody I ever saw.” Robin also recalls that Billy, whom he characterizes as a true gentleman, wasn’t much interested in modern base­ball … that he considered any game with more than two or three runs per team to be a “washout.”

Billy Maloney passed away, at age 82, on September 2, 1960, in Breckenridge. He is buried in North Attleboro, Massachusetts, where he spent many of his formative years and where he met his wife, the former Theresa Brennan.