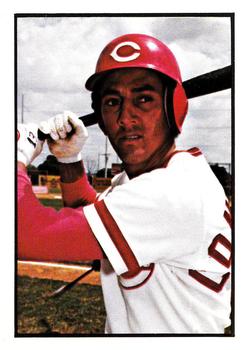 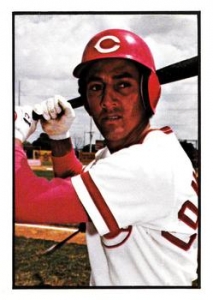 It’s called the fall classic, and the 1975 World Series was indeed a “classic.” The Series waged between the Cincinnati Reds and the Boston Red Sox was one of the more memorable championship battles, as a single run decided five of the seven games. Cincinnati shortstop Dave Concepcion entered the Series hoping that the old saying “third time is a charm” would prove true. He had been to two other World Series, losing out both times: first to Baltimore in 1970 and then to Oakland in 1972.

In 1975 Boston won Game One at Fenway Park, shutting out the Reds by a 6-0 score, and the Reds were looking to balance the ledger before the Series headed to the Queen City. It was a rainy day in Boston on October 12 for Game Two. But the inclement weather did not hinder Boston starter Bill Lee. He held the Reds to one run and was clinging to a 2-1 lead entering the ninth inning. But after Johnny Bench’s leadoff double chased Lee from the game, Dick Drago and his blazing fastball moved to the hill.

After Drago retired Tony Perez on a groundout to shortstop with Bench taking third and George Foster flied to short left field, Concepcion came to bat with two outs and the tying run 90 feet away. Concepcion hit a 1-and-1 fastball into the dirt and the ball bounced high toward second base. Boston’s Denny Doyle raced to his right and backhanded the ball, but it was too late for the second baseman to make a play. Bench scored the tying run, and Concepcion was on first. Red Sox fans in the Fenway Park crowd fell silent. Concepcion stole second base, sliding past the bag but getting back safely. Ken Griffey then doubled him home, and the Reds won 3-2 to even the Series. “I was just looking to make contact,” Concepcion said later. “That’s all you can do in a situation like that against a fastball pitcher like Drago. I knew it was a hit once I got it past the pitcher.”1

David Ismael (Benitez) Concepcion was born on June 17, 1948, Ocumare de la Costa, Aragua, Venezuela. His father, a truck driver, was against young Dave’s pursuing a career in baseball, instead hoping that he would make a living as perhaps a lawyer, banker, or doctor. After attending Agustin Codazzi High School, Dave worked as a bank teller and played for a local amateur baseball team. His coach, Wilfredo Calvino, was a scout for the Reds, and despite his father’s wishes, young Concepcion signed a contract with Calvino in September 1967 and joined Tampa in the Class-A Florida State League in 1968.

Concepcion’s time in the Reds’ minor-league chain was brief; by the end of the 1969 season he was playing for Triple-A Indianapolis. The 21-year-old hit .341 for the Indians in 167 at-bats, and showed a high aptitude on the basepaths. “Concepcion has the best baserunning instincts I’ve ever seen in a youngster,” said Indians manager Vern Rapp. “He stole 11 bases in 12 attempts and he was only with us about a month.”2

Concepcion was promoted to the Reds for the 1970 season, but he faced veteran competition at shortstop in Woody Woodward and Darrel Chaney. When Concepcion showed up at camp, standing 6-feet-2 and weighing just 155 pounds, Pete Rose joked that he wouldn’t be in danger of pulling a muscle in his legs, that instead it would have to be a pulled bone. But Rose also acknowledged, “They tell me that the kid can play shortstop with a pair of pliers.”3

Reds rookie manager Sparky Anderson took a liking to the youngster, as did hitting instructor Ted Kluszewski. Anderson made Concepcion the starter, mostly for his defensive ability. Anderson didn’t expect much offense from his young shortstop. But when Concepcion’s batting average rose to .270 in May, Kluszewski commented, “I’ve been saying all along that the kid’s gonna be a pretty good hitter.”4

Concepcion’s unexpectedly good hitting could not keep him in the starting lineup. He made 14 errors through mid-June, and Anderson replaced him with the dependable Woodward. Woodward was a valuable commodity for the Reds, able to play every infield position and play them well. He solidified the position for a while, but by the time the second half of the season began, Concepcion was back in the lineup. He made only eight more errors and batted a respectable .260 for the season. The Reds steamrolled through the National League West Division and had little trouble sweeping Pittsburgh in the NLCS, holding the Pirates to three runs in the three games. They were not as fortunate in the World Series, losing in five games to the Baltimore Orioles.

Concepcion missed most of the 1971 exhibition season with a badly sprained right thumb, and when he returned to the team in late April, he was used as a utilityman, playing second base, third base, and the outfield. He got his shortstop job back in early May but struggled at the plate that season and in 1972 with .205 and .209 batting averages. His career got an indirect boost after the 1971 season when a big trade brought second baseman Joe Morgan from the Astros. Concepcion and Morgan established themselves as one of the better keystone combinations in major-league history. As teammates with the Reds, they appeared in four All-Star Games, starting three, and won two World Series.

Concepcion was his own worst critic, and at times his being hard on himself caused subpar play to further spiral downward. Sparky Anderson decided that he needed a big-brother influence, and asked veteran Tony Perez to room with the youngster and mentor him. “He cannot stand 0-4 day. It kill him. I tell him very simple thing. ‘Don’t get your head down.’… ‘If you don’t hit now, you will next time.’… Things like this. Always I try to pick him up.”5 Perez also felt that marriage helped Concepcion settle down. (Dave and his bride, Delia, were married in 1972. They had three children, David Alejandro, David Eduardo, and Daneska.)

Whatever the reason, Concepcion emerged as a top-flight player in 1973. He was named to the All-Star team for the first time. He batted.287 and provided some punch at the bottom of the Reds’ lineup. He posted the first five-hit performance of his career against San Francisco on July 5 – hit number five, in the bottom of the ninth inning, driving in the winning run.

Unfortunately for Concepcion and the Reds, his season was curtailed by an injury. On July 22 the Reds were breezing to a 6-0 victory over Montreal at home. Concepcion was having a fine afternoon with three hits and two runs scored. On first base in the seventh inning, he took off as Denis Menke hit a smash to Expos shortstop Larry Lintz. As Lintz threw Menke out at first base, Concepcion never stopped and raced to third base. As he slid into the base his left leg folded underneath him. The fibula, a long bone between the knee and ankle, was broken and his ankle was dislocated. His season was over. “It probably cost us the league championship,” said Rose.6 The Reds won the NL West, but lost to the New York Mets in the NLCS without their All-Star shortstop.

Concepcion rehabbed while playing winter ball in Venezuela. He came back healthy and began a string of four years (1974-77) in which he won a Gold Glove. In 1974 he had his first big offensive season, smacking 14 home runs and driving in 82 runs, while batting mostly sixth or seventh in the lineup. Concepcion brought another dimension to the Reds in addition to his offensive and defensive skills. Beginning in 1973 he stole 20 or more bases in six consecutive seasons, pilfering 41 in 1974.

The Reds finally reached the summit in 1975 and 1976, winning back-to-back World Series. In 1975 Concepcion hit .455 in the NLCS against the Pirates but, only .179 in the tense and gripping World Series against the Red Sox. The next year he hit .357 in the Series against the Yankees with a triple and three RBIs. On a team filled with All-Stars and future Hall of Famers, Concepcion was playing at a high level at the apex of his career. Former Brooklyn Dodgers great Pee Wee Reese, a Hall of Fame shortstop himself, offered a synthesis of Concepcion as a shortstop: “Mark Belanger may be a little smoother then Concepcion. Larry Bowa is very quick. Rick Burleson is a leader type. Bill Russell has an accurate arm. But no one does everything as well as Concepcion. It’s possible that no one ever has.”7

Reds third-base coach Alex Grammas agreed with Reese’s assessment. Grammas had worked with Concepcion since Dave was a rookie, helping him to hone his craft. “There are some mighty good shortstops in the league today,” said Grammas. “But Concepcion is a notch ahead of them all in all-around ability because his bat is stronger and his range in the field is greater.”8 Concepcion and Grammas had such a solid relationship, that Dave’s first son, David Alejandro, takes his middle name from Grammas.

Concepcion also famously used Riverfront Stadium’s artificial surface to his advantage. He started to develop a pain in his throwing arm, and perfected the art of throwing the ball on a bounce off the artificial turf to the first baseman. It was extremely helpful to him on groundballs hit in the hole between shortstop and third base. “I didn’t invent that throw,” Concepcion said. “I saw another fellow do it. I saw Brooks Robinson do it to Lee May here in 1970. Then when my arm hurt, I decided, ‘Why not try it?’”9

After a couple of second-place finishes, in 1979 the Reds won the NL West to cap off the decade of the 1970s, but lost the NLCS in a three game sweep to Pittsburgh. By that time, many of the cogs in the Big Red Machine had moved on. Perez was the first to go, in a deal with Montreal. Rose left via free agency in 1978, the same year Anderson was fired. Soon Morgan and Cesar Geronimo would be gone. But Concepcion could still play. “The other people move away, and all of a sudden you notice the antique work of art in the corner,” Bench said of Concepcion.10 Concepcion posted career highs in home runs (16) and RBIs (84) in 1979. He also claimed his fifth and final Gold Glove Award.

Concepcion remained the Reds’ regular shortstop through the 1985 season and made the last of his eight All-Star teams in 1982. In that season’s All-Star Game, in Montreal’s Olympic Stadium, he hit a two-run homer off Boston’s Dennis Eckersley, and was named the game’s Most Valuable Player. Before he hit his second-inning homer, he spoke with All-Star teammate and fellow Venezuelan Manny Trillo of the Philadelphia Phillies, “I told Manny, ‘I got a feeling I’m going to hit one out of the ballpark.’ He kidded me, but I said, ‘I’m gonna do it.’”11 And he did.

Concepcion retired after the 1988 season, having played his entire major-league career with the Reds. His successor at shortstop, Barry Larkin, began his own 19-year career in 1986, and eventually was voted into the Baseball Hall of Fame. Concepcion was inducted into the Cincinnati Reds’ Hall of Fame in 2000, and his number 13 was retired by the Reds on August 25, 2007. Said Joe Morgan, “He’s the greatest shortstop I’ve ever played with or I’ve ever seen.”12

In retirement, Concepcion returned to his native Venezuela, and later managed his hometown Aragua Tigers. Later, he became an executive in a trucking business.

Concepcion continued a fine lineage of shortstops from Venezuela. He grew up idolizing Chico Carrasquel and Luis Aparicio and trying to emulate them in the field. Later, countrymen Ozzie Guillen and Omar Vizquel grew up fantasizing about playing baseball in the major leagues like their hero, Dave Concepcion. Vizquel paid homage to his boyhood icon by wearing the number 13, saying Concepcion was “the one that I liked, the one that I looked up to.”13

This biography is included in the book The Great Eight: The 1975 Cincinnati Reds (University of Nebraska Press, 2014), edited by Mark Armour.