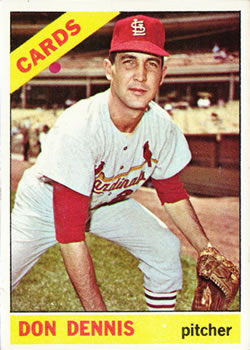 Don Dennis was a right-handed relief pitcher with the St. Louis Cardinals in 1965 and 1966. He was the winning pitcher in the inaugural game at Busch Stadium II. The sinkerballer appeared in 79 major-league games, compiling a 6-5 record with a 3.69 ERA.

Donald Ray Dennis was born on March 3, 1942 in Uniontown, Kansas, a small rural town in the southeast part of the state. He was the only child born to Donald Leroy and Addie Maxine (née Holt) Dennis. Donald Sr. tended to the family’s 800-acre farm and drove a school bus while Addie operated a beauty salon.1 Don later recalled his father, a fan of the St. Louis Cardinals, carried a radio on his tractor so he could listen to the games.2

Don attended Uniontown High School. He starred in football as an All-State quarterback, played basketball, and pitched for the Eagles’ baseball team. By age 17, the hard-throwing right-hander showed dominance on the mound, striking out 27 of the first 30 batters he faced while hurling for the Pittsburg, Kansas American Legion team.3 He was named to the 1959 Kansas American Legion All-Star team and took on the best players from Oklahoma.4 As a high school senior, Don won 20 of Uniontown’s 22 games.5 He pitched the team to the District Championship, throwing a no-hitter while striking out 15 versus Altoona.6 After graduation, he played in the National Baseball Congress tournament in Wichita, Kansas. In one game, Dennis picked up the save for his Uniontown club and against Salina, for whom Satchel Paige pitched two innings of scoreless relief.7 Scouts had been following Dennis, and the tournament increased his stock further.

Dennis turned down college football scholarships and overtures from professional baseball teams and ultimately accepted a baseball scholarship at the University of Kansas.8 After one semester, he transferred to Emporia State University, where he played in 1961. On May 11, Dennis threw the first six innings of a combined no-hitter for Emporia, striking out 16 of the 19 batters he faced.9 That summer, he played for the Bronson Broncos, an amateur club. Charley Frey, a St. Louis Cardinals scout, had followed Don dating back to his Uniontown days. In August 1961, Dennis attended a two-day tryout at Busch Stadium in front of club officials, and Frey signed him to a contract.10 The Iola Register reported his bonus to be $20,000.11

After spending 1962 spring training with the Cardinals in Homestead, Florida, Dennis was assigned to the Winnipeg Goldeyes of the Class C Northern League. In 24 games (20 starts), he threw 145 innings, compiling a 10-7 record and 4.47 ERA. In October, Dennis was promoted to the Cardinals’ 40-man roster and pitched with the team’s winter instructional league club in Florida.

The 21-year-old hurler made the jump to the Class AA Tulsa Oilers of the Texas League for the 1963 season. In 48 contests (5 starts), Dennis pitched 124 innings with a 6-4 record and 3.48 ERA. He was a September callup to the Cardinals but did not appear in a game and then returned to Florida for more seasoning in the winter instructional league.

Dennis returned to Tulsa to begin the 1964 campaign. His manager, Grover Resinger, told him that he would likely get to the majors faster as a relief pitcher.12 All but two of Dennis’s 38 appearances with Tulsa were out of the bullpen. In 105 innings, he had an 8-5 record with a stellar 2.06 ERA. Dennis credited Resinger with teaching him to change speeds and keep hitters off-stride and praised Clyde King, a minor league pitching instructor, for showing him how to throw a sinker.13 Dennis was eventually promoted to the Class AAA Jacksonville Suns of the International League. In 18 relief outings, he had a 3-1 record and 2.82 ERA in 35 innings.

Dennis made his major league debut on June 18, entering the game in the bottom of the ninth inning with the visiting Cardinals leading the Milwaukee Braves 4-2. Joe Torre was on first base, and there were no outs. Dennis induced a double-play off the bat of Gene Oliver, then gave up a single to Mike de la Hoz. Milwaukee outfielder Mack Jones then homered to tie the game before Eddie Mathews was retired to end the inning. Though Dennis blew the save, he picked up the win when the Cardinals took the lead in the 10th on a homer by Bill White.

Manager Red Schoendienst went back to Dennis often and used him in high-leverage situations. He pitched in 12 of the Cardinals’ next 24 games, a stretch in which he carried a 1.98 ERA with three saves. He returned to Kansas at the All-Star break and took advantage of the time off by marrying his childhood sweetheart, Betty Krull, on July 12.15 In his second outing after the break, he picked up a three-inning save against the New York Mets, allowing only one hit while striking out three batters.

On August 2, the Cardinals hosted the Los Angeles Dodgers and took a 6-4 lead to the ninth inning. St. Louis starter Tracy Stallard allowed a single to John Roseboro, and reliever Hal Woodeshick walked Don Drysdale and Maury Wills to load the bases. Dennis was called upon to get out of the jam. The sinker-baller got Jim Gilliam to ground into a run-scoring 6-4-3 double play and then retired Jim Lefebvre on a ground out to nail down the save. “I came into that situation twice in the minors last season and managed to get out okay then, too,” said Dennis after the game, the reporter noting that young pitcher’s hands were still shaking.16

Dennis proved to be dependable throughout the rest of the season. He finished the year with 41 appearances, a 2-3 record, and 2.29 ERA in 55 innings. The Cardinals finished 80-81, seventh place in the ten-team National League, 16½ games behind the Dodgers.

Dennis spent the winter serving a six-month tour in the United States Army at Fort Leonard Wood, Missouri. He was honored by the St. Louis chapter of the BBWAA as the St. Louis Rookie of the Year and accepted the award at a dinner on January 31.17 When he reported to St. Petersburg, Florida for spring training in 1966, he developed right shoulder soreness and was diagnosed with a “slight muscle tear.”18 Dennis surmised that the excessive calisthenics performed with the Army may have contributed to the injury. He did not pitch in a Grapefruit League game until April 1, giving up four runs in of an inning against Detroit.19

When his teammates headed north to begin the season, Dennis stayed in Florida for 10 days to work in warmer weather.20 He joined the team in New York on April 19 and made his season debut the same day, striking out the Mets’ Lou Klimchock to earn the save.21 Schoendienst seemed to be cautious with Dennis, not using him again until May 4. On May 10, St. Louis Post-Dispatch writer Neal Russo wrote that Dennis’s arm was “virtually at top strength again.” On May 12, the Cardinals moved into their new downtown digs, Busch Memorial Stadium, taking on the Atlanta Braves in the inaugural game. The game went to extra-innings with the score tied at three. In the top of the 12th, Dennis was called in from the bullpen with runners on first and second and two outs. He retired Felipe Alou on a fly ball to end the inning. An RBI single by Lou Brock off Phil Niekro in the bottom of the inning made Dennis the winning pitcher. The right-hander made seven appearances in May, allowing only one earned run while striking out seven in 7⅓ innings. Two rough outings in early June, one of which included a three-run home run allowed to Roberto Clemente, ballooned Dennis’s ERA from 1.17 to 8.64. At the All-Star break, he had a 2-2 record, was two for four in save opportunities, and had an unsightly 6.27 ERA in 19 appearances.

After an impressive outing on July 19 in which he retired all eight Atlanta Braves he faced, Dennis received his first and only career starting pitching assignment against the Cubs on July 22. The righty acquitted himself well, going 5⅔ innings, scattering nine hits with two earned runs, one walk, and one strikeout. He left the mound with the game tied at 2-2 and was not involved in the decision; the Cards won 9-4. “Dennis looked 100 percent improved over last spring,” assessed pitching coach Joe Becker. “We shortened his stride and his ball has been sinking much better.”22

Dennis was used in more of a long-relief role and lower-leverage situations for the remainder of the year. He finished the season 4-2 with a 4.98 ERA in 38 appearances covering 59⅔ innings. “It was a frustrating year all right,” Dennis bluntly assessed.23 St. Louis finished with a record of 83-79, good for sixth place in the standings and 12 games behind the Dodgers. In December, the Cardinals traded Dennis and outfield prospect Walter Williams to the Chicago White Sox for catcher John Romano.

Dennis pitched in only two spring training contests for the White Sox in 1967, allowing four hits and three runs in 2innings.24 At the end of camp, he was optioned to the Triple-A Indianapolis Indians of the Pacific Coast League. In 46 appearances (all but one in relief), the right-hander threw 69 innings and was 5-5 with a 3.52 ERA. He missed two weeks during the season due to military duty.

Dennis was assigned to the White Sox new Triple-A affiliate, the Hawaii Islanders of the Pacific Coast League, to begin the 1968 season. In eight relief appearances, he pitched 15 innings with a 1.80 ERA. On May 11, it was reported that he was re-assigned to Evansville, but he did not pitch again that season.25

In 1969, the 27-year-old pitcher was assigned to the Tucson Toros of the Pacific Coast League after the White Sox again shuffled affiliates. Dennis made one spot start, but the rest of his 37 outings were in relief. He threw 80 innings with a 2-3 record and 3.71 ERA. He again missed two weeks in July due to military training. Don Dennis Sr. was battling cancer and had asked Don Jr. to come home and help take care of the farm and his mother.26 Therefore, Dennis called it quits on his professional baseball career after the ’69 campaign. In his two big-league seasons, he was 6-5 with a 3.69 ERA and eight saves. In his seven seasons in the minors, he was 34-28 with a 3.29 ERA. His son recalled that he would boast about being a .400 hitter in 1965.27 Indeed, Dennis was 2-for-5 that year and 3-for-17 for his career.

Dennis returned to Uniontown, where he was a lifelong resident. He and Betty raised four children: Robert, Shane, Janet, and Julie. Don spent a year or so helping out with the baseball team at nearby Fort Scott Community College, but that was the extent of his involvement in the game after hanging up his cleats. Shane played baseball at Wichita State University and pitched professionally in the San Diego Padres organization and for one season in Japan with Chiba Lotte. Don spent over 27 years working for the Kansas National Guard before retiring in 2000. He enjoyed golf, hunting, fishing, and traveling, in particular fishing trips to Minnesota with friends and family.

After a battle with cancer, Don Dennis died on March 22, 2007 in Fort Scott, Kansas at the age of 65. He is buried at Uniontown Cemetery in Uniontown, Kansas.

Special thanks to Shane Dennis for sharing information about his father’s life and career.

This biography was reviewed by Gregory H. Wolf and Bruce Harris and fact-checked by Kevin Larkin.

26 Personal communication between Shane Dennis and the author, March 1, 2021.

27 Personal communication between Shane Dennis and the author, March 1, 2021.